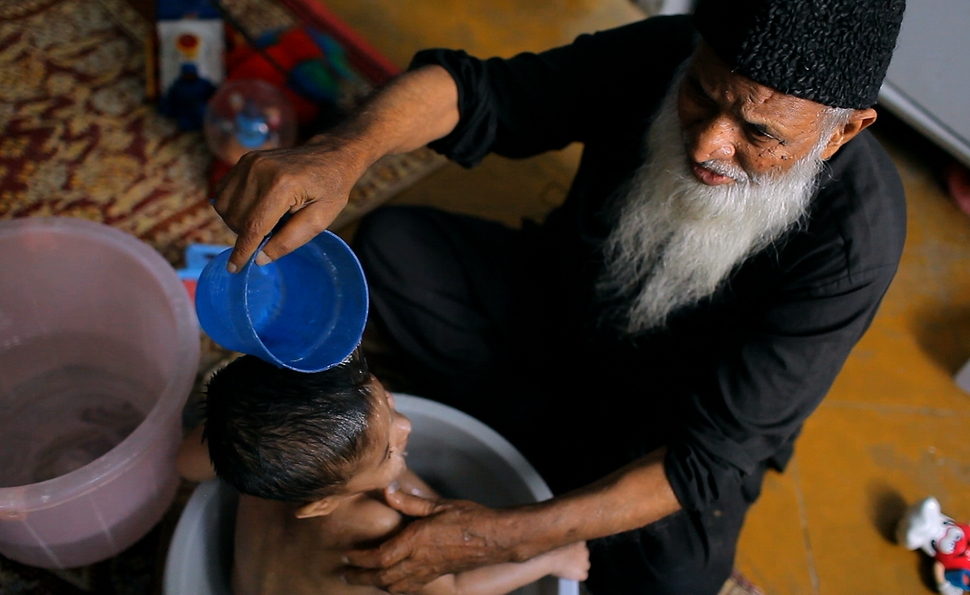 In These Birds Walk, Abdul Sattar Edhi is first seen sitting cross-legged on the floor with a red plastic bucket in front of him, scrubbing the emaciated bodies of orphaned toddlers who have the frailty of infants. This would not necessarily be the expected job for the 85-year-old head of one of Pakistan’s most prominent social-welfare organizations, but there’s a strong sense that this is ritual for Edhi, not a photo-op. Since 1951, when he worked out of one room in Karachi, Edhi has gradually built the Edhi Foundation into a world-renowned philanthropic organization, with services that include 24-hour emergency assistance, shelters for runaway children and the destitute, free medical care, and drug rehabilitation. Yet Edhi hasn’t receded behind a desk over the years, and he talks about himself with extraordinary modesty: “If you want to find me,” he tells the filmmakers, “look to ordinary people.”

A standard documentary about an organization like the Edhi Foundation would function largely as propaganda: a few case studies, some talking-head footage of Edhi and his employees, maybe a website in the closing credits where viewers can send their donations. But Omar Mullick and Bassam Tariq’s beautiful documentary favors poetry over prose: Rather than supplying information and statistics about the Edhi Foundation and its many tentacles—or even straightforward profiles of caregivers and receivers—Mullick and Tariq try for what Werner Herzog calls “ecstatic truth,” a heightened impression of reality rather than an advocacy doc or even fly-on-the-wall vérité. Viewers can walk away with something more precious than factoids: an emotional, aesthetically striking experience that cuts more deeply than words. And if they crave more information, that’s what the Internet is for.

These Birds Walk establishes its style with a gorgeous sequence of an orphan boy on the beach, punching the waves. The image suggests freedom, while hinting at the scenes of aggression to come. From there, the film toggles through a handful of individual subjects, introduced via sparingly used titles. The unofficial tour guide is Asad Ghori, a young ambulance driver who started at Edhi a few years earlier, following his parents’ death. He admits to having suicidal thoughts before taking the job, but the stresses of the work—which involve grueling either/or choices like picking up a runaway kid or dropping off a dead body—have given him a connection to other people that makes him feel less alone. He’s a lost boy collecting other lost boys; some have run away from home, while others don’t have a home to flee.

Of the children, the standout is Omar, a scrawny kid from a neighborhood so dire that a man Ghori asks for directions warns him against driving his ambulance there. Omar talks tough, but doesn’t have the muscle to back it up. In the film’s most remarkable sequence, he confronts the other runaways about his missing sandals, and plunges into a never-ending mêlée involving several other boys, all eager to prove their toughness. Abuse is a part of this boy’s everyday life, and the way he and other boys punch and kick each other, while remaining as vulnerable as all children are, is heartbreaking to witness.

These Birds Walk isn’t about lionizing Edhi and his philanthropic achievements—the man himself would likely bristle at the thought—because all that praise goes without saying. Instead, Mullick and Tariq’s camera celebrates the preciousness of the lives they capture, while mourning their tenuousness in kind; when Ghori drives one child back to his family, the boy’s uncle openly laments that he’d rather have received his corpse. The degree of formlessness comes as a consequence of shooting reality without jamming it into a pre-cooked narrative, but Mullick and Tariq are willing to sacrifice tidiness for art. Their film thrives in the exchange.