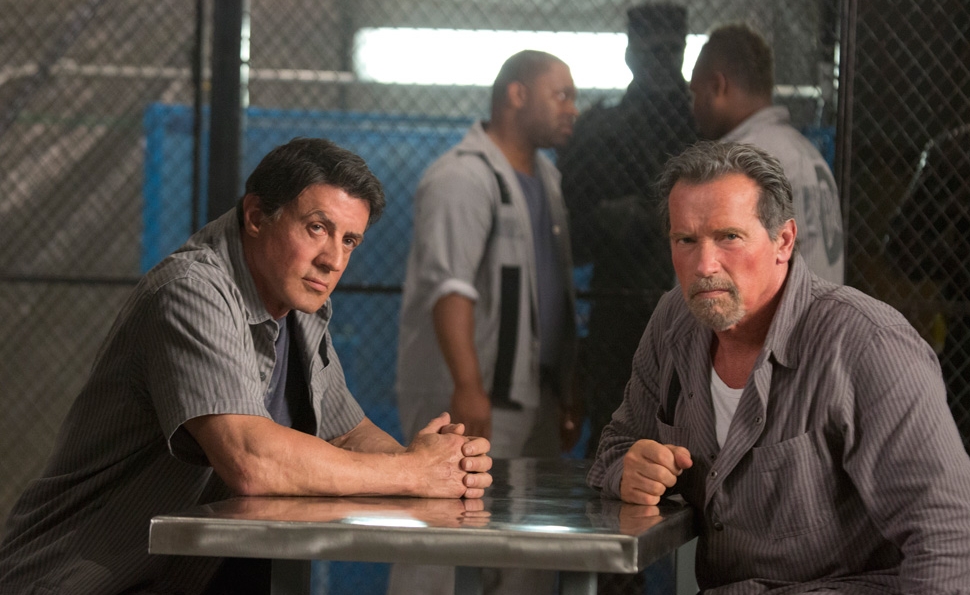 Whether it’s Billy Crystal meeting Robin Williams in Fathers’ Day or Frankenstein meeting the Wolf Man in Frankenstein Meets The Wolf Man, movie titans often team up after the public has grown tired of their solo adventures. So it is with Escape Plan, a film co-starring Arnold Schwarzenegger and Sylvester Stallone. It’s unlikely that any single film could have housed the action fixtures’ collective star power (to say nothing of their egos) back in the 1980s, when each brought muscles and firepower to action films on a regular basis. Times have changed, however. While Schwarzenegger took some time off to pursue other interests, action movies largely moved on from the sort of knuckles-and-machine-guns films Stallone and Schwarzenegger used to make, a development that allowed the two stars to share the screen, however briefly, in a pair of back-to-action-basics Expendables films (with at least one more on the way). Now comes Escape Plan, the pair’s first proper co-starring vehicle.

The film takes the long way to bringing its stars together, opening with Breslin (Stallone) serving hard time in a maximum-security prison, then engaging in some seemingly inexplicable behavior after landing in solitary confinement. One exploding vehicle in the parking lot later, he’s out. What gives? Turns out Breslin works as the deep-cover agent for a security firm whose job is to test the escapability of America’s toughest prisons—a job he’s executed with a 100-percent success rate. Breslin’s partner Lester (Vincent D’Onofrio, inexplicably using hand sanitizer in virtually every scene), speaks of him proudly as the firm’s “resident Houdini,” and doesn’t hesitate to send him on an especially challenging job at a prison so secret, virtually no one knows its location, over the objections of fellow team members played by Amy Ryan and Curtis “50 Cent” Jackson.

Their worst fears seem to be confirmed when Breslin disappears from even their high-tech tracking systems. Where is he? Breslin wakes up in a futuristic prison filled with cameras, glass cells, high ceilings, and guards clad in black masks, one built to specifications he suggested himself in a book he penned on building an inescapable prison. (That’s one of the plot’s two clever touches; the other involves the prison’s actual location.) Slow to make friends—maybe it’s all the gravelly mumbling—Breslin is nonetheless aggressively courted by the goateed Rottmayer (Schwarzenegger), a fellow inmate with whom he hatches an… well, look at the title.

That setup seems to demand a process-focused breakout thriller. The past record of director Mikael Håfström suggests a film of tacky excess, à la 1408 and The Rite. But Stallone and Schwarzenegger have all the gravity here, and keep pulling Escape Plan in the direction of an old-fashioned tough-guy action film, one filled with nods to their onscreen pasts and offscreen exploits. It’s filled with fan service, from its stars’ fistfights—though the decades-old question of who could beat up whom remains unresolved—to their teasing repartee. They’re self-assured, self-aware icons having fun in the middle of an unapologetically dumb, problematically pokey movie. (Joining them in their fun is, surprisingly, Jim Caviezel as a fussy, sadistic warden.) Neither star appears to be in his prime, but both have the mindsets of aging athletes, learning to do more within the limitations they now face; if nothing else, Escape Plan is a reminder of why they became stars in the first place. Stallone remains the most charismatic grunter onscreen, and when Schwarzenegger picks up a machine gun, it’s like Jascha Heifetz picking up a violin: This is the instrument that made him famous, and he knows how to play it better than just about anyone. Escape Plan’s appeal has everything to do with how much nostalgia those sights and sounds stir. It’s small enough to make its stars look big again.