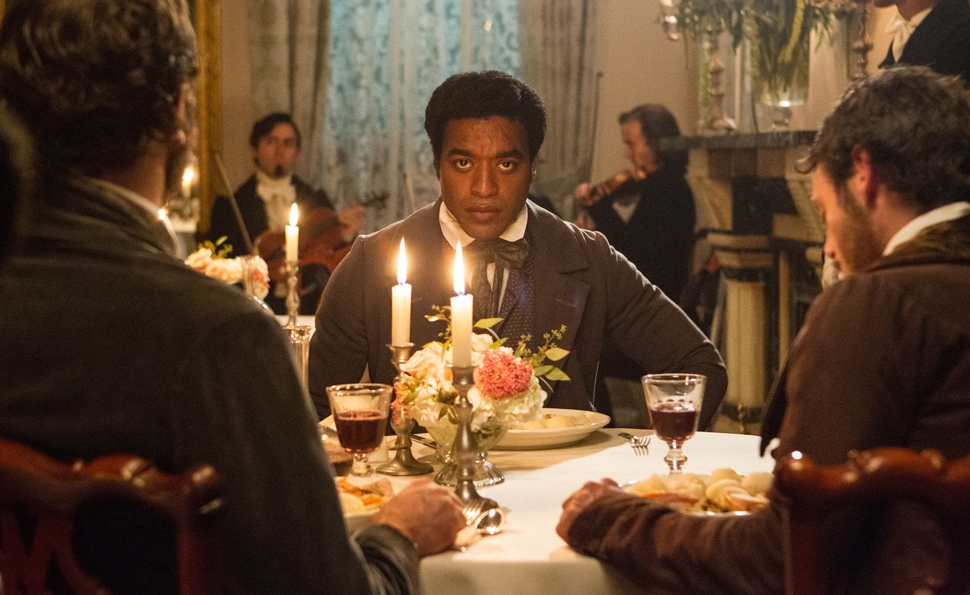 After being lured from home in Saratoga Springs, New York in 1841, then kidnapped in Washington D.C. and sold into slavery, Solomon Northup, a free black man, winds up in chains in a cargo hold of a riverboat heading south. In one of the many indelible images in Steve McQueen’s 12 Years A Slave, the camera focuses on the paddle wheel as it churns through water, abstracting the sound until it becomes an awful, pre-industrial grinding of the gears. The abduction of free northern men to serve Southern slavers is a literal black market, but 12 Years A Slave emphasizes that it’s part of a larger business, where bodies are sold to work in the fields and traded to settle debts, and white men are allowed to handle their property any way they wish. Whatever moral misgivings they might have—and it does tug at the conscience of even the most sadistic slaveholder here—can be justified by the legitimacy of paperwork, both legal and Biblical. It’s just business, and Solomon is no more or less significant than a cog in the machine.

12 Years A Slave is a bruising emotional experience, but it’s often cool to the touch, directed with same rigor that McQueen brought to Hunger, his stark recounting of a Northern Irish prison strike, and Shame, which worked to mirror the joyless obsessions of a sex addict. Scenes of immense cruelty and sadism are presented in long, unblinking, pitiless takes, and emotional eruptions are swallowed by an atmosphere of unyielding despair. There’s passion and drama at every turn, yet McQueen does everything he can to stay at a clinical remove until the last possible moment. His strategy isn’t to emphasize Solomon’s emotional journey, nor those of his fellow slaves, but to emphasize a plantation setting that absorbs it as readily as the oppressive heat. This is not a place where cries of anguish and pleas for justice are heard; this is a place where hope gets extinguished.

Based on Northup’s autobiography, 12 Years A Slave wastes little time in whisking Solomon (Chiwetel Ejiofor) from the comforts of family and material wealth to the slave auctions of New Orleans. A gifted violinist, Solomon gets an offer from two gentleman to perform in a traveling circus; after a night of celebrating over dinner and too much wine, he wakes up shackled in a basement cell, and gets severely beaten for protesting his case. Shuffled out of the city in the dead of night, he and other abductees are shipped south, where an agent (Paul Giamatti) has them stripped bare and put on ghoulish display for slavers to examine like farmers at a livestock auction. There and elsewhere, shows of deep human anguish, like a mother facing separation from her children, are treated as an annoyance rather than stoking any empathy from customers.

Solomon spends time with three different slaveowners, but the first one, William Ford (Benedict Cumberbatch), is almost the cruelest for his kindness. Ford appreciates Solomon’s worldliness and talent—he’s dubbed “an exceptional nigger,” mostly to his peril—and offers him some agency on the plantation, even gifting him with a new fiddle. But the hope that act instills in Solomon acts as its own kind of whip, in that it keeps him in line—and for good measure, Ford stands at a distance while his less-cultured henchmen savagely beat Solomon. There are no such illusions when Solomon lands with Edwin Epps (Michael Fassbender), a notoriously vicious “slave-breaker” who weighs the cotton picked after each day, and lashes everyone who falls short of his quota.

12 Years A Slave has the pull of one of Alfred Hitchcock’s “wrong man” scenarios, in which an everyman is mistaken for someone else, and dragged through a nightmare he cannot dispel with explanations. But McQueen and screenwriter John Ridley treat it more as straight-up horror, an abduction that has Solomon witnessing and experiencing absolute, unambiguous evil. McQueen makes this evil as explicit and forceful as he can: The longest shots in the film are reserved for violations of the flesh, and McQueen doesn’t want to give the audience quarter by sparing a single lash. This is not an occasion for restraint.

At the same time, McQueen and Ridley do not let viewers forget these are human beings, slaves and slavers alike, and whether they’re coping with savagery or perpetrating it, they don’t all behave the same. While Fassbender summons the blue-eyed sadism of Henry Fonda in Once Upon A Time In The West, his feelings for a favorite slave (Lupita Nyong’o, who gives a stunning performance) are simultaneously genuine and thick with self-loathing. For his part, Ejiofor’s Solomon clings to his dignity and sense of self, but others are swamped by a consuming despair that’s perfectly in line with their circumstances. They pray for different forms of mercy and deliverance.

There are ways to make Northup’s story more palatable, to soften the violence or buttress his nobility, but the gravity of the subject matter doesn’t force McQueen into prestige-movie timidity. 12 Years A Slave is not that far removed from the exploitation luridness of Django Unchained, but without the genre quotation marks, McQueen’s use of ultra-violence operates to repulse rather than arouse. His film is a tough, soul-sickening, uncompromising work of art that makes certain that when viewers talk about the evils of slavery, they know its full dimension.