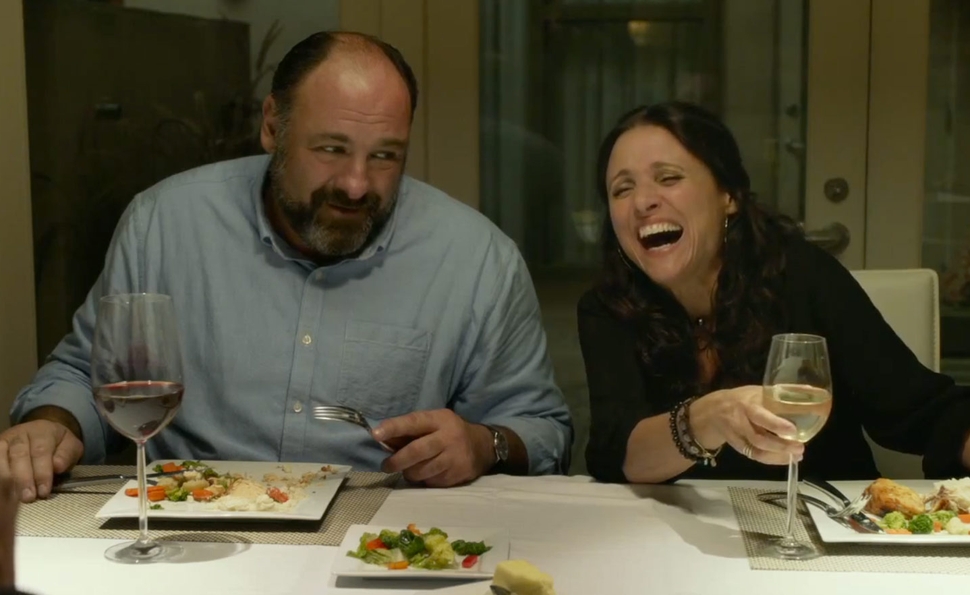 Nicole Holofcener’s maddening romantic comedy-drama Enough Said is afflicted with a terminal case of what Roger Ebert dubbed “the Idiot Plot,” in which a single reasonable sentence uttered in a rational tone could easily, diplomatically resolve the film’s core conflict, yet its asinine plot machinery insists on those words never being spoken. The plot revolves around the budding relationship between divorced masseuse and mother Eva, and Albert, the ex-husband of Eva’s new client and friend, Marianne. Marianne is a superstar poet unhealthily obsessed with bashing her ex-husband to anyone who will listen, and she doesn’t realize that her masseuse/new bosom buddy is dating the man Marianne devotes much of her time to disparaging. Rather than simply admitting she recently started dating Marianne’s ex-husband, and would appreciate her either not insulting him or finding a new masseuse, Eva feigns obliviousness, even when that threatens to destroy both new relationships, and the film.

It’s tempting to think there would be no movie if Eva were simply honest and open with Marianne at the appropriate time, but writer-director Holofcener and a supremely qualified cast are more than capable of making a funny, insightful, mature film about middle-aged relationships that doesn’t turn on ostensibly mature characters behaving like creepy children. Coming to terms with a new partner’s romantic history is fertile dramatic and comedic territory; it doesn’t need to be contorted into the sort of nonsense that necessitates a protagonist ducking behind shrubbery to avoid being seen. What could have been a low-key character study is undone by an abundance of high-concept idiocy. The film is torn between the cerebral pleasures of Holofcener’s previous explorations of the female psyche, like Walking And Talking, Lovely & Amazing, Friends With Money, and Please Give, and the farcical formula of Three’s Company, with its emphasis on deception, miscommunication, and easily resolved conflicts.

The terrific Julia Louis-Dreyfus stars as Eva, who faces a major life change when her teenage daughter goes off to college. She meets James Gandolfini’s Albert, a smart and gentle man, at a party, as well as his ex-wife Marianne (Catherine Keener), whose poetry wins her praise from the likes of Joni Mitchell, but who clings to Eva as her only real friend. Marianne is a perversely conceived character: an enigmatic poet who’s successful enough to be recognized by fans on the street and live a life of wealth and leisure, but who nevertheless seems stubbornly obsessed with her ex-husband. She’s intimidatingly accomplished, but also more than a little pathetic. Even if Marianne weren’t constantly complaining about Albert in ways that reflect worse on her than on him, it would be difficult to imagine what attracts Eva to her as a friend, beyond pity and a morbid desire to learn as much about her new beau’s dark side as possible. Marianne is thoroughly unlikable and weirdly one-note. Keener fails to deliver a convincing performance, but that's because she’s been given an impossible role to play.

With Keener cursed with a bad role and Louis-Dreyfus intermittently reduced to tired sitcom shenanigans, Enough Said has an enormous asset in Gandolfini, who delivers a performance of tremendous honesty in a painfully artificial context. Gandolfini plays Albert as a man at peace with himself and his place in the world. He’s the film’s strong, still center, a reliable ballast in a film destabilized by bum notes and wrong turns. As a middle-aged couple with plenty of road behind them, and uncertain futures ahead, Albert and Eva face enough challenges without the pained miscommunication Holofcener’s script foists upon them.

Gandolfini spent much of his film career delivering stellar work in muddled independent movies. He was habitually better than his material. Enough Said falls snugly into that category. Gandolfini delivers a funny, poignant performance befitting a great actor. It’s heartbreaking that the film doesn’t measure up to his exemplary turn.