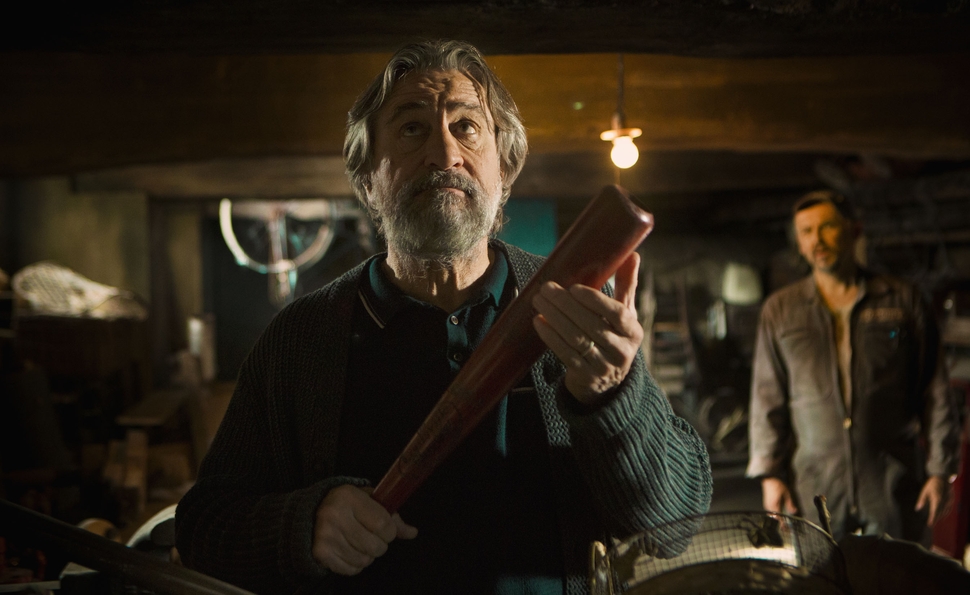 Luc Besson’s underwhelming culture-clash comedy The Family revolves around a comic conceit—in this instance, “comic conceit” is a nice way of saying “one joke”—that was much funnier in John Waters’ inspired Serial Mom. The notion is that any transgression, even something as minor as showing up late to an appointment and copping an attitude, is punishable by a vicious beating and/or death. The crucial difference is that Serial Mom is a well-pitched satire of sunny suburban domesticity and conformity taken to murderous extremes, while The Family comes close to being a full-on endorsement of vigilante justice and enforcing social niceties through the business end of tennis rackets and baseball bats.

Adapted from Tonino Benacquista’s comic novel Malavita by director Luc Besson and Michael Caleo, The Family casts the now more or less perpetually self-parodying Robert De Niro as Giovanni Manzoni, a powerful, feared mobster forced to go into hiding in Europe under the witness-protection program after testifying against a fellow mobster. With him are his wife Maggie (Michelle Pfeiffer), daughter Belle (Dianna Agron), and son Warren (John D’Leo).

The family has managed to remain underground for years in Europe, despite being roughly as inconspicuous as rodeo clowns on unicycles, screaming profanities through the town square. The film opens with the family trudging wearily to another small town in Europe, this time a little village in Normandy that most would consider quaint and picturesque, but that the film depicts as a trial of the damned for a family raised on spaghetti and Coca-Cola.

The displaced Americans respond to the never-ending gauntlet of slights and insults that greet them in their new home with crimes ranging from arson to battery to murder. Giovanni, posing as a writer and going under the name Fred, takes the lead, but the whole family participates in felonious endeavors. When the local grocer treats Maggie like a typical boorish American (because she is a typical boorish American), she responds by blowing up his store. When a dorky French teenager with bedroom eyes and a lascivious gleam puts the moves on Belle, she beats him viciously (and the film would like to imagine, hilariously) with a tennis racket. The more calculating, less violent Warren, a whip-smart 40-year-old fixer in the body of a precocious 14-year-old, quickly comes to dominate his high school’s criminal underworld. He’s so savvy, he doesn’t need to resort to violence, whereas his less cerebral father treats vicious assaults as a first, rather than last, resort.

The film’s surprisingly pokey screenplay pits cultural stereotypes against one another in a comic death-match: it’s ugly Americans enforcing their cultural norms through assault vs. slimy caricatures of the French as snooty, dismissive elites who condescend to foreigners. This should be crowd-pleasing, rabble-rousing, conscience-clouding fodder, especially with a populist entertainer like Besson in the director’s chair, and an unexpectedly low-key De Niro once again spoofing his image in the lead role. Instead, the film is curiously joyless and inert. It feels as tired and run-down as its central family, and derives even less pleasure from their crimes. The film picks up a bit with a meta-textual third-act plot development shamelessly playing on the storied joint history of De Niro and executive producer Martin Scorsese, but otherwise, the film has the curious distinction of being both too shameless and not shameless enough. It’s stuck halfway between gleefully endorsing the family as ghoulishly over-the-top enforcers of morality, and satirizing them as the ultimate manifestation of American cultural imperialism run amok.

The Family treats nearly fatal beatings as jokes and corpses as punchlines, yet there’s something strangely restrained about the film, especially considering it emerged from Besson’s hyperactive imagination. Besson hasn’t matured, exactly, he’s just slowed down a little, like an aging jock whose body has begun to decay without its owner acquiring any wisdom or perspective along the way.