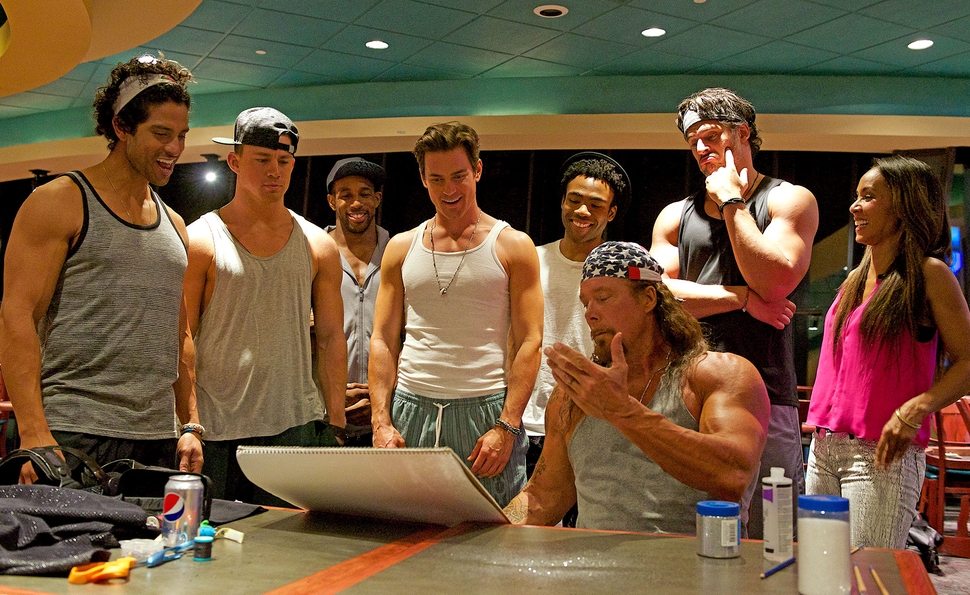 They aren’t male strippers, they’re male entertainers. Big Dick Richie (Joe Manganiello), one of a crew of dancers taking the scenic route to a convention in Myrtle Beach, makes this distinction to a group of middle-aged women who are turning the dancers’ visit into a wine kegger. Richie bristles at the label “stripper,” but Magic Mike XXL, the irresistible sequel to Steven Soderbergh’s 2012 sleeper hit, means to put the emphasis on the word “entertainer.” These are men who cannot merely bump-and-grind their way through events—though they’re certainly excellent at doing that—but who have to be disarming, silly, and self-deprecating, too, more a full-scale charm offensive than a desultory striptease.

Pleasure is their business, and they can’t help giving it whether they’re off the clock or on. They have fun together, and they bring the fun wherever they turn up, whether it’s a drag show, a private club, a parlor room in old-money Charleston, or a humble mini-mart. More than the first Magic Mike, XXL is a loose, shambling party bus—or party organic fro-yo food truck, to be more exact—and everyone’s having a great time. These are entertainment professionals, after all, and the audience is in good hands.

It’s also a victory lap for Channing Tatum, who has now fully succeeded at bending the world to his will. Early in his career, he seemed like a disposable dance-movie type—electric on the floor, a block of wood off it—but he’s grown more confident and self-possessed, and able to play dumb with a wink in comedies. With Matthew McConaughey and Alex Pettyfer out of the picture—the latter a clear case of addition through subtraction—Magic Mike XXL has Tatum as the main attraction, and he’s become the Fred Astaire of simulated humping. Two years after the events of the first film, Mike is living out his dream of being a custom furniture designer, but the day-to-day is tough, and he can’t even afford health insurance for his sole employee. One night at the workshop, Ginuwine’s “Pony” comes up in the shuffle and the spirit moves him to dance once again. When the gang (including Manganiello, Matt Bomer, Kevin Nash, and Adam Rodriguez) blows through town on their way to Myrtle Beach, it takes zero cajoling to draw Mike out of retirement. In their travels, they eventually find a replacement for McConaughey’s ringleader: Rome (Jada Pinkett Smith), a wealthy businesswoman who’s running her own exclusive operation in Savannah.

Though Soderbergh passes the reins to director Gregory Jacobs (Criminal), his first A.D. on every production since 1993’s King Of The Hill, he shot and edited Magic Mike XXL under pseudonyms (Peter Andrews and Mary Ann Bernard, respectively) and the hang-out vibe of the first film mostly carries over to the second. Jacobs and Soderbergh allow a little too much downtime between dance numbers, which in turn makes the multi-stage bonanza of a finale also seem overextended, but they promised XXL, and XXL is what they deliver. Beyond the broad scale and variety of the routines, the big difference between the first and the second Magic Mike is the inclusive spirit that animates the sequel. The guys find different audiences wherever they go, and their lovable dum-dum spirit isn’t narrowly directed toward any one demographic, which contrasts sharply with the straight-bro antics of Entourage. It’s a movie for everyone (over the age of 17, unless accompanied by a permissive parent or guardian).

Without McConaughey and his Tampa nightclub, Magic Mike XXL not only has to get creative about where to hit its action beats, but it naturally places more of an emphasis on individual contributions. The best sequences in the movie have a private audience, like Mike working the hardware to Ginuwine, or a semi-private audience, like Manganiello’s improvised performance for a mirthless convenience-store clerk, which ends with the best capper since “I’ll have what she’s having” in When Harry Met Sally.... And the film yields the floor to Andie MacDowell, in full sex, lies, and videotape drawl, as a teasing divorcée, and to Pinkett Smith as a commanding MC. Even the finale connects each dancer’s performance in an elaborate daily-chain of choreography (by Alison Faulk) that culminates with Tatum taking the spotlight. All for one, one for all.