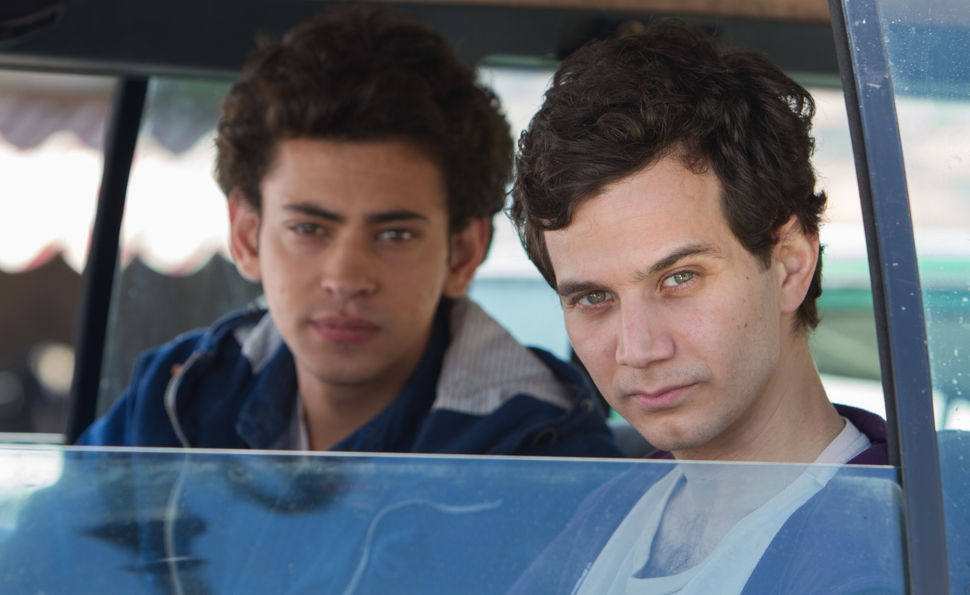 Israel is defined by its divisions, and by the persistent sense that the current divides can’t last forever, one way or another. Set in the ’80s and early ’90s, the Israeli film A Borrowed Identity considers what it’s like for a kid whose intellectual gifts give him a chance to pass through those divisions, while also considering the toll exacted along the way. A coming-of-age story adapted by Sayed Kashua from his novel Dancing Arabs (the film’s original title), A Borrowed Identity opens in 1982 as young Eyad (Razi Gabareen), a resident of the largely Arab Israel city of Tira, attempts to fix the antenna that will let his family pick up TV signals from the outside world, rather than subscribing to the ad hoc cable operation, complete with original programming, their neighbors run in the neighborhood. Eyad falls and injures himself, and soon he and his family become cable subscribers. Their attempt to listen to the outside world rather than the echo chamber of their own neighborhood is cut short by the dangers.

The cycle of repeated wisdom and infectious opinions plays out throughout A Borrowed Identity, which is seldom optimistic about finding an end to it. One day, a well-meaning American shows up to announce that Eyad’s class has been chosen to participate in a cultural exchange in which they’ll spend time with Jewish kids their own age. Later, returning home, Eyad announces “I brought my Jew.” Things go downhill from there, as a series of misunderstandings lead their visitor to believe Eyad’s family is trying to poison him. Directed by Eran Riklis (The Syrian Bride), A Borrowed Identity uses such moments of dark humor to great effect in the midst of an otherwise-sober film that keeps returning to the point that there’s no easy way to bridge the deep divide between Jews and Arabs.

Eyad comes to understand this better than most. Chosen to attend an elite boarding school, he moves to Jerusalem and begins to feel isolated by his background as the lone Arab in his school, living amid people who can’t even pronounce his name, but make fun of him for the way he confuses his “b”s and “p”s. Eyad makes some connections, however, first with Yonatan (Michael Moshonov), a young man with muscular dystrophy he’s assigned to help, and his mother Edna (Yaël Abecassis). Yonatan, whose mordant sense of humor Eyad takes as a survival tool, introduces him to bands whose leftist politics suggest that there are Jews who don’t want the current situation to continue. Ditto Naomi (Daniel Kitsis), a fellow student with whom Eyad falls in love.

For as much time as A Borrowed Identity spends showing Eyad building bonds, it spends just as much demonstrating the challenges those bonds face. Without excessive comment, the film watches as Eyad’s family comes to root for Saddam Hussein during Desert Storm. They’d previously considered him a loser as a leader, but they’ve reached the point where they just want to see a Muslim win for once. When Eyad calls Naomi to check on her, he has to use a false name. He chooses Yonatan’s, a choice that will take on additional implications as the film moves toward an ending that brings Eyad’s time growing up to an end, while reconciling nothing.

That unresolved quality, however suitable to the subject, occasionally makes Riklis’ film frustrating. Eyad’s family, so well-developed in the early sections of the film, fades into the background in the latter half, for instance. But the director’s observant approach to the material helps pave over the frustrations. The film watches as Eyad navigates a world where even his allies might be on his side for misguided reasons or for a limited time, and those on both sides have naïve notions about the possibility of living apart from the people they think of as enemies. He finds no solution, and neither did the man who created him: Kashua left Israel for America last year, after publishing a column with the headline “Why Sayed Kashua is leaving Jerusalem and never coming back.” But the film uses his experience to shed light on the complexity of the problem.