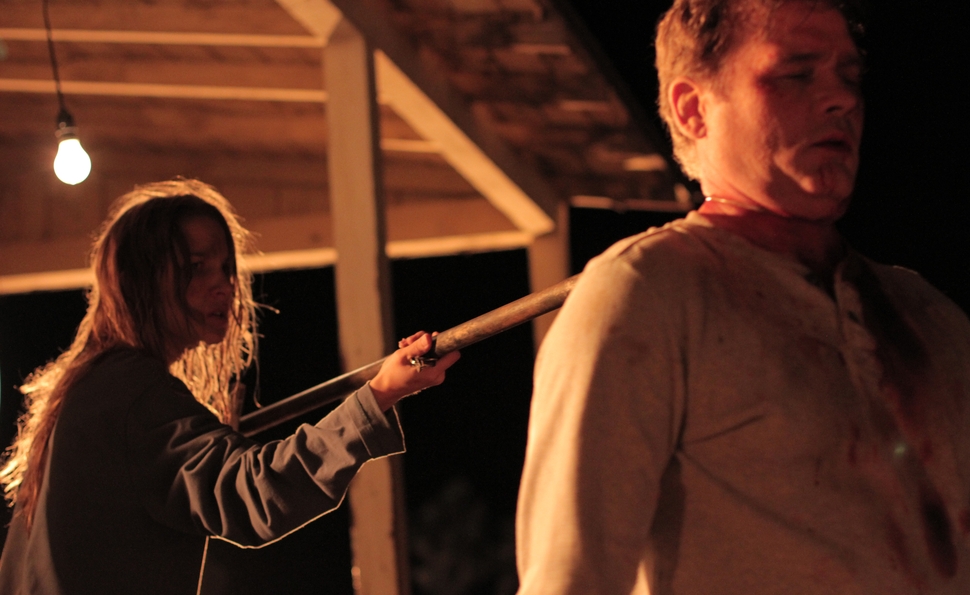 In the somewhat ignoble tradition of rape-revenge thrillers, the best entries recast a victimized protagonist as an agent of white-hot, womanly justice. Grindhouse artifacts such as Ms. 45 and I Spit On Your Grave behave like superhero movies, their heroines transformed by a pivotal, tragic assault into the hyperviolent avenging angel that the pervasive ubiquity of lecherous male sexuality demands. Even when these films get a little too hot on their own graphic images, the larger premise still promotes a feminist ideology. When men push a woman too far, as innumerable men do to innumerable women with untold frequency, her only proportional response is extermination. When put into practice smartly and tactfully, it’s a fairly radical proposition. A cop could investigate a rape and maybe even get a guy behind bars, but the only path to a real dismantling of the social architectures that allow for rape culture can be found through absolute destruction.

José Manuel Cravioto’s Bound To Vengeance wants so badly to work the femsploitation angle, but has no functional understanding of the crucial factors that distinguish between the good and bad apples. At every available opportunity, the film punishes its ostensible heroine for taking her welfare—and, more vitally, the welfare of her fellow women—into her own trembling, bloodstained hands. Cravioto’s got the sense and decency not to indulge in the leering gaze that the film baldly sets out to critique, and yet he’s still missed the larger point of these exercises in unpleasantness. Even as its protagonist rises from her own ashes to right the world’s wrongs, Cravioto never sides with her. And so Bound isn’t just a bad movie; it is a movie that is bad.

Cravioto’s not totally bereft of sympathy for Eve (Tina Ivlev), the indomitable survivor at the heart of the film. He picks things up with the young woman’s flight for freedom, mercifully excusing the audience from witnessing the implied extensive rapes, though recurring snippets of audio-flashbacks keep the memory close at hand. Chained up in a featureless rural basement, Eve finagles her escape by bludgeoning her captor (Richard Tyson, doing a bad impression of Heath Ledger’s Joker) with a brick loosened from a nearby wall. Two factors prevent her getaway, one practical and one ethical: She doesn’t have the keys to the only car capable of transporting her out of the scrubland, and her kidnapper suggested that girls just like her have been hidden strategically around the unnamed town nearby. Keeping her captor under her thumb through use of a handy dog-catcher’s pole, Eve forces him to bring her to the other sites so that she might free the remaining prisoners.

As feminism-tinged rape-revenge fantasies go, it sounds like it should be a slam dunk. Not only does Eve claim retribution, but she assists her fellow women in meting out unforgiving comeuppance as well. Cravioto, however, fouls up his own moral subtext by undermining all of Eve’s attempts to do the right thing. Behind door number one is a near-feral Nell type, who accidentally impales herself upon a poorly placed wrought-iron fencepost immediately following her liberation. If this is Cravioto’s idea of a joke, it’s a poorly- timed and sickeningly unfunny one. By the time Eve’s forced to kill the second freed girl in an act of self-defense, the viewer might wonder what, exactly, Cravioto’s trying to prove here. “Eve was the real villain all along!” would make for a thoroughly shitty plot twist, and if this be a nihilist’s shrug that some lives are beyond saving, it’s extremely out of place.

Some lurid experiments with shadow and color lend a few scenes some stylistic punch, but it’s not nearly enough to distract from Cravioto’s wrongheaded treatment of Eve and her quest. He makes matters worse for himself by liberally cross-cutting between Eve’s mission of mercy and camcorder footage of a fondly remembered day at the carnival with her boyfriend Ronnie (Kristoffer Kjornes). Anyone old enough to handle this movie has developed the critical faculties to recognize that the guy Eve keeps thinking about (and, more obviously, her captor repeatedly mentions) just might factor into the third-act development this film half-heartedly passes off as a twist. Even with the basic components of a rape-revenge thriller securely in place, everything feels out of whack.

Bound To Vengeance is not necessarily an evil film, or even a hateful one. It’s confused at best, though it’s more likely that the film’s misguided pseudo-feminist subtext is a result of simple thoughtlessness. But with all moralistic misfirings considered, Cravioto’s picture also suffers from another, more universal sort of ailment: No 80-minute film should feel this long.