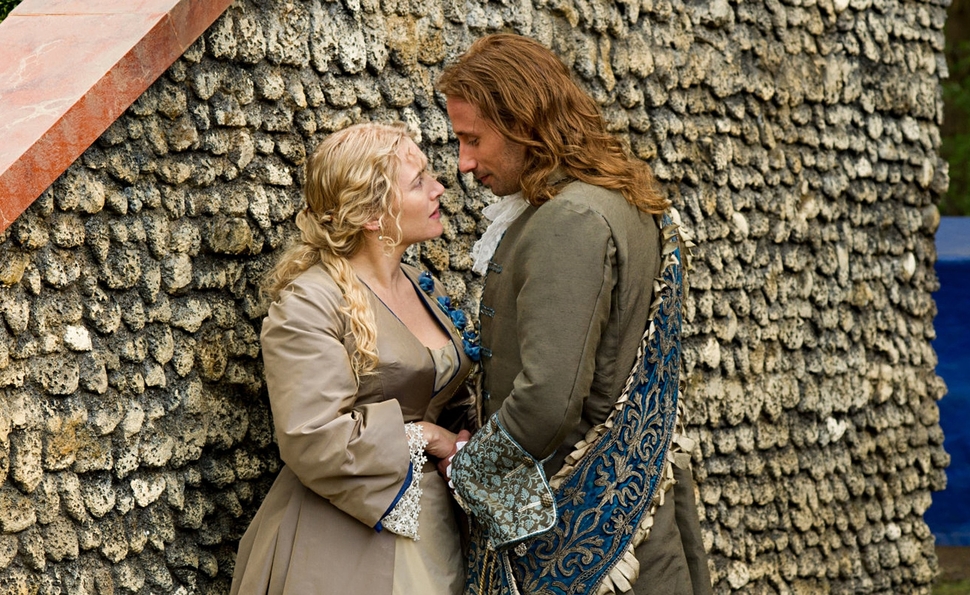 You could do almost anything in the gardens of Versailles during Louis XIV’s rule, including dance on a giant slab of marble situated in the middle of a meticulously constructed open-air garden resplendent with fresh grass seating, carefully transported seashells from Africa, and artfully hidden musicians. It was a different time—a gaudy time, really—but at least the parties were good. Director and co-writer Alan Rickman brings that world to life in A Little Chaos, an inventive but uneven look at life in Versailles during its gilded age, as told by an outsider who struggled not only to fit in, but to make the foreign environment still more beautiful in the process.

Rickman’s film is loosely based in reality—there is an outdoor ballroom at Versailles, Louis XIV (played by Rickman in the film) did order its creation, and there’s an abundance of shells everywhere. But he imagines it was crafted by the fictitious Sabine De Barra (Kate Winslet), a landscape architect who strove to bring her unique style (a chaotic one, naturally) to the gardens of Versailles while simultaneously grappling with her affection for the straight-laced André Le Notre (Matthias Schoenaerts), the mastermind of the royal gardens during Louis’ reign. That old story.

Sabine is an unlikely candidate for a Versailles gig: She’s a woman, she’s of a lower class, and she likes her flowers to sprawl. (Good heavens!) But when the king demands a rapid expansion to his gardens, André is forced to find fresh talent to expedite the process. The real blooming bush, however, is love, and the two are soon entangled in a forbidden affair that’s miles more complicated than Sabine’s plans to turn a pit-like portion of the estate into a waterfall-filled ballroom. The pair aren’t just separated by professional propriety, but by the class barrier, and Rickman’s film takes some unexpectedly delightful forays into the lives of various members of the court (including André’s hateful wife, played memorably by Helen McCrory), all the better to explain just how ill-suited the pair are for each other. It’s not just their differing ideas on landscape architecture that push them apart, oh no, it’s also politics and royal expectations. It’s very glamorous, and everyone drinks a lot of bad-looking wine. Most of the outfits look very uncomfortable, too.

Despite the film’s emphasis on the blossoming love between André and Sabine, their stations in life aren’t the real issue—it’s the lack of chemistry between Winslet and Schoenaerts. Before Rickman signed on as director, he was reportedly approached for the André role. While he shines in his supporting role as the satisfyingly complex king, it’s hard not to imagine what the film would have looked like with him as the romantic lead. Winslet and Schoenaerts simply never spark in a way that would indicate their characters appreciate each other on a merely professional level, much less as two people desperately in love with each other, yet forced apart. When Winslet and Rickman share the screen—as they do for two of the film’s best scenes—A Little Chaos crackles to life, and suddenly the film is funny, flinty, and more than a little daring.

Despite the apparent necessity of getting the garden ready for its splashy debut, A Little Chaos isn’t very urgent. It frequently abandons the gardening endeavors to check in on a tortured Sabine or sulky André. The inclusion of a subplot about Sabine’s dead husband and daughter—the latter of which literally haunts her—is unwelcome and bizarre, adding unnecessary texture to a role Winslet brings to life with ease. Still, there are charming surprises throughout the film, including a stirring score by Peter Gregson and a wonderfully rich third-act sequence that sees Sabine bonding with the ladies of the court in the most unexpected ways. There are weeds here, thorny stuff to slash through, but when A Little Chaos stays on course, there’s plenty of beautiful work to admire.