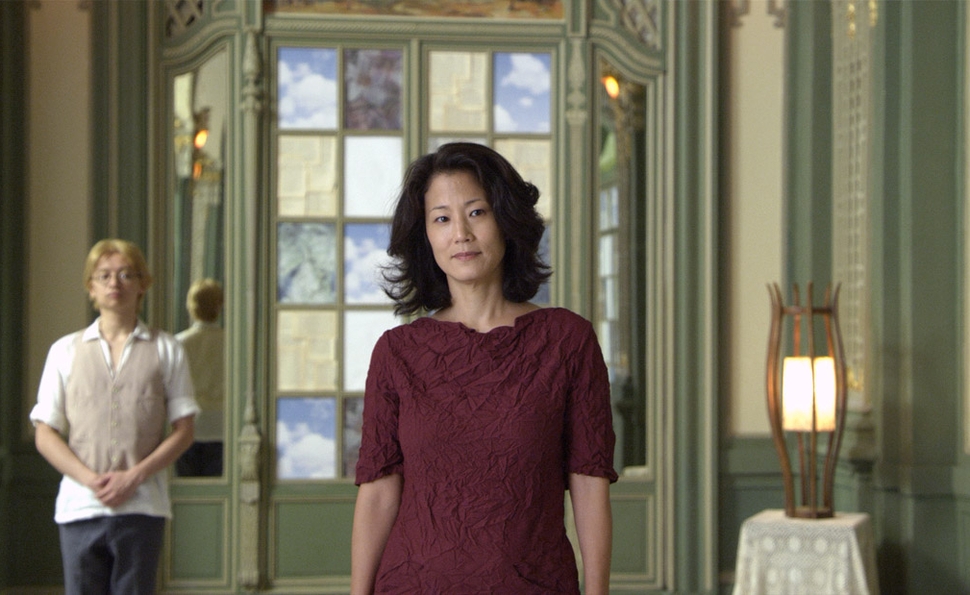 Set in an unnamed city at some indeterminate point in the future (the 21st century gets mentioned in the past tense), Jennifer Phang’s dystopian science-fiction drama Advantageous makes its priorities clear early on. About three minutes in, the sound of an explosion is heard, and three tween girls who’d been casually talking look up to see black smoke belching from a nearby building. “Not again,” one of them sighs. Whatever these attacks are, they recur throughout the movie… and yet none of the characters ever discusses them, and the end credits eventually roll without any explanation.

Advantageous boasts remarkably impressive visual-effects work for a low-budget indie production—there are phone conversations via hologram, flying vehicles, memories exported from the human brain through a tangle of plastic tubes implanted in the skull, etc. Still, it’s unlikely that the additional expense of terrorist strikes on a futuristic skyline was tossed in solely for vague world-building purposes. Rather, Phang and her co-screenwriter, Jacqueline Kim, clearly mean to underline their film’s more quietly disturbing issues by pointedly introducing, then all but ignoring, an overt ongoing campaign of aggression. “Yeah, that’s a problem,” this narrative strategy concedes, “but there are other serious problems worth considering.”

In this case, those problems specifically concern women. The world economy has taken a nosedive in this hypothetical future, and jobs are now so scarce that men have managed to reassert the occupational primacy they enjoyed two or more centuries earlier. Comparatively, Gwen Koh (Kim) is in good shape: She has a decent-paying gig as the primary spokeperson for the Center For Advanced Health And Living, a creepy organization that promises eternal youth for an extravagant price. Even so, Gwen is concerned about being able to pay the hefty tuition fees that would allow her daughter, Jules (Samantha Kim), to attend an elite private school, especially since the alternative in this rigidly stratified society appears to be a life of permanent squalor. When the Center’s sharklike director (Jennifer Ehle) decides Gwen is too old to serve as its public face, and Gwen finds she can’t even land an interview for another position, she opts to make a horrific sacrifice that will ensure Jules’ security, volunteering to undergo the Center’s most radical new rejuvenation procedure. Freya Adams subsequently plays “Gwen 2.0.”

That twist might make Advantageous sound like a feminist gloss on John Frankenheimer’s great Seconds, in which an aging man pays to be transformed into Rock Hudson. Certainly, Phang and Kim bemoan the way women are perceived to depreciate rapidly once they turn 40 or so, but they’re equally worried about what might happen to them should America’s increasing wealth gap turn ugly. (Arguably, minorities would have more cause for alarm in that situation than women in general, but Kim being Korean-American gives the film’s future a post-racial flavor.) The ideas are admirably heady, and Phang, making just her second feature (after 2008’s little-seen Half-Life), demonstrates a sure hand with both her imaginative milieu and her cast, which also includes James Urbaniak as another Center honcho, and Ken Jeong, in a rare non-comic role, as Jules’ father. If nothing else, Advantageous makes a superb showcase for Kim, a hugely underrated and underutilized talent. (Her brilliant performance as the manipulative title character in Charlotte Sometimes, made a decade ago, should have been a breakthrough.) Here, she projects such immense intelligence and empathy that it’s genuinely upsetting—as it’s surely intended to be—when she’s suddenly replaced by another, younger actor.

For all its ambition and evident virtues, however, Advantageous feels oddly skimpy, with a lot of dead air. Phang and Kim originally conceived and shot it several years ago as a 23-minute short film, which the curious can easily find online. This earlier version likewise stars Jacqueline Kim, Samantha Kim, James Urbaniak, and Freya Adams, in the same roles (indeed, it looks as if many scenes from the short were incorporated into the feature rather than being reshot, though some have been re-edited), and it gets across every key aspect of the movie mentioned above, with the exception of the unexplained bombings. While that’s a nice touch, it doesn’t justify the additional hour of padding. Neither does the fine work by Ehle and Jeong, who really could be eliminated without doing the narrative any harm. (Ehle and Urbaniak, in particular, are just good-cop/bad-cop versions of the same corporate worldview.) All the same, fans of smart, incisive, sociopolitical science fiction might want to see the feature-length version, if only to ensure Phang gets the opportunity to make more movies. Given the industry she’s trying to break into, it’s hardly surprising that she imagined a dystopia in which men are getting all the work and all the attention.