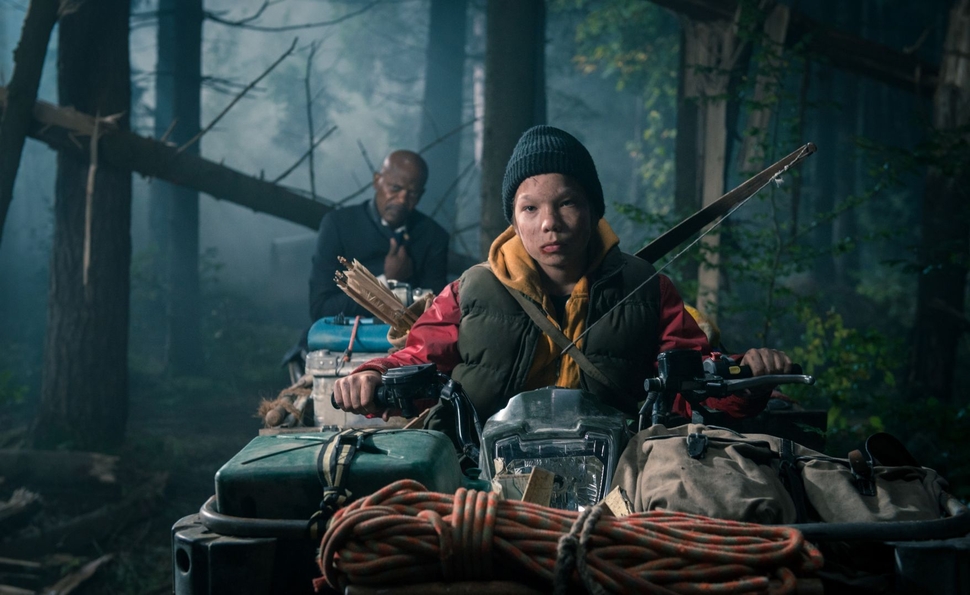 A filmmaker as savvy as Jalmari Helander could’ve played his new movie Big Game in many different ways. His previous film, Rare Exports: A Christmas Tale—about a band of reindeer hunters battling an evil Santa Claus—blends dark comedy, lighthearted local color, grim 1980s-style horror, and genuinely thrilling chases and fights. Helander has showed the flexibility to go retro, be silly, work broad, wink at the audience, or even deliver something straightforward and sincere. Big Game tries a little of everything, but ultimately settles into being a scrappy, lower-budget spin on the Big Dopey Action Movie genre. And as with nearly every stab at the BDAM, the audience’s satisfaction will depend largely on just how dopey they expect it to be.

Samuel L. Jackson stars in Big Game as President William Alan Moore, the embattled leader of the free world. At the start of the film, he’s dealing with declining popularity and disgruntlement from the hawks in his administration over his perceived wimpiness. (Any similarities between this president and a currently divisive non-fictional black American leader is… Well, let’s just say it isn’t unintentional.) When Air Force One gets attacked above Finland, the president bails out in his escape pod, and is found in the forest by Oskari (Onni Tommila), a 13-year-old who’s just been embarrassed by his father and exposed as incapable on his first hunting expedition with the men of his village. As a band of well-heeled terrorists close in on President Moore, Oskari draws on his familiarity with the surrounding wilderness and his need to prove himself, endeavoring to secure and transport the biggest game any hunter has ever nabbed.

Everything about Big Game is high-concept. This isn’t just “The Most Dangerous Game with the U.S. president as the prey,” it’s “Sam Jackson as the president in The Most Dangerous Game… plus a teenage underdog and a secret conspiracy that reaches up to the highest levels of government.” Helander pads out the action in the woods by cutting frequently to a cavernous Pentagon control bunker, where an impressive supporting cast—including Felicity Huffman, Victor Garber, Jim Broadbent, and Ted Levine—use spy satellites to track what’s going on, while debating an extraction plan. They quickly become proxies for the audience, watching what’s transpiring with dumbfounded expressions.

But maybe we should all be a little more dumbfounded? Given that Helander isn’t working with Hollywood blockbuster money, he can be forgiven for not filling Big Game from credits to credits with insane stunts and special effects. Yet for a movie with such a resourceful young hero, Big Game doesn’t have enough scenes like the one where the president and Oskari end up using a freezer as a raft in dangerous rapids. The film’s craziness level peaks with its premise. It’s admirable that Helander wants to make the kind of over-the-top action picture that was popular in the era of Con Air and Air Force One—rather than merely spoofing it, or “paying homage”—but the bulk of Big Game is too safe and square, with very few memorable setpieces, wild twists, or killer catchphrases.

So Big Game is a disappointment relative to its potential. That doesn’t, however, make it a bad movie… unless people go into it hoping for something terrible they can mock. (Those folks are going to be let down in an entirely different way.) If nothing else, Helander has properly schooled his actors on just what this film is, and they respond by playing their parts with infectious gusto. Everyone involved seems to be enjoying themselves, without tipping Big Game too far into campiness.

And as with Rare Exports, Helander does a lot with his location. The action isn’t taking place in some generic, hick-festooned “middle of nowhere.” Oskari’s cultural background matters, both to the story (where what he’s learned from his parents and ancestors helps him survive) and to the overall atmosphere (where the terrain and background characters give a familiar scenario a fresh look). There’s an aspirational quality to Big Game that compensates some for its shortcomings. Why can’t an undersized, not-that-strong Finnish bowhunter be the person who rescues the president? And why can’t a Big Dopey Action Movie get waylaid on its way to Hollywood and crash-land in Helander’s backyard?