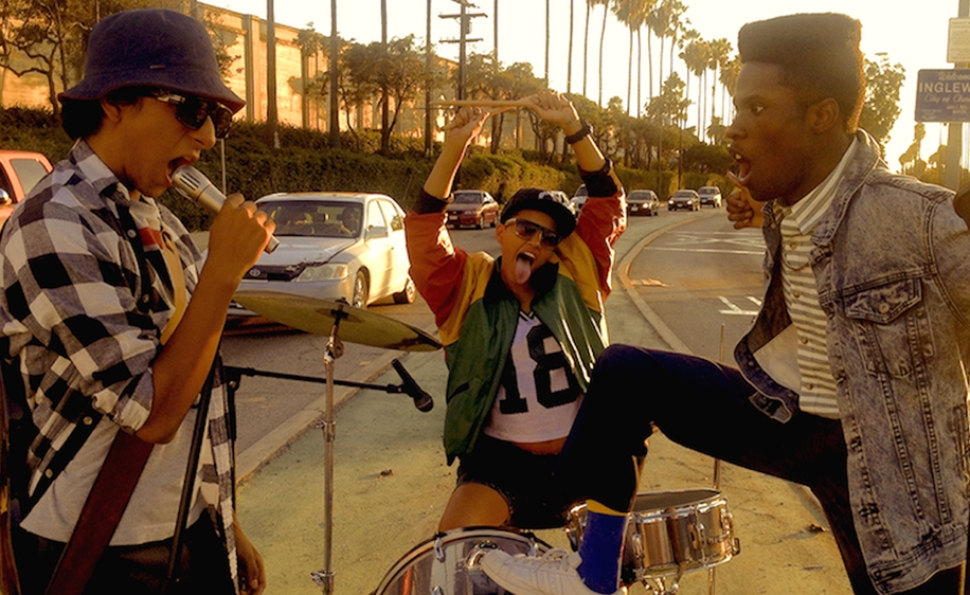 Dope, a comedy with an ever-present sense of danger, opens by showing how far out on the margins its central characters live. Not only are they residents of the struggling Los Angeles suburb of Inglewood, they live in a particularly dangerous section of Inglewood known none-too-fondly as The Bottoms. But even in The Bottoms, it’s possible to find a lower rung, which high-school senior Malcolm (Shameik Moore) and his friends Diggy (Kiersey Clemons) and Jib (Tony Revolori) do simply by being, in the terms of the film’s narrator (Forest Whitaker, also a producer), geeks. They like 1990s hip-hop—an era Malcolm places between the chronologically loose brackets of Public Enemy’s It Takes A Nation Of Millions To Hold Us Back and Jay-Z’s The Blueprint—and they dress the part. Malcolm sports a high-top fade that would give Big Daddy Kane pause, and the whole trio seems to take their fashion cues from reruns of A Different World and the VHS tapes of Yo! MTV Raps stacked in Malcolm’s bedroom. Their marginalization doesn’t end there. Diggy has no trouble resisting her church’s attempts to “pray the gay away,” and the whole group extends their interests to “white shit,” which encompasses everything from skateboards to manga to academic achievement to Donald Glover to Awreeoh (say it out loud), the punk band they’re trying to get off the ground.

Yet there’s a gulf between how they see themselves and how the rest of the world sees them, from the gang members who try to steal their bikes and press them into service to the colleges ready to dismiss applications with an Inglewood zip code. The strongest parts of Dope explore that gulf, and how easy it would be for Malcolm and his friends to get lost in it. In one early scene, Malcolm nervously bonds with Dom (A$AP Rocky, solid in his acting debut) over their shared love of vintage hip-hop, then even more nervously agrees to do him a favor. This turns out to be conveying a message to Dom’s on-off girlfriend Nakia (Zoë Kravitz), a slightly older woman Malcolm has been crushing on from a distance. But even that benign task is freighted with dread. It’s obvious that, whatever fondness Dom might be developing for Malcolm, he also views him as just another tool to use. It also becomes the eventual source of some dangerous consequences. Drawn to Dom’s birthday party by the promise Nakia will be there, Malcolm ends up in the middle of some violence when rivals attempt to jack a small fortune in MDMA. After fleeing the scene, Malcolm discovers the drugs have ended up in his backpack, and he’s soon receiving conflicting instructions about who he should deliver it to if he wants to stay alive.

Out of this, Dope spins a twisty odyssey that’s alternately scary, funny, and belabored. Some characters they meet along the way, like Jaleel (Quincy Brown), a rich kid with hood pretensions, prove memorable, but others, like Jaleel’s seductive sister Lily (model Chanel Iman), barely qualify as one-dimensional. Writer-director Rick Famuyiwa (The Wood) isn’t particularly fleet in handling the action, bringing in stylistic tricks like split-screen shots to no great effect, and losing momentum in a back half that gets bogged down in the online mechanics of dealing drugs in the 2010s. Even as the film brings in a flurry of macros, Snapchat images, and other Internet business, it plays like it’s running in place. Malcolm’s scenes with Nakia, on the other hand, actively slow it to a halt. Their tentative sort-of romance never resembles anything but an obligation.

Happily, what Dope does well, it does extremely well—namely letting Malcolm, Diggy, and Jib hang out together and navigate the world on their own terms. All three leads are charming, and together, they convey a real sense of camaraderie, the kind that only develop between misfits who find each other. Everyone’s happy to marginalize them, so they’ve built their own world within those margins. The best moments of the film have less to do with whether they’ll be able to unload the drugs and save their skins, and more to do with whether Justin Bieber is pretty enough for Diggy to find attractive in spite of her sexual orientation, or whether they’ll be able to explain to a white stoner pal (Blake Anderson of Workaholics) that no matter how much they like him, he can’t use the N-word to refer to them. Of the three, Moore is a particular standout, keeping his character grounded even when the film gives him speeches that overstate its themes about identity and expectations. He makes Malcolm real, and entirely his own person, though he’s surrounded on all sides by forces that demand he be someone else.