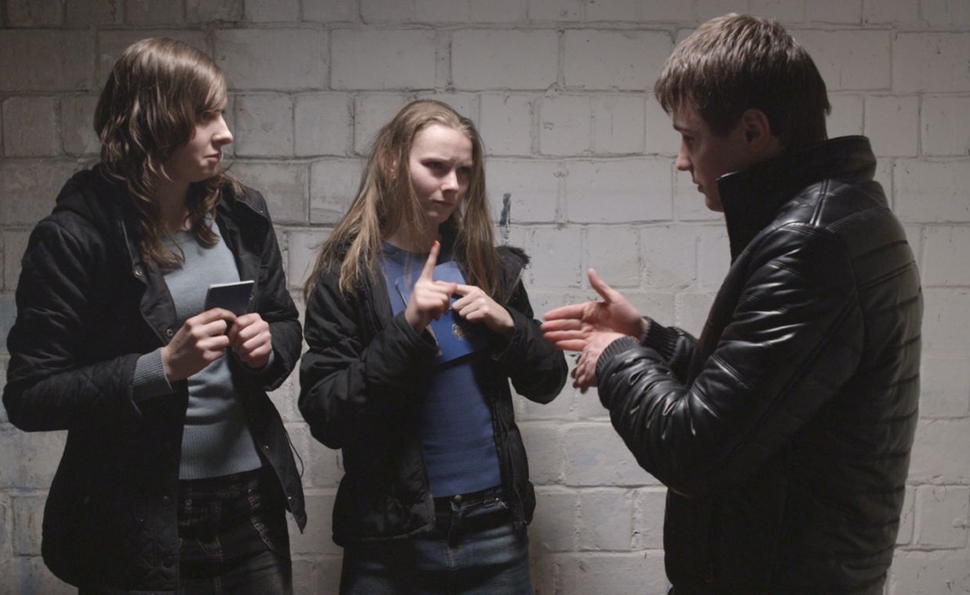 One of the things cinema lost when it transitioned from silence to sound is the necessity of conveying information primarily through action. Whatever turns of the plot couldn’t be suggested through pantomime found its way into intertitles, but some filmmakers took it as a challenge to lean on them as little as possible, most notably F.W. Murnau, whose 1924 masterpiece The Last Laugh is nearly all told visually. For a filmmaker to accept the same challenge nearly a century later, when audiences have little-to-no acclimation to silent cinema, is audacious in the extreme, and doubly so for a first-time director. But that’s what the Ukraine’s Myroslav Slaboshpytskiy has done with The Tribe, a corrosive and deeply unsettling look at a boarding school for the deaf that serves as locus of drug dealing, prostitution, and other forms of criminality. There isn’t a single word of dialogue in the film, just a flurry of untranslated sign language that requires the audience to interpret the events solely through action and gesture.

The Tribe is about a lot of things—the insularity of the deaf, the establishment and enforcement of conformist rituals, the struggle for power and self-determination—but it’s also a clarifying experience as a moviegoer. How much do we really need language to tell us what is essential? It takes a great deal of concentration to figure out what’s going on in The Tribe, because each scene needs an active viewer to unpack it. But anyone who’s spent time watching silent movies can attest that the extra attention encourages engagement over passivity, even though Slaboshpytskiy makes it difficult in other ways, whether by making a scene intentionally ambiguous or through revolting acts of violence. The codes of his criminal underworld are rigorously enforced, and its members’ inability to make themselves heard, inside or outside the group, has a suffocating effect.

Right away, Slaboshpytskiy elegantly establishes the disparity between the official school rituals and its seamier extracurricular ones. Sergey (Grigoriy Fesenko), a new student, walks into the school just as his classmates, teachers, and administrators are finishing up an assembly, but the first glimpse of him in a classroom setting is one of the film’s last. Through a combination of intimidation and hazing activities, Sergey is immediately swept up into a mob-like criminal operation, where he’s tasked with the low-level job of acting as pimp to two fellow students who offer themselves to lonely truckers. When Sergey takes a romantic interest in one of the girls, Anna (Yana Novikova), the consequences are severe, especially when they run up against the syndicate’s plan to ship the prostitutes off to Italy.

As its title suggests, The Tribe concerns a group of people removed, by handicap and by intent, from society at large, and Slaboshpytskiy’s decision to keep his characters away from the non-deaf turns the school into a noir-like shadow-world that’s never penetrated by outsiders. What happens within that world is immensely disturbing—one scene involving Anna will test the resolve of even the most jaded viewer—but it naturally follows the emphatic “speech” of characters who have to express themselves physically. It’s bracing (and perhaps for some, disheartening) to see a film about the deaf this uncompromisingly bleak, but if there’s anything worth extrapolating from The Tribe, it isn’t the deaf experience so much as recognizing our own tendencies to conform to certain unspoken laws. The more insular a society, the more severe the consequences of rebellion.

As a technical feat alone, “auspicious” doesn’t begin to describe what Slaboshpytskiy accomplishes here. He favors covering scenes in long master shots—sometimes in rigid compositions that amount to unblinking stares, others in roving tracking shots that capture an entire ecosystem in one take. Though some of the gesticulation is exaggerated, with signs flashing into what seems like fast-motion, Slaboshpytskiy isn’t always obvious about what information he’s trying to get across; the relationship between Sergey and Anna produces the only flickering evidence of tenderness in the film, but even there, a whiff of exploitation lingers. For the characters in The Tribe, who know nothing but hardship and narrow choices, love has a sour odor, too.