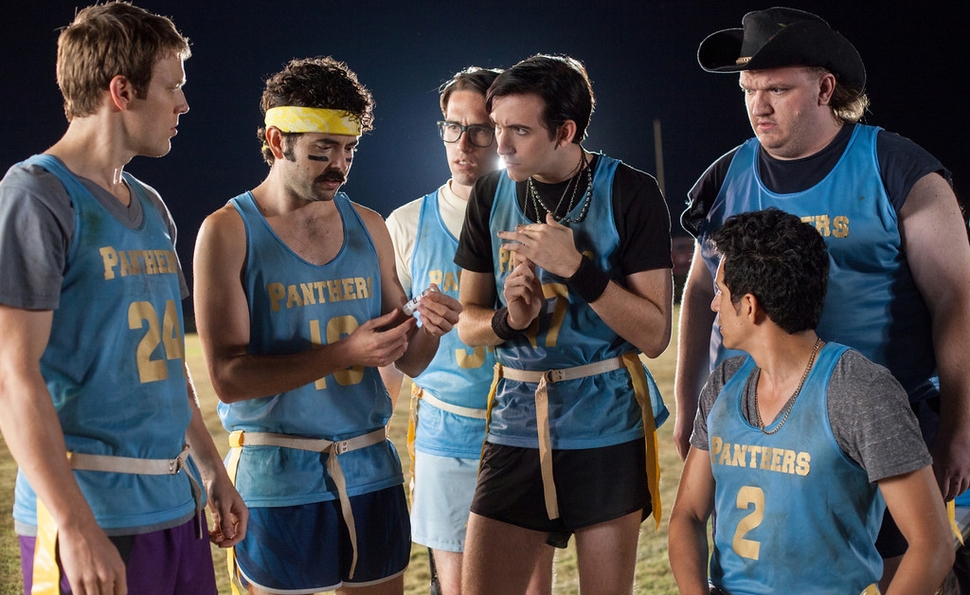 In one scene from Wet Hot American Summer, that gold standard of 21st-century genre spoofs, mild-mannered Coop delivers a rousing pep talk to his squad of rugrat softball players. He blazes through the familiar tropes of the sports genre, recalling the team’s transformation from a disorganized collection of misfits to a ragtag band of scrappy underdogs with a shot at the championship. He details the team’s strategy to fall behind, only to surge to victory at the last moment, using a kooky trick play. When he calls for the kids’ support, they aren’t feelin’ it. “It sounds like well-worn territory,” says one. “The whole thing feels kind of trite,” offers another. So they call it off.

Giddy with the same spirit of absurdist self-referentiality, Andrew Disney’s daffy new comedy Balls Out receives that scene’s lateral pass and runs with the ball. Directing a cast well-stocked with supremely talented young comics, Disney charges headfirst into affectionate parody of the sports genre and its attendant clichés. Better still, he scrubs his film free of smarm and superiority by extending the tired components of the sports flick past the point of satire into a realm of pure lunacy: For instance, the romantic lead needs a villainous, dislikable fiancée to stand between him and the true love interest. So Balls Out has Kate McKinnon snacking on glowing green paste and licking her betrothed’s entire face as a reconciliatory gesture.

Beginning with an epigram from Chumbawamba’s seminal “Tubthumping,” Balls Out introduces two intramural football teams destined to remain locked in combat through eternity: the lovable Panthers and the frat-boy Titans, both enrolled at an unspecified college. The Panthers’ captain is Caleb Fuller (Jake Lacy), a fifth-year senior feeling antsy about his impending graduation, entry into the world of law, and imminent nuptials to the certified nutcase played by McKinnon. Her fellow Saturday Night Live cast member Beck Bennett fills out the cast as the brazenly dickish captain of the Titans, Dick Downs. A host of weirdos make up the Panthers’ roster, including a requisite goth (Brian McElhaney), nerd (Will Elliott), and lunkhead (Sam Eidson). The stock players move through their assigned beats like wide receivers running a post, hitting the standard-issue training montage, crisis of self-doubt, and triumphant payoff in the climactic game. But Disney and his gifted cast rework these tropes through a demented comic sensibility, structuring a crucial man-to-man talk around Sisterhood Of The Traveling Pants jokes.

Disney and company freely follow their eclectic comic impulses wherever they might go, resulting in some hilariously bizarre setpieces. A testosterone-fueled pep talk from Dick increases in intensity until he’s holding a sacrificial calf aloft and gutturally howling. Some jokes may be more sophomoric than inspired—Nick Kocher’s poor Grant Rosenfalis (pronounced like “phallus”) suffers a debilitating in-game injury and spends the film paralyzed from the testicles downward—but the laugh-to-minute ratio shakes out to a respectable figure. Disney takes no shortage of pleasure in the fact that the actors supposedly playing college seniors all look like they’ve had multiple conversations involving the word “mortgage.” The purest embodiment of the film’s affably batty mindset comes in the form of two announcers played indelibly by D.C. Pierson and Jay Pharoah. As the film’s covert stars, they sit back and riff on the games with easy chemistry and deliriously funny one-liners. After the Panthers sacrifice a key possession: “Call the Panthers Houdini’s shittier brother, because they definitely do not have the magic!” In response to a fourth-quarter barn-burner: “I can’t remember ever seeing a game like this, but then, I can’t remember anything—I have the disease from Memento!”

Balls Out has its fair share of problems, some of them considerable. Lacy made for an off-brand Jim Halpert during The Office’s weakest seasons, and though he was agreeably sweet in last summer’s Obvious Child, he’s a vacuum of personality here. Something about his nondescript face seems almost scientifically engineered for maximum inoffensiveness. The flaccid sincerity of his courtship with Dick’s twin sister (Nikki Reed) has no place in such a resolutely parodic film, and it comes off feeling shoehorned-in. (Though it does provide the film with an impromptu detour to a defunct skating rink inhabited by violent vagabonds.)

The fat, easy pun of the title and atrocious poster design may sadly lead inquisitive parties to believe Balls Out is another in-and-out cash grab for idle teens, but there’s something stranger and more valuable going on under the logline. In turns, it functions like a well-curated sketch showcase, where underappreciated comedians get the chance to flex their muscles on the silver screen. But the film’s greatest virtue is Disney’s ability to poke fun at sports-flick tropes while simultaneously embracing them. No cliché goes untackled; Disney and his first-stringers leave it all on the field.