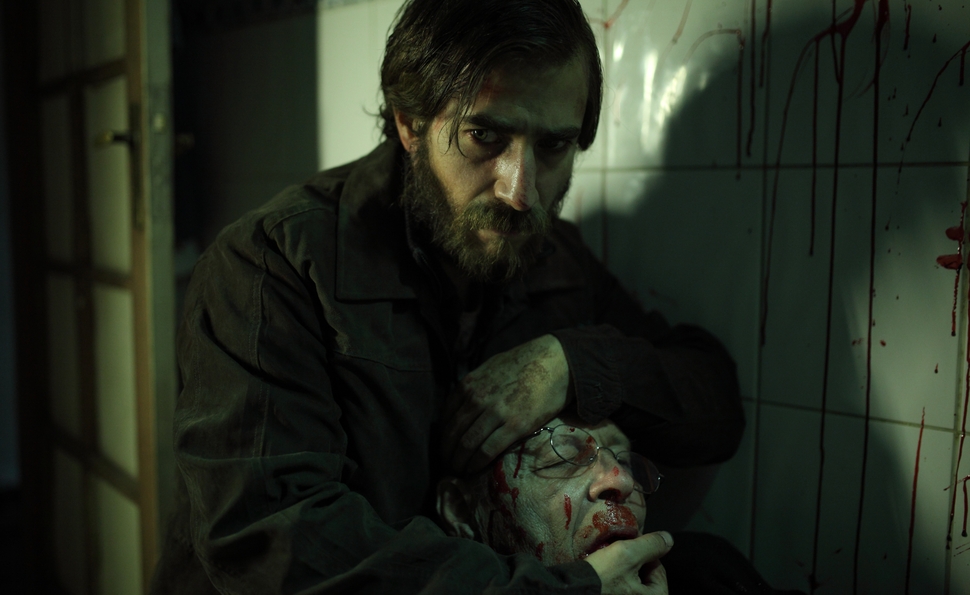 Whatever you do, don’t call them vampires. Or zombies. Or any other name for a human who is turned into vampire- or zombie-like creature and condemned to walk the earth in perpetual hunger for the flesh of the living. For a certain breed of self-serious genre picture, such labels would seem too gauche, like calling a wagyu beef patty topped with lobster, caviar, venison, a duck egg, and an edible gold leaf a hamburger. But while a more sober approach to a heavily mined subgenre can be refreshing—Unbreakable or Let The Right One In spring immediately to mind—they can also be enervating and traffic in a new set of clichés along with the ones they’re consciously exploding. A couple of months ago, the zombie-esque apocalypse drama Maggie collapsed under its own weight, despite some nice atmospheric touches and an unexpectedly muted performance by Arnold Schwarzenegger. And now the same thing has happened again with Guillermo Amoedo’s The Stranger, a vampire-esque horror drama that luxuriates in bad vibes—and occasionally fountains of blood.

Putting the slooooooooow in slow-burn, Amoedo opens with a disquieting set-up, but has trouble with the follow-through. The stranger in The Stranger is Martin (Cristóbal Tapia Montt), a bearded drifter-type who arrives in a quiet town in the Canadian northwest, searching for his wife Ana (Lorenza Izzo). Though initially cagey about it, Amoedo doesn’t hide Martin’s motives for long: He wants to kill his wife, with whom he shares an infectious disease that makes them thirst for human blood. When he finds out she’s already dead, Martin then plans to kill himself, and he gets a head start when Caleb (Ariel Levy), the punk son of a corrupt police lieutenant (Luis Gnecco), sticks him with a blade instead. But when Peter (Nicolás Durán), a young boy with his own secrets, witnesses the murder, he and his mother (Alessandra Guerzoni) takes steps to bring Martin back from near-death, which has terrible consequences for all involved.

Amoedo, a Chilean director who has collaborated on Eli Roth’s last few screenplays (Roth, returning the favor, emblazons his name on the “Presents” credit for this one), has chosen a gorgeous setting for The Stranger—a remote and beautiful mountain town, nestled against the sea. And there’s some initial intrigue about Martin’s motives and behavior, which is both extremely aggressive regarding his search for his wife and extremely passive about his own mortality. But once Amoedo lays all the cards out on the table, The Stranger feels like a piece of genre revisionism only in its deliberate, grinding pace, not in any refreshing turns of the plot. Treating vampirism as an infectious, hereditary disease may get it some distance from old-fashioned mythology, but if the threat is more or less the same, then it doesn’t transcend the genre at all. Based on the evidence here, Amoedo is a thoughtful, talented, self-aware filmmaker, with a sensibility that deviates sharply from Roth’s. But when the one distinguishing factor of your movie is its somnolence, it needs something more.