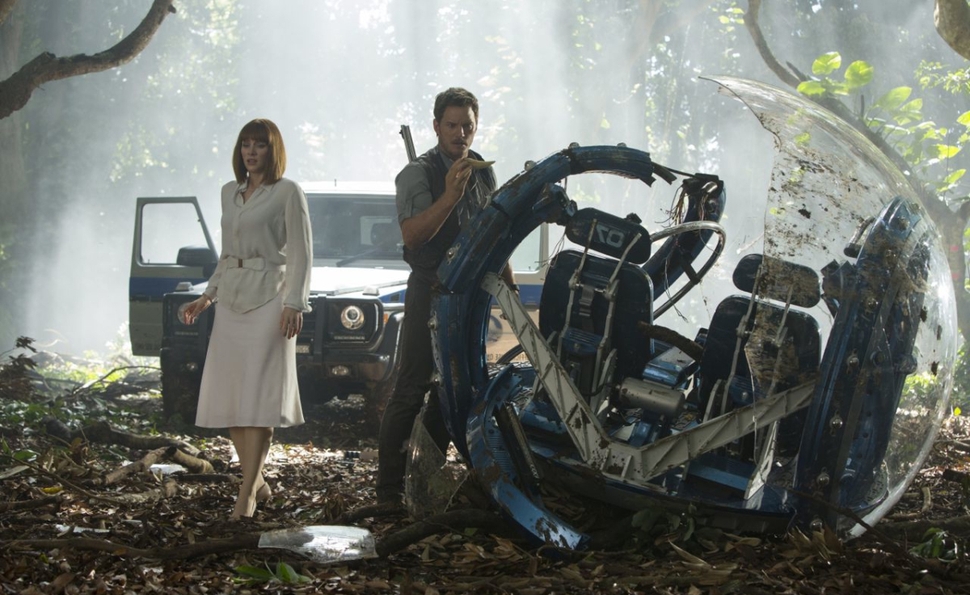 There hasn’t been a Jurassic Park movie since Jurassic Park III in 2001, perhaps in part because nothing in that movie seemed to suggest anyone needed to take a return trip to the island where dinosaurs once again roamed the earth. Where the first Jurassic Park combined a lot of thought-provoking scientific concepts from Michael Crichton’s novel with groundbreaking special effects and director Steven Spielberg’s unmatched gifts for awe and suspense, both Spielberg’s The Lost World: Jurassic Park and the Joe Johnston-directed third installment played like entertaining retreads. More dinosaurs, more family-friendly thrills, more last-second escapes, but also less of what made the first film so compelling. Rumors of a fourth film surfaced over the years as Spielberg talked about having a brilliant concept for keeping the series going and filmmakers drifted in and out of the project. But the film itself seemed frozen. How, after all, do you wow an audience that’s already seen snarling velociraptors twice?

Taming them seems like an odd answer, but it’s the one offered up by Jurassic World. The long-in-the-works sequel casts Chris Pratt as Owen, an ex-military animal expert who’s tentatively established himself as the alpha dinosaur of a pack of velociraptors he’s raised since their birth on the grounds of Jurassic World, the thriving theme park that’s risen from the ashes of the now-decades-ago disaster of the first film. (Perhaps those involved consulted the Delos corporation, which reopened for business after the theme-park massacre of Westworld in another Crichton-inspired sequel, Futureworld.) But despite the park’s bustling crowds, those behind Jurassic World fear for its future unless it can keeping finding novel twists on its core come-see-dinosaurs mission. “No one’s impressed by a dinosaur anymore,” Claire (Bryce Dallas Howard), the park’s operations manager, tells Owen, and short of having a stegosaurus wink at the camera, Jurassic World couldn’t come any closer to breaking the fourth wall.

The park’s solution, and the film’s, is to introduce a hybrid dubbed Indominus Rex, a genetically engineered gargantua that’s a mix of tyrannosaurus rex and little bit of this and a little bit of that, all fused together in the hope that the combination will produce a whole more powerful than the sum of its parts. In that it’s a bit like the movie. Directed by Colin Trevorrow and co-written by Trevorrow and his writing partner Derek Connolly—working from a script originated by Planet Of The Apes rebooters Rick Jaffa and Amanda Silver—Jurassic World mixes many elements from the first film while shifting the mood from horror and suspense to action, not unlike what Aliens did by reworking the raw material of Alien. (In some stretches, references to Aliens even threaten to muscle out the many, many callbacks to the original Jurassic Park.)

When it keeps moving, it works wonderfully. Trevorrow shows a gift for crafting setpieces and staging action scenes never suggested by his feature debut, the slight science-fiction-themed comedy Safety Not Guaranteed. It’s the best imitation of Spielberg since Gareth Edwards’ Godzilla last year (which was itself the best in a long while). It’s when the movie stops and opens its mouth that things get stupid. A single woman who’s chosen to focus on her career (Boo!), can’t remember the ages of her visiting nephews Zach (Nick Robinson) and Gray (Ty Simpkins) (Hiss!), and confesses she may not even want kids of her own (the horror!), Claire’s less a character than a cliché that Howard struggles to bring to life. The film dies each time the film pauses to let her banter with Owen. A sub-plot with Vincent D’Onofrio as a military contractor who sees great potential in weaponizing dinosaurs and sending them into battle is a different kind of ludicrous. Only Jake Johnson and Lauren Lapkus, as control-room employees, bring much wit to the movie.

Much better: Any time the movie let the dinosaurs cut loose, be it in a tense scene in which the Indominus Rex (I-Rex?) menaces Claire’s nephews while they’re trapped in a gyroscope, or a chaotic stretch that finds the park terrorized by flying lizards, or a finale that only needs ineffective Japanese soldiers to be a kaiju battle. The effects haven’t really improved that much since Jurassic Park—in fact, in some scenes they’re less impressive than those of that 1993 film—but everyone involved has clearly had fun dreaming of new ways for dinosaurs to terrify humans. And for all Jurassic World’s attempts to go bigger, that’s essentially the best those first sequels could manage, too. It’s fun, but it’s ultimately more of the same in brand-new packaging.