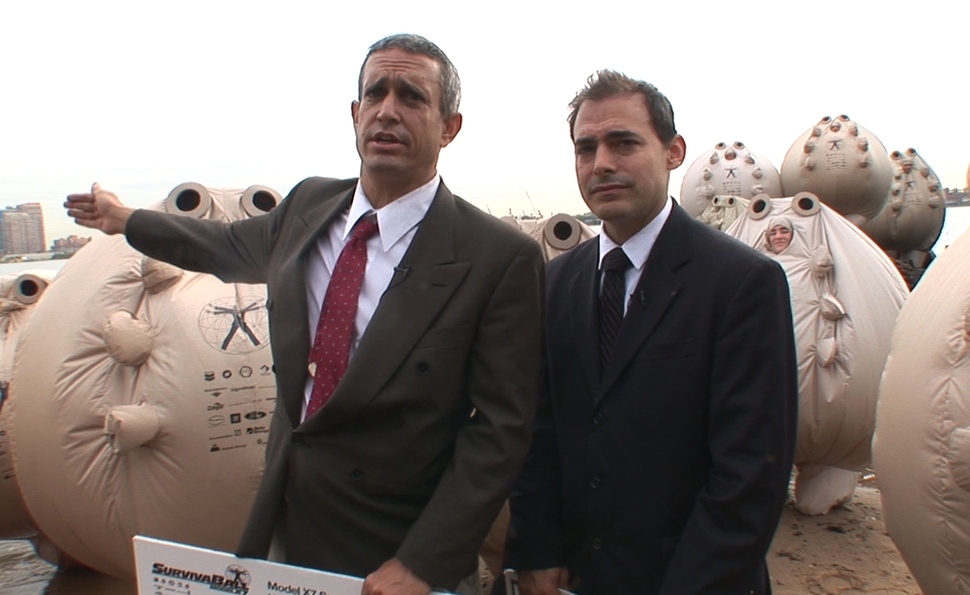 The Yes Men Are Revolting

In activist circles, the Yes Men are legendary. For more than a decade, the prankster duo who go under the aliases Andy Bichlbaum and Mike Bonanno have pulled off a series of stunts posing as spokesmen for corporations and the U.S. government. More often than not, they snooker important people and the media into believing outrageous things—for example, that Halliburton is marketing a white, bulbous “Survivaball” to help its customers survive the growing effects of climate change. Though they rarely provoke more social change than a disgruntled PR rep, or a brief dip in stock prices if they’re lucky, the Yes Men have nevertheless proven resilient with the art of the Socially Progressive Punk.

The Yes Men Are Revolting (all together now: “You said it—they stink on ice!”) is the third film about the troupe, and the second one that Bichlbaum and Bonanno have co-directed themselves. Their previous effort, 2009’s The Yes Men Fix The World, had big, lofty pranks: In addition to that Survivaball bit, they posed as Exxon spokesmen to market candles supposedly made from human flesh. The film was also cloaked in artifice and irreverence, in a way that bordered on obnoxious. In between the greatest-hits reels of their exploits, the men were shown retreating to a “secret underground lair” where they went swimming in their business suits.

But there’s no time for joking around when the world has gone to hell. So the new film has a more grounded sensibility, or perhaps it would be more accurate to say that this time the artifice resembles real human emotion. Revolting is also co-directed by Laura Nix (The Light In Her Eyes), who helps construct a narrative around the men’s (apparently) sincere efforts to leave the world in better shape for the next generation. Bonanno has two children with a third on the way, and less energy to devote to pranks, which Bichlbaum resents. The duo start to express doubt over the point of all their efforts, which seem to vanish into Wikipedia lore soon after their elaborate stagings. So instead of pranking, Bichlbaum and Bonanno divide most of the film between meeting activists they’ve inspired in Uganda and elsewhere, wandering through the Occupy Wall Street protests with awe, and using little cartoons to express concern about climate change.

Considering the amount of padding on display over the course of 90 minutes, it’s hard to tell why a third Yes Men film needed to be made at all, other than to burnish its stars’ reputations. Revolting plays with interesting ideas about how different generations of activists inspire and feed off of one another, but that theme plays out as blindly congratulatory. The Yes Men and their ilk come off well when all they have to do is pat each other on the back. Meanwhile, new developments flaunt the idea that they could have ever changed anything. The Supreme Court’s Citizens United decision, which granted huge amounts of power to the very corporations the Yes Men are trying to influence, came down since the last film, yet it goes unmentioned here. The Yes Men are taking a victory lap when victory is nowhere in sight.

It’s telling that the movie dwells on a 2009 bit where its subjects impersonated the U.S. Chamber of Commerce (and announced millions of dollars to fight climate change at a phony press conference that was dramatically crashed by the real Chamber of Commerce). Reaching back to the year their last film came out for a worthwhile stunt to showcase is as sure a sign as any that the Yes Men have been slowing down. Elsewhere, they lead public-square demonstrations, including a tired-looking Survivaball retread that opens the film. In both concept and execution, these lack the ingenious calling cards of the group’s best efforts. Leave the bullhorns and placards to the amateurs, guys.

When the Yes Men do come up for air, the results can still be invigorating. In Revolting’s climax, the guys crash a national security conference with Native American activists to announce a new Department Of Energy “plan” to convert America’s power grid to solar. One of their agents beats a drum and gets the room full of weapons professionals to link arms and sing a bogus indigenous chant. Afterwards, a Northrop Grumman representative tells Bichlbaum his company would love to invest in the initiative. It’s exactly the kind of revelatory moment that’s unique to the Yes Men, and if there’s ever a fourth film, this is the kind of stunt it needs to focus on.