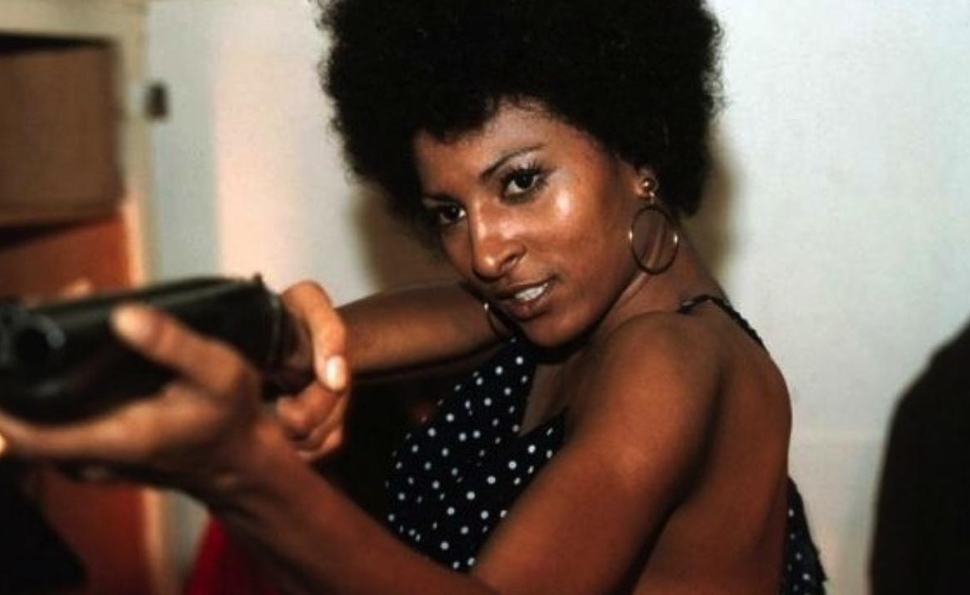 In the 1970s, not many actresses had the presence of Pam Grier. For someone so tall and statuesque, it was remarkable that Grier avoided being typecast as mere bombshells, or as physically imposing villains. She could play rough, and she could be mean, but Grier in her heyday also had an endearing exuberance about her, and a softness. When she flirted with the men in her films—giving her little half-smile—she looked genuinely enthusiastic about where the night might be going. And whenever her characters were captured by the bad guys and knocked around, no one in the audience wondered when a man would show up to save her. Grier’s characters kept their wits, and had enough strength to slug their way out of a trap.

By the time Grier appeared in Friday Foster in 1975, she’d become one of the most popular movie stars in the country, while working almost exclusively outside the major studios. In just four years, Grier had risen from supporting parts in women’s prison pictures to being a top-billed action hero. Friday Foster was the last film she made for American International Pictures, and in some ways is the apotheosis of the entire early 1970s “blaxploitation” genre. In the first Shaft/Superfly blaxploitation wave, the movies focused on outlaws and outsiders, defying the white establishment. Friday Foster, though, is about the black establishment, set in a milieu of African-American millionaires, fashion-designers, spiritual gurus, and congressmen—all targeted by a mysterious assassin, investigated by Grier’s intrepid photojournalist. For once she’s not the abused, underestimated scrapper out for revenge. Grier’s Friday is as stylish as she is capable.

Friday was a level-jump of sorts from Grier’s most famous role, Foxy Brown, the lethal crusader she played in the 1974 thriller of the same name. In Foxy Brown, the heroine’s boyfriend is exposed as an undercover government agent, and when the mob shoots him, Foxy gets a job at the syndicate’s most exclusive escort agency to take them down from the inside. The story takes a while to get ramped up, and the pacing’s a little slack, but there’s a good reason why Foxy Brown is generally (if wrongly) considered the 1970s Pam Grier film. Writer-director Jack Hill’s success as a drive-in movie-maker was largely due to how well he could work sex and violence into pictures without it coming across as overly sleazy. It’s not irrelevant to the popularity of Foxy Brown that Foxy dresses up as an expensive prostitute, seduces no-good louses, and then abuses and/or shoots them. But as handled by Hill, the sensationalistic elements seem both natural and marginal. Grier as Foxy would be fun to watch even if she kept her clothes on and her claws in.

If Foxy Brown falls just short of being peak Grier, though, it’s only because it’s a weaker version of Hill’s Coffy, from the year before. Hill originally planned Foxy Brown as a sequel to Coffy, before AIP changed its mind and asked him to create an entirely new character. The follow-up’s story, however, didn’t change much. Coffy, too, is about a woman fed up with the drug lords’ stranglehold on her neighborhood. A nurse by day, Coffy spends her nights looking to pay back the people who turned her sister into a comatose junkie. Her standard method? Convincing crooks that she’s a desperate dope-fiend herself, and then turning the tables on them when they try to take advantage of her.

Both Foxy Brown and Coffy share some of Hill’s sensibility: the punchy dialogue that sounds like it was written for the trailer (“You tell me who you want done, and I’ll do the hell out of him!”); the from-left-field sequences of pure titillation (a brawl in a lesbian bar in Foxy Brown, a clothes-ripping hooker-fight in Coffy); and a harsh spin on self-determinism, arguing that citizens have both the right and the responsibility to purge their communities of predators, whether the cops like it or not. But Foxy Brown has more of a glamorous feel, starting with the James Bond-like opening credits—with Grier dancing in silhouette—and continuing through the fancy outfits Foxy wears when she’s posing as a call girl. Coffy is a little rawer in the way it goes about its business. The violence is more graphic, and Coffy herself is haunted by everything she’s seen and done since she started fighting the dealers. While Hill keeps the film in the realm of pulp fantasy, the stakes are higher.

In that way, Coffy is the opposite of Friday Foster. The former’s a sobering story kept at street level, while the latter’s more light-hearted, even though it’s about a nationwide conspiracy to kill all of America’s black leaders. Producer-director Arthur Marks (who also co-wrote the movie with Orville H. Hampton, adapting a short-lived newspaper comic strip) frames Friday Foster as a rip-roaring adventure, so sunny that it could’ve easily been rated PG if not for the occasional Grier nude scene. The character’s not as iconic as Foxy Brown, and yet Friday is Grier’s best role from this era, because it gives her the most notes to play.

No longer stuck with the usual motley assortment of criminals and victims, Grier as Friday is surrounded by a who’s-who of black actors, cast as some of America’s most powerful tastemakers and government officials. Plus, she anchors chase scenes that stretch from the manicured streets of Washington, D.C. to the rooftops of Los Angeles. Friday Foster isn’t a great film, but, like Coffy, it’s a lively one, and a fantastic showcase for its star. If the pop culture of the 1970s had been different—if it’d been more like the world depicted in Friday Foster, perhaps—then Grier might’ve made a half-dozen more Friday Fosters, and a few more Foxy Browns. Instead, she faded into the background once Hollywood decided that blaxploitation had run its course. In the years that followed, the movies proceeded awkwardly around a Grier-sized hole.

Olive’s new Blu-ray editions of these three films look nice but lack special features—which is a shame, given that previous DVDs contained interviews and commentary tracks that could’ve been carried over.