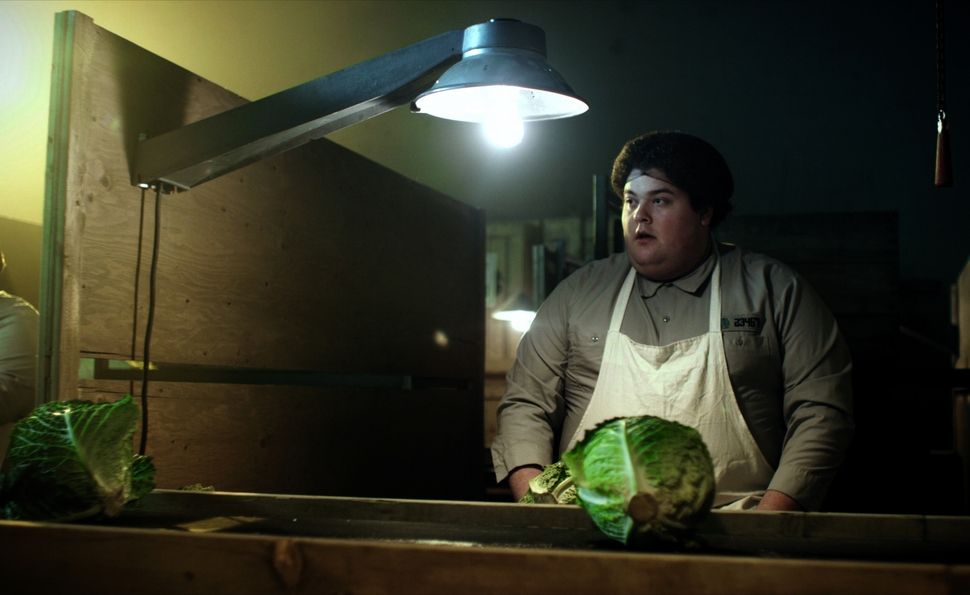 Gather ’round, little ones, listen close, and we’ll all learn where Cabbage Patch Kids come from. The iconic children’s toys begin as little malformed fetuses, suspended in amniotic fluid contained within an actual head of cabbage grown inside of an immense harvesting plant. Factory workers pick these cabbages in exchange for a pittance from a tight-fisted, pitiless foreman. They then hand their cargo off to a second line of factory workers, who perform a vegetal C-section and forcibly remove the fetuses from the viscous, milky fluid within the cabbages. From there, a violent process involving steampunk machinery and unnamed chemicals transforms these hacking lumps of flesh into cutesy plastic dolls, which are then packaged and shipped so they can be sold to grateful children around the world.

Pivoting off a traditional Russian fable, this deranged bedtime story forms the basis of Patch Town. The jumping-off point invites camp, and writer-director Craig Goodwill hasn’t compromised one grain of kooky-creepy personality while extending his 2011 short to feature length. He treats the added runtime like a bigger playpen, providing him with more space to stack the post-industrial blocks that make up his richly realized dystopia. The first-time feature director still has some growing up to do—the glaring genuflections to his influences betray his rookie status—but Patch Town has just enough laughs, imagination, and sincerity to follow through on its naked bids for cult adoration.

Goodwill earns his first round of kudos for his keen eye during casting sessions; he’s assembled the most distinctly odd-looking collection of actors this side of the Dreamlanders to populate his ghetto of misfit toys. With his doughy paunch and King Buzzo mop of brown curls, Rob Ramsay cuts a less-than-heroic figure. As protagonist Jon, however, an indefatigable cheeriness is the only armor Ramsay needs. What the kids don’t know is that after they toss their Cabbage Patch Kids, they revert to their human forms and staff the sweatshops that crank out more dolls. One such Cabbage Patch Adult, Jon trudges through his dreary day-to-day by plotting his journey to reunite with his “mother” (the girl who cherished him in her childhood, played as an adult by Zoie Palmer). His flight from the hawklike gaze of the Childcatcher (Julian Richings, the heir apparent to Peter Cushing’s throne of gauntness) into the human world acquaints him with a fellow former Cabbage (scene-stealer Suresh John), who gets him work as a department-store Santa. Jon’s quest ultimately boils down to two steps: 1) locate his “mother” and 2) convince her that the man purporting to be a child’s plaything in a past life is not a crazy person. That second part gives Jon considerably more trouble than the first.

Patch Town’s frequently lands pretty far to the left of the dial, and anybody unable to get on its weirdo wavelength may grow fatigued by the film’s many flights of fancy. Patch Town’s sprightly, playfully absurd sense of humor has plenty of crossover appeal—in one scene, a kidnapper slips on a fresh glove and contentedly sighs, “Oooh, yeah, now that’s a good kidnapping glove” like a lumberjack taking his first sip of coffee. But not everyone will get on board with sporadic bursts of rhyming dialogue, or impromptu musical numbers (especially when none of them succeed in producing a single memorable ditty). Ironically enough, the film’s additional flourishes of whimsy keep it grounded, preventing the production design’s pervasive darkness from overtaking the peppy, childlike spirit at the core. Like the archetype of the villain who only wants to be loved, such flippancies work more as signifiers, reinforcing the unhinged notion that Patch Town is for the children.

The charms of Goodwill’s film only diminish when he becomes over-reliant on his numerous and clearly espoused influences. You could fairly peg Patch Town as a twisted riff on everything from Repo! The Genetic Opera to the works of Terry Gilliam to Toy Story 3 to Elf to the smart-alecky bustle of Jean-Pierre Jeunet. Goodwill’s got the overeager, everything-at-once attitude of a freshman director who’s been saving up a lifetime of ideas. But his efforts to recapitulate the numerous works that have inspired him sometimes slip from affectionate homage to wholesale mimicry. From the high marble pedestal on which Goodwill’s placed it, Brazil casts a long shadow. Now it’s on him to get out from under it.

Even in his first go, Goodwill demonstrates that he’s already got a handle on one of the things that a filmmaker can’t be taught. For all its deliberately cultish affectations, Patch Town wins audiences over on the merits of its big, sloppy, generous heart. Radical optimism powers Jon’s hijink-fraught trip through the human world, and Goodwill subscribes to the equally radical belief that all of his characters are deserving of love. Patch Town convincingly emulates the tone of a 10-year-old filling a younger sibling’s head with fairytales just for the fun of it, knowing that children will (or rather, can) believe anything. In the universe of Goodwill’s just-so story, that willingness to entertain the fantastical renders playthings like the Cabbage Patch Kid irrelevant. To him, no toy could ever be more fun than an overactive imagination.