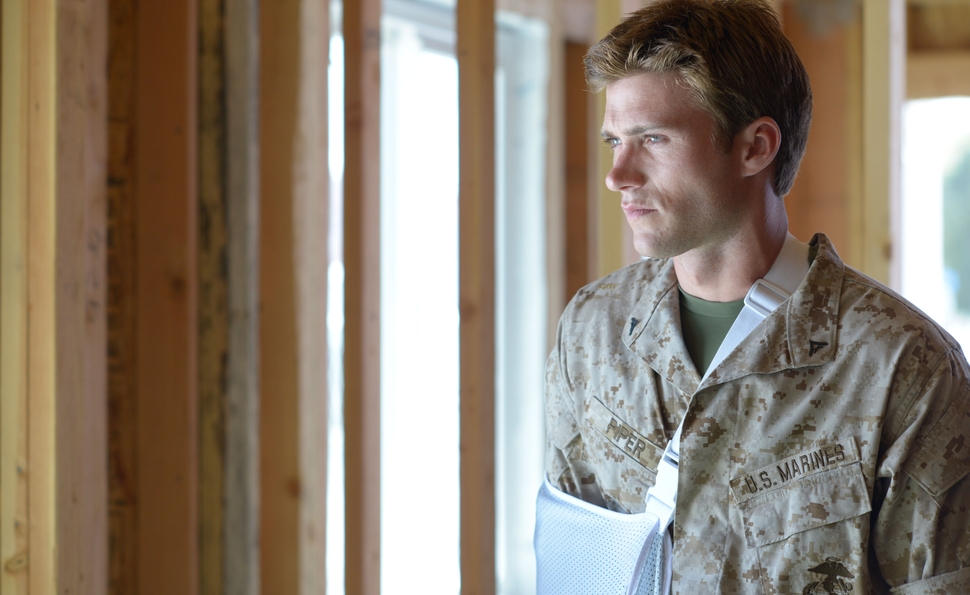 The strangest thing about the dour indie revenge drama Dawn Patrol is its pedigree: Some years ago, its director, Daniel Petrie, Jr., wrote a little cult movie called Beverly Hills Cop, which apparently managed to find an audience. He followed up that success with the sexy TV thriller The Big Easy and the canine comedy Turner & Hooch before making his directing debut with Toy Soldiers, one of the first of the Die Hard knockoffs that flourished throughout the 1990s. This one was set in a boys’ boarding school: Dead Hard Poets Society, Petrie should’ve called it.

Dawn Patrol, a would-be stern meditation on The Awful Price Of Vengeance, hasn’t a molecule in common with any of those glossy commercial pictures. It’s more or less a remake of Todd Field’s equally sullen In The Bedroom, relocated from coastal Maine to the part of Southern California that extends northwest along the shoreline from Malibu. Scott Eastwood—who began his career using his mother’s last name, but whose resemblance to his living-legend pop Clint is so uncanny, there’s no hiding it—plays John Piper, brother of professional surfer Ben. Ben’s surf-contest winnings seem to support their expired-pothead parents, played by Rita Wilson and Jeff Fahey, whose movie-star looks are roughed up enough to suggest decades of sunburn and hard living.

Ben is a spoiled, cruel little shit, especially when it comes to women: Spotting his ex-girlfriend Donna (Kim Matula) with a date, he flies into a rage and picks a fight with the guy. John is smarter, calmer, and more decent than his brother, but backs him up in the melee anyway, out of loyalty. When things spiral out of control and Ben is killed, that same misguided loyalty makes John susceptible to the whims of his grieving parents, who aren’t any more reasonable than his brother was. “You’ve got a grave to cry on,” John’s father tells him. “Don’t you want one to spit on?” Sometimes the best way to Honor Thy Mother And Father is to ignore their terrible suggestions.

There’s a certain undeniable gravity to John’s tragic arc. But Dawn Patrol feels distended and awkwardly paced despite a lean, 87-minute runtime. Its framing sequence, wherein John, dressed in a military uniform, is held at gunpoint by a mysterious woman, feels like a desperate ploy to impart the wobbly, pop-song-scored first act with a sense of urgency. On the plus side, Eastwood, Wilson, and Fahey are all strong and convincing, and the location photography in Ventura and Oxnard, California conveys a palpable sense of place; this seaside town is tiny enough that everyone at least recognizes everyone else, even if they don’t know them. Racism is part of it: John casually explains to Donna’s Mexican-American companion that he belongs farther inland, because the beach is “ours.” It’s not pretty, but it feels authentic.

That’s all to the good. What isn’t so good is the film’s treatment of Matula, who gets two sex scenes, at least one of which is brazenly exploitative. At least she isn’t the woman saddled with dialogue like, “Do you think my revenge can wait that long? I think my revenge can wait forever!” By the time those words are spoken, it’s tempting to say, “Naw, please hurry it up.”