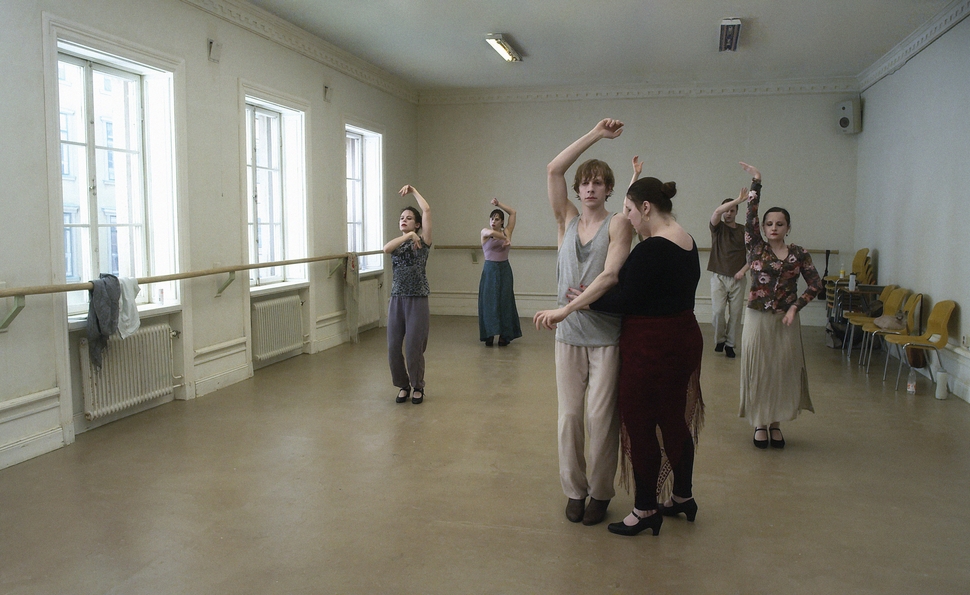 A Pigeon Sat On A Branch Reflecting On Existence

When Roy Andersson’s Songs From The Second Floor premièred at the 2000 Cannes Film Festival, it was a genuine cinematic UFO, so singular that there was no ready point of comparison. Swedes had seen Andersson develop his style over hundreds of TV commercials, but for the rest of the world, it arrived out of nowhere. Nearly every shot constitutes a self-contained “sketch” of sorts, engineered on a set constructed to Andersson’s exacting specifications; in many ways, the film functions like elaborate still photography in which there’s usually a single element of playful motion, as if Gregory Crewdson had been infused with the spirit of Buster Keaton. This approach is so labor-intensive that it took seven years for Andersson to complete his follow-up, 2007’s You, The Living, which was more of the same. Though generally wonderful, it didn’t have the same revelatory impact, and that goes double for Andersson’s latest effort, A Pigeon Sat On A Branch Reflecting On Existence. Last year’s Venice jury awarded Pigeon the Golden Lion, but maybe Andersson was new to many of them. With this third permutation, the director’s signature style is showing clear signs of diminishing returns.

None of the three films—which Andersson has said form a loose-knit trilogy about “what it means to be human”—boasts a clear-cut protagonist, but Pigeon probably comes closest. Many of its sketches involve Jonathan (Holger Andersson) and/or Sam (Nils Westblom), two forlorn door-to-door salesmen who specialize in silly novelty items like plastic vampire teeth. Their efforts to interest people in their wares involve bids at mirth so pathetically morose that they serve as anti-humor, while their highly dysfunctional friendship plays like a parody of a bad marriage. Other diverse elements include the unexplained present-day appearance of Swedish King Charles XII (Viktor Gyllenberg), who reigned from 1697-1718 and seems to still be on his way to invade Russia, and various characters who drop dead practically the moment they’re introduced, precipitating a painfully awkward aftermath. One fellow, on a cruise ship, had just been given his lunch when he keeled over, and his corpse remains on the floor as the waitress asks which of the other diners would care for a free meal. After all, it’s already been paid for, and it’s getting cold.

That joke is typical of Andersson’s sensibility, which is simultaneously antic and despairing. But Pigeon sees him get uncharacteristically blunt at times, bordering on didactic. One of the film’s most unforgettable setpieces—opinions vary dramatically on whether it’s among the best or worst in Andersson’s career—has a group of well-dressed white people observing from a distance as African slaves are forced into a gigantic rotating version of the brazen bull, an ancient torture device in which people were roasted alive; the victims’ desperate (unseen) movements, as they struggle to avoid contact with hot metal, power the device, which produces musical notes. Unlike the vast majority of Andersson’s shots/scenes/bits, this one, in common with a couple of others in the film, isn’t even remotely funny—it’s just horrific. Andersson is certainly allowed to alter his tone, but the purpose of these barbarous interludes within his usual droll context isn’t at all clear. Is he indicting his own frivolity? Does he feel the need to acknowledge that some aspects of being human are too ghastly to be humorous? It’s uncomfortable in the wrong way.

Those are decidedly exceptions to the rule, though. For the most part, Pigeon is very much in the same mold as its two predecessors, which is part of the problem. Critics and cinephiles argue about the value of directors who make numerous slight variations on the same basic movie—Yasujiro Ozu is one titan who’s sometimes accused of endlessly repeating himself, and contemporary South Korean filmmaker Hong Sang-soo is another. Ozu and Hong get away with it because they’re fundamentally naturalistic artists, which means they have the entire messy continuum of human nature at their disposal. That’s inexhaustible. Andersson, by contrast, works in a deliberately expressionistic mode, with “characters” who are so divorced from verisimilitude that they all wear all chalk-white makeup and are coached to act somewhat robotically, even repeating the same lines. (Almost everyone in Pigeon says “I’m happy to hear you’re doing fine” at some point.) The “Roy Andersson movie,” as redefined with Songs From The Second Floor (he’d previously made two much more ordinary pictures), was astonishing the first time, and still striking the second time, but is now beginning to calcify into shtick. With his trilogy finished, it’s time for Andersson to explore new realms. He’s already demonstrated a capacity for reinvention.

GoWatchIt: Buy. Rent. Stream A Pigeon Sat On A Branch Reflecting On Existence