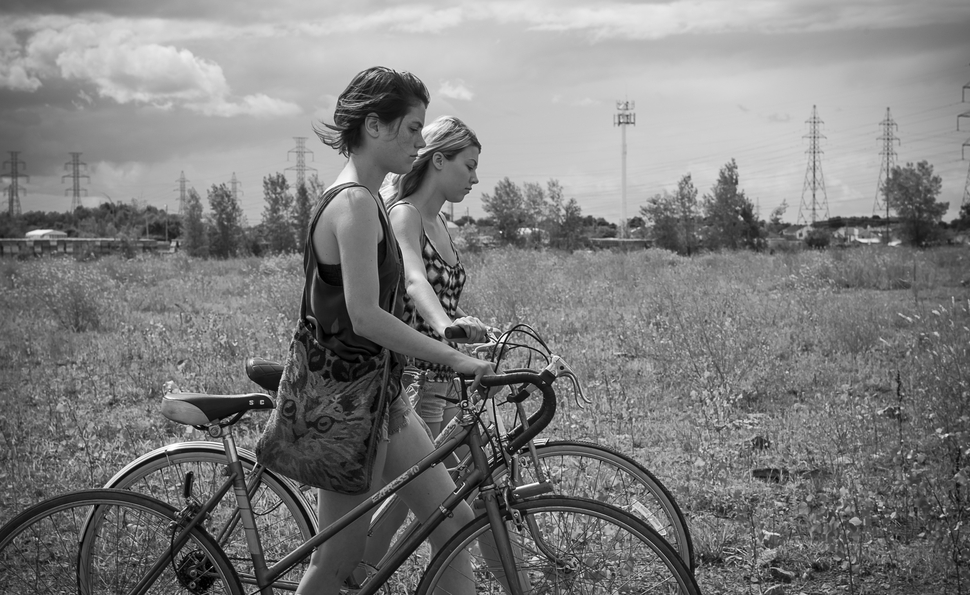 No explicit dream sequences occur in Tu Dors Nicole, even though the title informs the protagonist that she’s asleep. (Props to U.S. distributor Kino Lorber for recognizing that You're Sleeping, Nicole doesn't have the same poetic ring. Even the use of the familiar Tu Dors rather than the formal Vous Dormez carries meaning.) Instead, the entire movie takes place in what feels like a state of suspended animation. Anyone who’s spent a long, hot, lazy summer doing nothing much at all will be familiar with the vibe: By night, it’s hard to sleep; by day, it’s hard to move. The line between wakeful and comatose gets fuzzy. Tu Dors Nicole doesn’t indulge nostalgic clichés about adolescence, as epitomized by the phrase, “I was never the same after that summer.” It’s a tale of post-graduate malaise in which “that summer” stubbornly refuses to coalesce into more than a series of odd reveries, as if something magical is always just about to happen.

Set in an unspecified small town in Québec, apparently sometime in the 1980s or 1990s (as in David Robert Mitchell’s The Myth Of The American Sleepover, no Internet-era technology is ever seen), the film introduces twentysomething Nicole (Julianne Côté) as she sneaks out of a one-night stand’s bed in the middle of the night. Nicole’s parents are away on vacation, so she only has to deal with her older brother, Rémi (Marc-André Grondin)—though that’s a challenge, since Rémi plays guitar in a rock trio, and is using their house as a recording studio. Mostly, she hangs out with best friend Véronique (Catherine St-Laurent), making plans to fly to Iceland using Nicole’s new credit card, which she interprets as free money. (Nicole and Véro’s likely misguided assumption about Iceland’s weather is a fine joke that’s funnier for never being openly made.) In the meantime, Nicole begins a desultory flirtation with the band’s new drummer, JF (Francis La Haye), though he’s leery of hooking up with a friend’s little sister.

That isn’t much to hang a movie on. Writer-director Stéphane Lafleur, making his third feature (the first two, Continental, A Film Without Guns and Familiar Grounds, never opened in the U.S.), traffics exclusively in mood here, shooting on black-and-white 35mm to create a silvery, shimmering landscape of the mind. Nothing happens, but everything thrums. The film’s most blatantly surreal element is the recurring figure of Martin (Godefroy Reding), a 10-year-old boy whose voice has already changed; he considers this a license to hit on adult women, and keeps trying to seduce Nicole with world-weary platitudes. But there’s everyday wonder throughout, as when a car that keeps circling Nicole’s block late at night, emanating weird noises, turns out to be an exhausted new father trying to get his baby to sleep with a combination of vehicular motion and whale songs. (“It’s working on me,” he tells Nicole, holding up a giant to-go coffee.) Characters like this drift in and out of Tu Dors Nicole, which is forever drifting itself, though Nicole is anchored by Côté’s wonderfully quizzical, deliberately low-key performance.

None of this would work were Lafleur not doing gorgeously expressive work behind the camera. His puckish sensibility is evident from the film’s first seconds, as the sound of trickling water heard during the opening credits (white text on a black screen) continues over the first shot: a tacky photograph of a waterfall. When Nicole arrives home, she slumps onto a chair, her feet dangling over its arm at the far left edge of the frame; Lafleur then cuts to some time later, with Nicole now lazing on a couch at the far right edge of the frame. Sound is likewise expertly calibrated, with conversations between Nicole and Véro accompanied by the band's efforts at ideal microphone placement in three separate rooms of the house. (Among other virtues, Tu Dors Nicole boasts one of the most realistic garage bands the movies have ever seen.) One problem with such lovely aimlessness is that Lafleur, almost predictably, never finds an ending; what he comes up with feels a bit petty and small-minded, almost beneath Nicole. But that’s an easy weakness to forgive in a film that at one point has Rémy talking with Nicole in the backyard, suddenly walking off into the darkness, visible only by the tip of his lit cigarette, then returning, holding a chirping cricket in his hands. It’s hard to build a story entirely on grace notes, but Lafleur comes close.