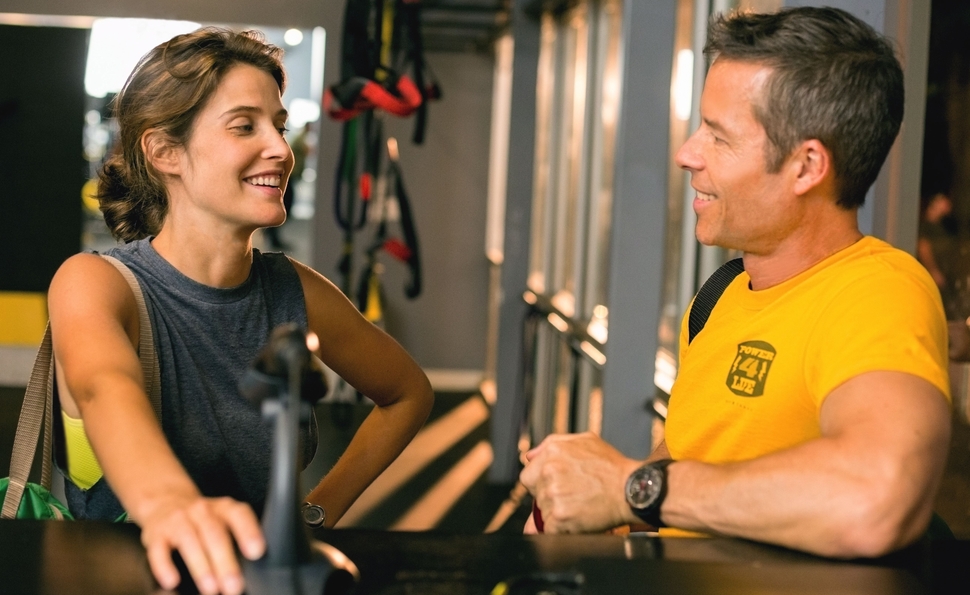 With his 2002 debut Funny Ha Ha, writer-director Andrew Bujalski quietly revolutionized independent film with an ultra-low-budget, 16mm feature that captured the fumbling inarticulateness of post-graduates still finding their way in the world. That revolution has since been given a name, “mumblecore,” that’s a credit and a curse to Bujalski, whose subsequent work—Mutual Appreciation, Beeswax, and Computer Chess, all excellent—has none of the affectation and visual indifference associated with the movement. In Bujalski’s films, the halting patterns of everyday speech are not a gimmick, but a reflection of insecurities and anxieties of characters who simply don’t have their shit together. So while Results may seem like a departure—the “ums” are scrubbed out and he’s working with recognizable stars for the first time (no, Gerald Peary does not count as a star)—it’s more like the inverse of the director’s previous films. His characters here are mostly confident and articulate, as motivated personal trainers must be, but they’re still a comical mess under the surface.

Playing the indie rom-com by his own rules and rhythms, Bujalski offers up a beautiful screen couple in Guy Pearce and Cobie Smulders, then proceeds to reveal emotions as jumbled as their bodies are taut. The first sign of inner turmoil comes when Kat (Smulders), on a morning run, spots the SUV of a deadbeat client and dashes after it like Robert Patrick in Terminator 2. As a personal trainer for Power 4 Life, a full-service gym in Austin, Texas run by the ambitious Trevor (Pearce), it’s not even Kat’s job to collect payments, but anger and indignation are at the core of her being, on top of insecurity and restlessness. For his part, Trevor imagines himself a Zen master type, delivering both his clients and his growing business to a state of serene balance and enlightenment. But his need for orderliness naturally affects his ability to handle chaos. Trevor and Kat have a history—all the Power 4 Life trainers do, an occupational hazard for sweaty, good-looking people working closely together—and they’re forced to contend with it when Danny (Kevin Corrigan), a new client, throws a wrench in the works. A newly minted rich guy from New York, Danny lives in a sparsely appointed McMansion and takes Kat as an instructor partly to get in shape, but also to relieve his boredom and loneliness.

As Kat’s relationship with Danny starts crossing professional boundaries, it kicks up deep-seated feelings of jealousy with Trevor, which in turn come around to affect Danny—a quintessential Bujalskian mess for Results to marinate in. Bujalski gets terrific performances from all three actors: Pearce isn’t asked to cover his Australian accent (nor is it explained, refreshingly), and he reveals the cracks in the driven types he’s played in films like Memento and L.A. Confidential; Smulders finally gets an opportunity to bring the brightness and appeal of her How I Met Your Mother character to the big screen, but with an element of piano-wire edginess; and Corrigan, the character actor’s character actor, takes full advantage of the extra time, scoring most of the film’s laughs. (Danny’s haplessness as a rich guy is a comic wellspring.)

There’s a degree to which Bujalski struggles to open up his offbeat sensibility to a more mainstream indie audience, especially when he has to plot his way out of a corner—the denouement, in particular, is the type of shoehorned conclusion that he has studiously avoided in the past. But Results also shows the mainstream bending to him, returning to the themes of jealousy and insecurity that were present  as early as Funny Ha Ha and Mutual Appreciation while assuming a tone that’s unusually low-key for a romantic comedy. Despite a too-neat resolution, the characters in Results haven’t figured themselves out, much less their relationships, and Bujalski is perfectly comfortable sorting through their confusion.