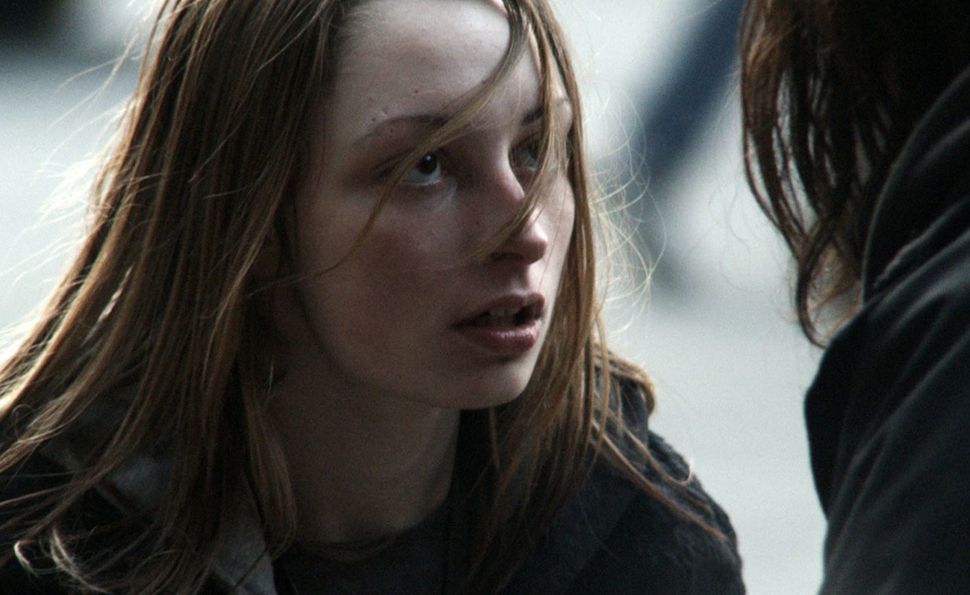 Love and addiction dance a pas de deux at death’s door in Heaven Knows What, Josh and Benny Safdie’s alternately lyrical and visceral portrait of homeless junkies on New York’s Upper West Side. Inspired by a memoir by Arielle Holmes, who essentially acts out incidents from her life as fiction, the film can neither be considered strictly a street-level docudrama or a mad love story; it’s an unstable hybrid of both. The Safdies (co-directors of Lenny Cooke) are playing with dangerous chemistry here, and with a breathtaking absence of caution, too: The intensity of Holmes’ relationships with the men in her circle are related to her addiction and theirs, which gives love the quality of a fix, and heartbreak the sickening pallor of withdrawal. These are young people for whom time exists in the space between one bag of heroin and another. They cannot see beyond their own immediate needs. And because the possibility of death is so tangible—hence the title, to some extent—there’s a plane-going-down quality to the central relationship that’s simultaneously romantic and catastrophic.

The Safdies set the tone from the start, as Harley (Holmes) storms into the public library where her boyfriend Ilya (Caleb Landry Jones) is watching YouTube videos and threatens to slash her wrists. The context for this threat comes later—and even then, the Safdies’ admirable resistance to conventional storytelling mutes it substantially—but for now, Ilya calls her bluff, and she promptly proves she wasn’t bluffing. A hospital visit later, the two haven’t sorted out their relationship, and the film trails off into other day-in-the-life episodes, including the introduction of a third major character: Mike (Buddy Duress), another addict and dealer who has a thing for Harley. Though Mike is a reliable (though irritable) supply of drugs and comfort for Harley, her doomed heart belongs to Ilya, whose capacity for violence equals his capacity for tenderness. But heroin is ultimately the hand of fate here, and nothing love has the capacity to conquer. They follow their addictions first. Occasionally, when they’re out boosting five-hour energy drinks for resale or furtively thrusting on the concrete, it feels like true passion and intimacy.

The Safdies aren’t the first to tackle junkie love as a subject, not the first to consider it against an authentically grimy urban backdrop, but Heaven Knows What defies more expectations than it satisfies. For one, the fog that clouds their characters’ perspective doesn’t pervade the film, which is so aggressive and in-the-moment that time becomes as hard for the audience to track as it is for Harley and her friends. The sound design also flies in the face of dramas that associate realism with minimalism. At times, the electronic score bleeps with an eerie, science-fiction discordance; at others, Isao Tomita’s synth interpretations of Debussy are modern romance redefined. The Safdies throw away the traditional markers of street dramas, and work from a broader emotional palette.

As Harley, Holmes has the arresting authenticity of a non-professional, with a sharp, striking face behind a nest of unwashed dirty blonde hair and darting, pleading eyes. Save for Jones, a trained actor whose animal magnetism stands out and blends in at the same time, the cast is also taken from the street, and the Safdies keep them all comfortably within the range of their experience. Heaven Knows What thrives on details of New York’s heroin subculture, and the de facto communities that can form and break apart like molecular organisms, but it’s also a movie, and it mounts their experiences on a scale that doesn’t pretend to documentary. The Safdies only stumble when they have to figure out some way for this story to resolve, but even then, the denouement is so perfectly understated that it holds it in balance. Heaven Knows What isn’t interested in merely exploring the world of New York City addicts. It wants to make their experiences felt, with the dissonant, amp-cracking roar of a punk anthem.