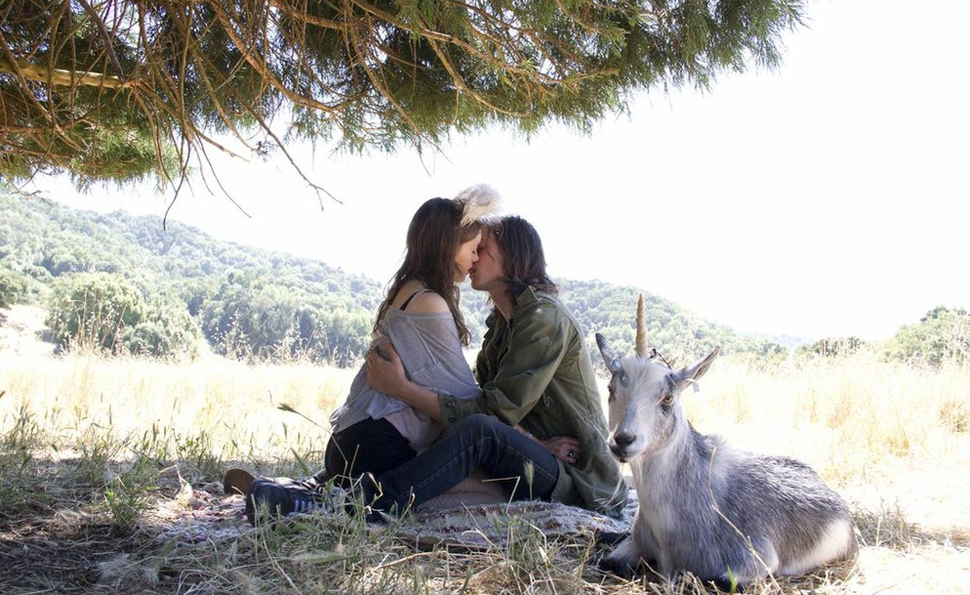 I Believe In Unicorns

The title of Leah Meyerhoff’s feature-length writing and directing debut, I Believe In Unicorns, seems designed to push away anyone dubious about preciousness, especially when it comes to stylish coming-of-age indies. If so, too bad. While far from perfect, I Believe In Unicorns is unusually attuned to how it feels for a teenager to have her first intense, quasi-mature relationship, and how it feels for her to use that love affair as an escape from some serious problems at home. The title—twee as it is—fits the movie. It’s about a young woman trying to cling to girlish ideals, even as life keeps reminding her that she’s practically an adult, with adult responsibilities.

Natalia Dyer stars as Davina, a Berkeley, California high-schooler who’s been taking care of her wheelchair-bound mother by herself since she was still a little girl, when her dad left them. In the movie’s opening scenes, Davina meets Sterling (Peter Vack), a scruffy skate-punk with a practiced line of seductive patter. He makes her feel special, and soon she’s spending all her free time with him in scuzzy rock clubs—or in his dingy bedroom, where she loses her virginity in an encounter that’s a little rougher than she expected. When they’re not making out or wrestling around on the ground like kids, they’re sharing details of their crappy childhoods—him growing up with an abusive father, her dealing with her mom’s MS—and feeling like soulmates. But when they head out on a long, aimless road trip, Davina gradually begins to realize that she isn’t living inside a fairy tale.

I Believe In Unicorns straddles the line between depicting immaturity and celebrating it. Before Davina and Sterling hit the road, they stop at a convenience store to stock up on pinwheels, water pistols, plastic dinosaurs, and temporary tattoos; between their sexual romps (which themselves resemble childlike horseplay), they spend a lot of time teasing each other, then shifting abruptly into maudlin, moony-eyed poetics. At the start of the film, an art teacher assigns her class a self-portrait, and whenever Davina is photographing her toys or speaking in voiceover about how much she likes to hold her breath for as long as she can in the bathtub, I Believe In Unicorns is a lot like Davina doing her assignment: giving a peek inside the candy-striped heart of someone trying a little too hard to be cute and quirky.

On the other hand, Davina is 16 years old. As painful as it is to watch at times, nothing about I Believe In Unicorns rings false, because Meyerhoff keeps contrasting what Davina’s expecting—needing, really—with what Sterling really has to offer. He’s devilishly handsome and has an outlaw charm, whether he’s using a rigged-up dollar to steal from vending machines, or talking about how he’s going to strike it rich with his band. But Sterling ignores Davina when she half-jokes that she could be his official photographer. Before long, he’s ordering her food for her and criticizing her appearance. Worse, his cockiness sometimes shades into violent outbursts, similar to their first sexual experience. Davina has always relied on a rich fantasy life to compensate for her daily disappointments, so she clings to Sterling longer than she should, because being with him is the happy ending she’s already imagined for herself.

That sense of distance between what Davina hopes for and what she gets makes I Believe In Unicorns cumulatively powerful. The movie’s first line of dialogue is, “There’s so much I want to say, but I don’t know where to start.” But that doesn’t apply to Meyerhoff, who approached this movie with an admirable focus on what she wants to get across, and how. She shot on Super 16mm film, with some Super 8 interludes and stop-motion animation sequences. Overall, the film has the fuzzy, sun-dappled look of a low-budget 1960s youthsploitation picture, with the hills and fields around the Bay area giving the world outside Davina’s house the feel of a wonderland. This is the most heartbreaking kind of teen drama—the kind that understands kids’ yearning to grow up and get out, but is honest enough to show that nothing comes easy.