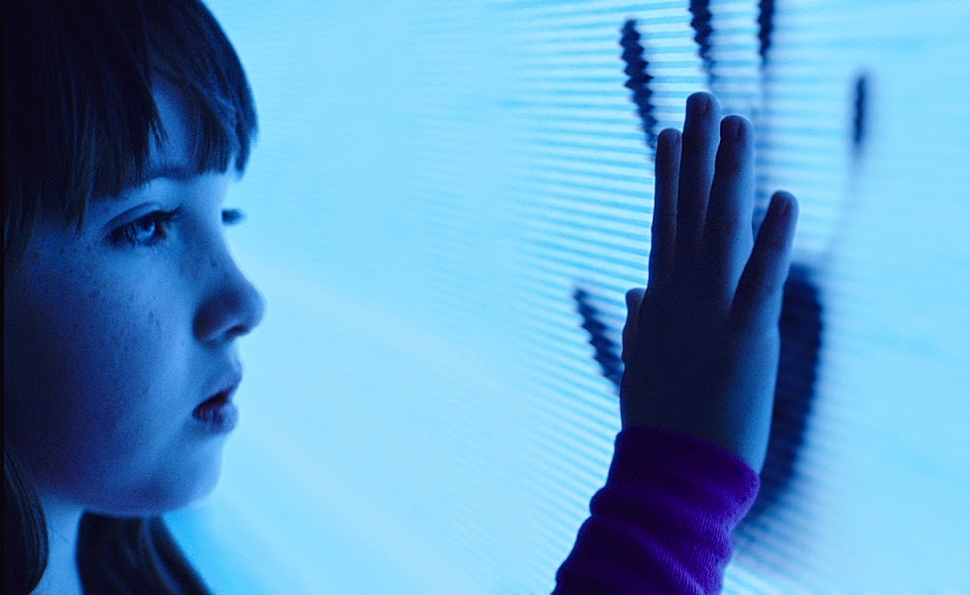 In 1982, Poltergeist director Tobe Hooper (and writer/producer/secret-director Steven Spielberg) spooked the apple juice out of a nation of kids with a canny combination of jury-rigged practical effects. With two little words—“They’re here”—a pipsqueak Heather O’Rourke brought the haunted-house subgenre back from the great beyond, after William Castle’s dime-store hokey fun laid it to rest in the early 1960s.

The suburban home that sets the stage for Gil Kenan’s superfluous new remake suffers from a spectral affliction of a different nature: the poltergeist of the original Poltergeist. By claiming the 1982 film’s name as its own, Kenan’s picture must necessarily justify its own existence as a separate entity, and not a demonically possessed regurgitation of Hooper and Spielberg’s frights. For the most part, however, the soul of Kenan’s film has been perverted, and it’d take more than a world-renowned paranormal investigator to salvage it. When Maddie (Kennedi Clements), the updated model of O’Rourke’s character, turns and intones those magic words, she lacks the original’s sing-song cadence. It’s a tuneless cover within a tuneless cover.

Like a gaping inter-dimensional closet portal, the Poltergeist remake sucks in overqualified actors and spits them out, not in a purgatory swarming with poorly rendered CGI skeletons, but in a needless recitation of a bona fide horror classic. The saddest casualties are Sam Rockwell and Rosemarie DeWitt as the terrorized clan’s pater and mater familias, easing their brood through the trials of relocation to a new house in a new town. Their organic, easy chemistry props up the remake’s underdeveloped lone thematic interest. The heart of 1982’s Poltergeist was the parental bond, the mother and father’s dauntless drive to recover and protect their child. Kenan’s film also centers on the family unit, though his approach involves gently probing its fissures. Money troubles have befallen the Bowen bunch, and a son (Kyle Catlett) scared of his own shadow, as well as Maddie’s inexplicable behaviors, only compound existing tensions. No horror-movie family is complete without a surly, resentful teenager, so Saxon Sharbino completes the core fivesome as Kendra. She’s the most vocal opponent of the Bowens’ move to their ghostly new digs, and the main offender when Mom and Pop half-jokingly refer to “those jerks” after a long day of unpacking.

The Bowen abode has foundational problems that make flying termites look like a day at the beach; an infestation of malevolent spirits swarm around the graveyard on which the home was built, a minor property detail the realtor omitted. Supernatural domestic disturbances ratchet up from slightly shifted furniture to full-blown mayhem (two words: demon squirrel), and before long, little Maddie has been kidnapped by the specters. Kenan sweeps all the family’s problems aside as the parents spring into action to retrieve their daughter, which doubles as an overly basic statement on the duties of parenthood, and a convenient cheat code to minimize untied plot threads. (If the family’s so strapped for cash, why is Rockwell buying fancy new gifts for everybody? Just ask Anton Chekhov.)

The Bowens call in the professionals, a pair of divorced ghost hunters played by Jane Adams and a delectably arch Jared Harris, doing their darnedest with the wafer-thin characters they’ve been dealt. Their rapport is the most welcome departure from the original film, bringing a lightness that still can’t buoy the bland rehashing of old tricks. The other attempts to transpose Hooper’s film to the 21st century—using the eerie feedback from an iPhone as a detector for poltergeist activity, sending a camera-equipped drone to explore the astral plane—fail to add anything meaningful. Almost all the scares that connect have been imported from the original. That is to say, the terror inherent to clown dolls is eternally enduring.

It bears mentioning that Kenan is a perfectly competent director, just weighed down by the project’s inherent needlessness. His observant, unobtrusive camerawork establishes the spatial relationships of the house’s floor plan comfortably and naturally, which becomes critical once all hell breaks loose. His scares are about as fearsome as an empty Poltergeist DVD case—which is, in many ways, what this is—but it isn’t hard to imagine Kenan flourishing in a different genre.

If 2015’s Poltergeist was simply a mediocre horror film, it would most likely provide young couples with decent background noise to muffle the sounds of their fierce make-out sessions. But because 20th Century Fox insisted on drawing on the original brand’s popularity, Kenan’s film ends up as a markedly inferior iteration of something that already exists. Though the memory of Hooper’s picture haunts every frame of nü-Poltergeist, Kenan’s will fade unseen into the great beyond first.