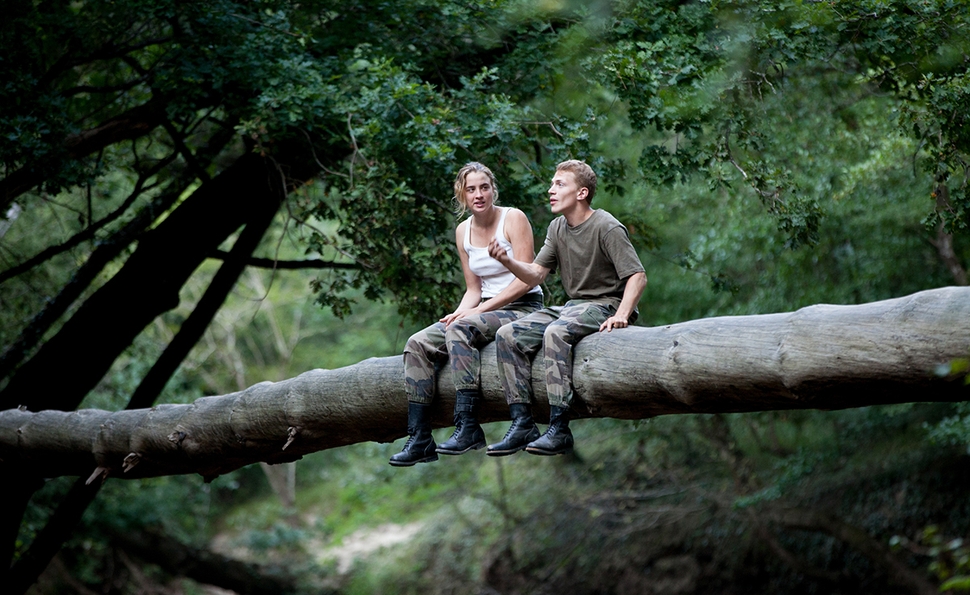 Pity the poor filmmaker lucky enough to land foreign distribution. They can hire the best translators, they can painstakingly triple-check figures of speech in the subtitles, they can even do another round of press in a second or third language, and still nothing can protect them from a local marketing executive with a horrible idea for a new title. There’s a certain cultural logic to it. French audiences are more likely to see a film with “sex” in the title, so Step Up becomes Sexy Dance, while No Strings Attached becomes Sex Friends. Italians apparently don’t like lies, mothers, or dying, so Lies And Lullabies, Some Mother’s Son, and Dying Young all get released as Scelta D’Amore (A Choice Of Love) within a few years of each other. Americans, it seems, love bad puns, so Thomas Cailley’s charming debut feature Les Combattants (The Combatants) will forever be known in the English-speaking world as Love At First Fight. The title does a real disservice to the film, a romantic comedy made with both visual and narrative intelligence, centered by great performances from Kévin Azaïs and Adèle Haenel.

Azaïs plays Arnaud Labrède, a lackadaisical young man who, upon meeting Haenel’s Madeleine Beaulieu, promptly defeats her in a wrestling match at an army recruiting event by biting her wrist. (“I did an armlock,” he lies to his friends as he walks away.) After such an auspicious start, it’s inevitable that they’re forced to spend time together: Arnaud is trying to help his older brother (Antoine Laurent) keep the family carpentry business going in the aftermath of their father’s death, and as luck would have it, Madeleine’s parents want a garden shelter built.

The romance that follows strays close to Manic Pixie Dream Girl territory—Madeleine, a college dropout with a background in macroeconomics, is convinced the apocalypse is nigh—but her quirkiness is grounded by genuine contempt for Arnaud. And Haenel, who has a wonderful variety of glares, manages to sell her commitment to her own goals, however bizarre they are. It would be more accurate to say that Arnaud wants very badly to be in the kind of movie where a woman saves him from himself, but he’s disappointed: Madeleine’s withering look when he tries to talk her into taking a baby ferret as a pet is a particular standout. (He keeps it himself.)

But it’s unfair to treat the film as some kind of deconstruction of narrative tropes, because it’s driven by mood as much as plot. The first act is the film’s best: the candy-colored cinematography, shot by the director’s brother, David Cailley, captures the locked-in-time feeling of a lazy beach town, a place where Arnaud can crash any party, but is starting to wonder why he’d want to. Cailley finds some wonderfully strange images here: a bright orange army recruiting truck parked in front of a derelict beachfront mansion; frozen chicks, downy fuzz matted with ice crystals, slowly rotating in a microwave. The second act, in which Arnaud and Madeleine enlist in boot camp—she wants free survival training, he’s got nothing better to do—is nearly as visually striking, adding rich greens to the palette. It’s sort of an anti-Full Metal Jacket: Their instructor calls for a 15-minute cigarette break when he gets flustered, and Madeleine’s answer to every tactical challenge is “Every man for himself.” But the third act, a pastoral idyll, drags, and the finale is a serious misstep. Madeleine spends the entire film working to become Katniss Everdeen, but when a minor apocalypse arrives, Cailley doesn’t even let her be Annie Hall. It’s as unfair as retitling the film Love At First Fight, and there’s no vulgar American marketing executive to blame.