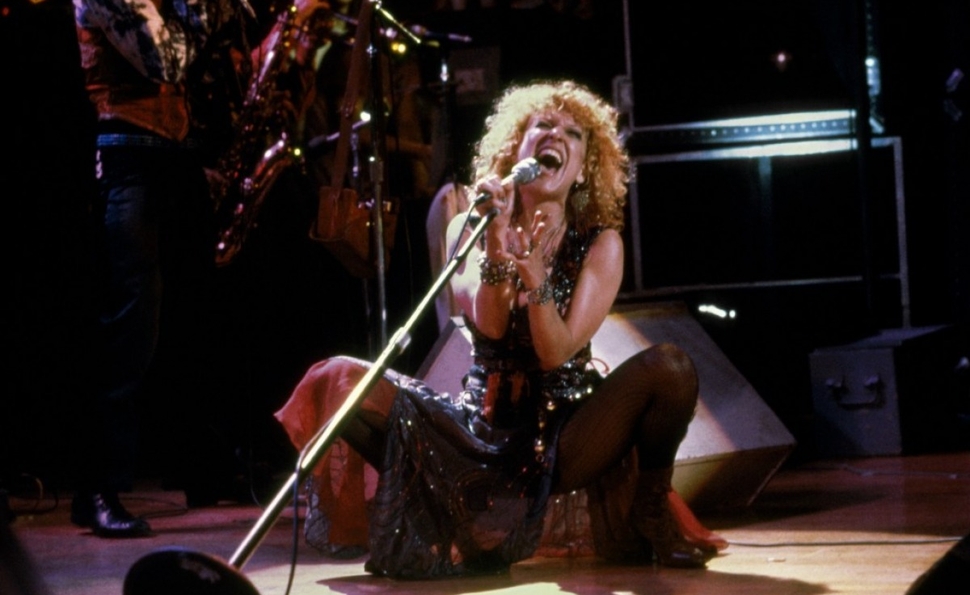 Not to take anything away from director Mark Rydell—or screenwriters Bill Kerby and Bo Goldman, for that matter—but the 1979 rock melodrama The Rose really belongs to two people, neither of whom wrote or directed. One is cinematographer Vilmos Zsigmond, who shot the movie at the end of one hell of a decade, in which he worked on McCabe & Mrs. Miller, Deliverance, Obsession, Close Encounters Of The Third Kind, The Deer Hunter, and more—arguably defining the look of the 1970s on film. Everything in The Rose has Zsigmond’s hazy glow, as though the characters were evaporating on camera, about to leave behind only a puddle of sweat and pinkish goo. In an interview included on the new Criterion Blu-ray, Rydell says he told Zsigmond the movie “should look like an abdominal operation,” which it does: all red and glistening.

A good third of The Rose consists of concert footage, recorded live and captured on the fly by Zsigmond and a crew of camera operators drawn from the ranks of his closest peers, including Conrad Hall, László Kovács, Owen Roizman, and Haskell Wexler. For those keeping track, that’s a crew with six Oscar wins and countless nominations, Zsigmond inclusive. So while the musical sequences have a documentary quality that’s rare for this kind of movie, the shots employ the same striking angles and luminous color as the rest of The Rose.

It helps that the cameramen have such a photogenic subject. Bette Midler stars as Rose Foster, a rock ’n’ roll superstar in the mold of Janis Joplin: raw-voiced, lusty, and teetering on the brink of collapse. (The Rose actually started life as a Joplin biopic, until Rydell and Midler asked that it be converted into fiction.) On the stage, performing moves mapped out by her usual choreographer, Toni Basil, Midler looks like a combination of Mick Jagger and a hoochie-coochie dancer. She wriggles, writhes, thrusts, and swears, while singing a set of songs much harder-edged than her early-1970s cabaret act. Midler had a good decade herself, prior to The Rose. She rose to fame performing with Barry Manilow in one of New York’s gay bathhouses, then won a Grammy and an Emmy, and became one of Johnny Carson’s favorite guests on The Tonight Show. But she pushed herself to new places for her first big movie role, and earned an Oscar nomination.

On the Criterion disc, Midler says that even when The Rose was the Joplin story (and called Pearl), she was drawn to the script because she understood it, being intimately familiar with the unique stresses of female singers. Her Rose interacts with the press and her public by adopting a sassy variation on her natural Florida accent, talking up the virtues of “staying stoned and getting laid”—effectively sexualizing herself before anyone else can do it. But she still suffers a series of indignities on her never-ending tour. A traditionalist country singer-songwriter (played by Harry Dean Stanton) calls her an embarrassing floozy who doesn’t deserve to sing his songs because she couldn’t possibly understand them. Her band ignores her when she says she’s tired and wants to shorten the set list. And when she makes the mistake of suggesting she wants to take a year off, her manager (Alan Bates) waves her contract in her face and says, “Lay off for a year, and they’ll bury you in the remainder racks.”

The Rose has a slight plot, mainly following the heroine as she boozes her way across the country in 1969, accompanied by an AWOL soldier named Huston Dyer—the first man ever to be sweet to her without expecting anything in return. Frederic Forrest plays Dyer, and earned an Oscar nomination for a role that strikes a tricky balance between marveling at Rose’s vivacity and being repulsed by how far out of bounds she goes. The movie toes that same line, enjoying the grand show Rose puts on—whether she’s staggering unashamedly through a city’s red-light district, or, in a nod to Midler’s roots, singing along with a Rose impersonator at a drag show—while lamenting that she’s due for a hard crash.

The flame-out happens in The Rose’s final third, set mostly in Rose’s hometown, where she’s about to play the biggest show of her life. For a film that could’ve easily been a tawdry piece of rocksploitation—all wanton misbehavior and self-righteous tongue-clucking—The Rose is unusually and admirably measured down the stretch, working in several long, quiet scenes that dig into the roots of who Rose is. Rydell, Kerby, and Goldman deserve a lot of credit for their restraint and sensitivity, as they expose a woman who was criticized and undervalued at home, and ran away into a business where she’s scrutinized and overworked.

But again, the concluding sequences of The Rose—including the stunner of a final scene, set at Rose’s big hometown concert—wouldn’t work without the full commitment of Midler, who always seems poised between a bawdy guffaw and thick mascara tears. And they wouldn’t work without Zsigmond, who holds close on Midler’s preternaturally expressive face—which at times looks like an Al Hirschfeld caricature of Bette Midler—while leaving enough room around the edges of the frame to capture the soft crimson radiance of her aura.

In addition to a Rydell commentary track (in which he raves about his cast and crew, and delivers a mini-manifesto on the cathartic power of drama), Criterion’s Blu-ray of The Rose contains new and old interviews with Midler, Rydell, and Zsigmond, each illuminating in its own way. In the new Rydell interview, he talks about his method of dealing with someone as untrained as Midler was at the time: by making the scenes as real as possible, to provoke a natural reaction. In footage from 1979, meanwhile, The Today Show’s Gene Shalit casually runs down a list of drugs, asking if Midler uses them—and she answers him just as conversationally. That’s an example of how different the culture was 35 years ago, but it’s also an illustration of how the press’ questions vary for the person in the spotlight, vs. the person deciding when to switch it on.