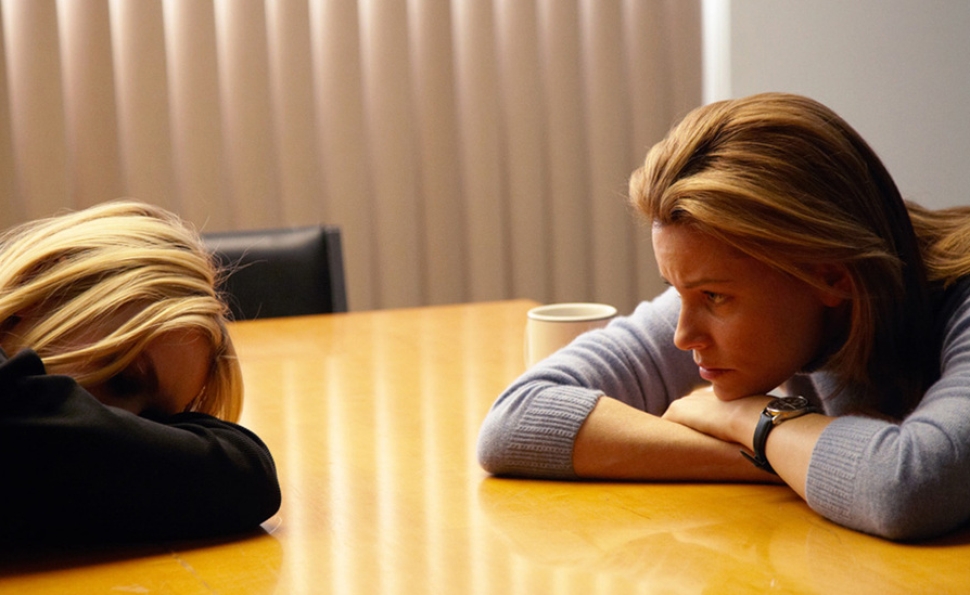 Every Secret Thing is the rare contemporary film that focuses on female characters and gives women the opportunity to tell their story, in front of and behind the camera. Amy Berg, the documentarian responsible for the Academy Award-nominated Deliver Us From Evil and the West Memphis Three exposé West Of Memphis, directs. Nicole Holofcener, well-known for putting women front and center in numerous astute indies like Lovely & Amazing and Enough Said, adapted the screenplay from the novel by award-winning mystery writer Laura Lippman. Elizabeth Banks, Diane Lane, and Dakota Fanning lead its ensemble cast. For God’s sake, one of its producers is even the great Frances McDormand, who recently noted in an NPR interview that female characters in movies “don’t often have that kind of richness” that they have in literature. With a pedigree like that, it’s easy to hope for richness in Every Secret Thing, a deliberately ambiguous revisiting of what really happened before, during, and after two young girls committed a horrific crime.

Unfortunately, this procedural/character study unfolds in a manner that feels more generic than genuinely deep. Berg, making her fiction debut, and her director of photography, Rob Hardy, push Every Secret Thing into the overcast dimness that has become a color-palette requirement for cinematic narratives in which loved ones get murdered or go missing. If the paint on this movie had a name, it would be called Gone Baby Gray. Some of the plot details also recall other recent entries in the genre, including one directed by Ben Affleck (Gone Baby Gone) and David Fincher’s picture starring Affleck (Gone Girl).

An extended flashback that opens the film shows pre-teens Alice Manning and Ronnie Fuller—a pair united not by friendship so much as their respective relationships with Alice’s overly permissive mother, Helen (Lane)—getting kicked out of a popular girl’s pool party after Ronnie has a violent outburst. On their way home, they discover an infant left alone in her stroller on her front porch. Cut to the opening titles, which, via images of newspaper clippings, explain that the baby—Olivia Barnes, granddaughter of the first African-American judge in the Hudson River-adjacent Orangetown, New York—was kidnapped and found dead, and Alice and Ronnie were found guilty in her murder. The story resumes years after Olivia’s death, shortly after 18-year-olds Ronnie (Fanning) and Alice (newcomer Danielle Macdonald) have been released from juvenile detention and return to Orangetown, attempting to resume normal lives. Around the same time they come back, a young girl disappears during a shopping trip with her parents, prompting Detective Nancy Porter (Banks), the same cop who found Olivia’s body years before, to investigate. Naturally, before long, Porter turns her seasoned, crime-solving eyes to Ronnie and Alice.

West Of Memphis proved Berg knows how to tell a gripping true-crime story, even when it’s been told before. She and Holofcener find some success in pacing, tossing in plot twists in just the right spots needed to convince the audience to stick with Every Secret Thing until the end. The problem is that most observant movie-watchers, especially those conversant in the language of crime dramas, will see some of those curveballs coming long before the wind-up. Certain details about the Olivia Barnes case are withheld for a while, raising reasonable doubts about the Ronnie and Alice’s guilt in both that incident and the current one Porter is trying to solve. There are even hints that Every Secret Thing may have its own version of Gone Girl’s Amazing Amy. But those hints are dropped in such an obvious way that the multiple reveals near the end of the film will likely result in a nonchalant, “Oh,” instead of the gasping “Wow!” that Berg and company are clearly seeking.

Fanning underplays Ronnie so much that she barely registers. Macdonald, on the other hand, dances with Alice’s multi-faceted sense of victimhood in a way that’s sometimes effective. When she tells her mother she’s “fat and lonely and needs attention,” then immediately laughs off that confession as a practical joke, the moment lands with just the right off-kilter sting. But too often, Macdonald hits her emotional beats a touch too hard. The strongest performance in the film comes from Banks, who imbues Porter with a mix of hard-nosed tenacity and capacity for empathy that almost overcomes the stereotypical role of “Detective For Whom This Case Is Deeply Personal.”

There’s an opportunity in Every Secret Thing to deepen this missing-girl saga into a commentary on the ways mothers and daughters, as well as girls and women more generally, fail to serve as anchors for each other in a society that often judges them on their appearance and class. At times, Berg seems to be leaning into that idea, but before she can truly explore it, she gets distracted by her duties as director of a far too familiar crime procedural.