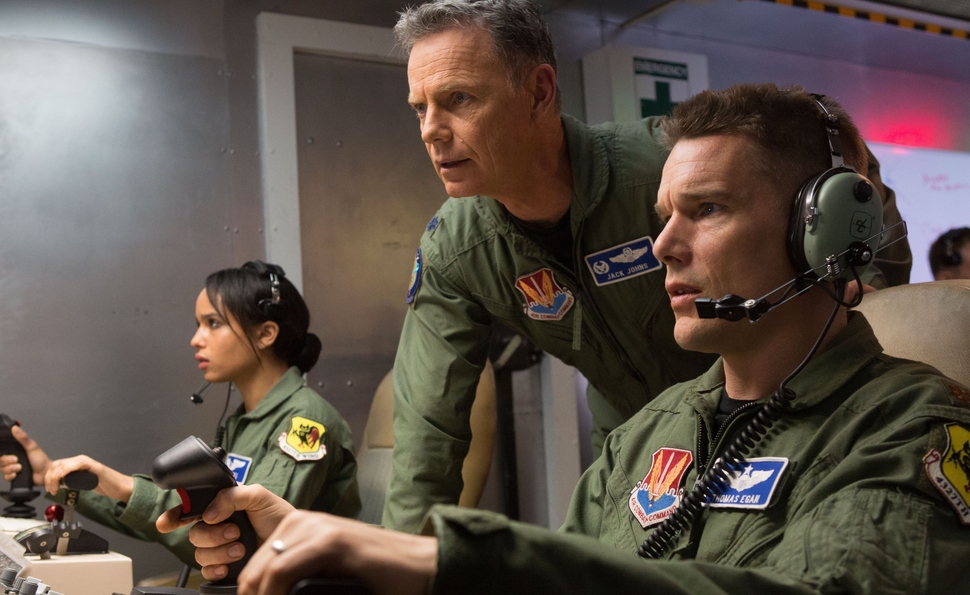 Andrew Niccol wants to say things about the U.S. military’s use of drones. As an accomplished writer-director, he has the skills and the industry connections to say them in a film. But what kind? He could’ve made a documentary, but the man behind Gattaca and S1m0ne isn’t a documentarian. Besides, there’s no chance any of the American armed forces would give an anti-drone filmmaker the kind of access he’d need to tell a compelling non-fiction story. The best Niccol could’ve hoped for would’ve been to run through all the facts and figures via talking heads and graphics—making a PowerPoint presentation, essentially. So instead, he wrote a script, hired a cast, and directed a dramatization of his research into a program he abhors. The result? A movie as wonky as the issue-doc he chose not to make.

Good Kill stars Ethan Hawke as Air Force Major Thomas Egan, who has, on paper at least, the ideal job for a person in the military. Rather than risking his life and marriage by fighting overseas for extended tours, he lives in a nice-looking suburban house in Nevada with his wife Molly (January Jones), and works in a secure bunker in the desert, operating a bomber by joystick. But Thomas misses the sensation of actual flying, and while he respects his commanding officer, Colonel Jack Johns (Bruce Greenwood), most days, he takes orders over speakerphone from a shadowy government official (voiced, inevitably, by Peter Coyote) from CIA HQ in Langley, and committing acts that could easily be perceived as war crimes. So Thomas numbs his conscience with alcohol, and barely speaks to Molly, who’s begun looking for emotional support and affection elsewhere.

Some of Good Kill justifies Niccol’s decision to argue against a major foreign-policy issue via a fiction feature. Greenwood gives a strong performance as the movie’s devil’s advocate, who spends nearly every minute of his screen time talking rapidly and at length about how drone warfare is ignoble and dehumanizing, yet essential to keeping terrorism in check. Good Kill clearly disagrees with Johns’ conclusion, but it respects his argument, which boils down to: This is the way war is now, so better that it be fought by the actual military, rather than teenagers recruited from PlayStation first-person-shooter tournaments. Johns isn’t the villain here. Niccol reserves his most intense loathing for Coyote’s disembodied “Voice Of Langley.”

The teleconferencing/bombing sequences are Good Kill’s most dramatic and cinematic. As Thomas and his squad peer into screens showing indecipherable activity in small villages on the other side of the world, Niccol effectively conveys the dilemma they face every day, keeping an eye on impoverished communities whose hard lives get worse when the U.S. rains explosives on them. Niccol gets at how the lingo of drone-strikes—using “prosecute” for a launch, “splash” for an explosion, “double-tap” for a follow-up launch, and so on—attempts to insulate the crew from what they’re actually doing. Except it doesn’t. They wear flight suits like regular pilots, but the drone operators don’t get to zoom off after a mission. Instead, they watch their monitors while their missiles are in transit, waiting to see whether those unsuspecting human figures on the screen are properly blown to bits. Through images alone, Niccol captures how doing this day after day could wear on people.

But he doesn’t surround those scenes with much plot, or populate the movie with compelling characters, apart from Colonel Johns. As Molly, poor January Jones is stuck doing a variation on her Betty Draper from Mad Men: the long-suffering wife with an uncommunicative husband. And Hawke’s Thomas makes for an unappealing lead, speaking into a whispery monotone when he talks at all, then sneaking off during work hours to swill vodka in the bathroom. Aside from one scene where he uses his drone to watch over a desert patrol in need of a good night’s sleep, Good Kill’s hero is both unsympathetic and uninteresting.

That’s partly intentional. Niccol means to show how the drone program can reduce a formerly good man to mush. But making that point comes at the expense of making a nuanced, vibrant motion picture. Thomas’ breakdown feels like an attempt to illustrate a statistic, in the same way Good Kill’s awkwardly offhand dialogue about how much a bombing run costs could’ve just as easily have been spoken directly into the camera by an expert in a suit. At one point in the movie, a character waves off the drone criticism, saying, “I’ve heard all the bleeding-heart arguments, I’ve read all the bumper stickers.” Niccol seems determined to make sure that Good Kill’s audience gets similarly up to speed.