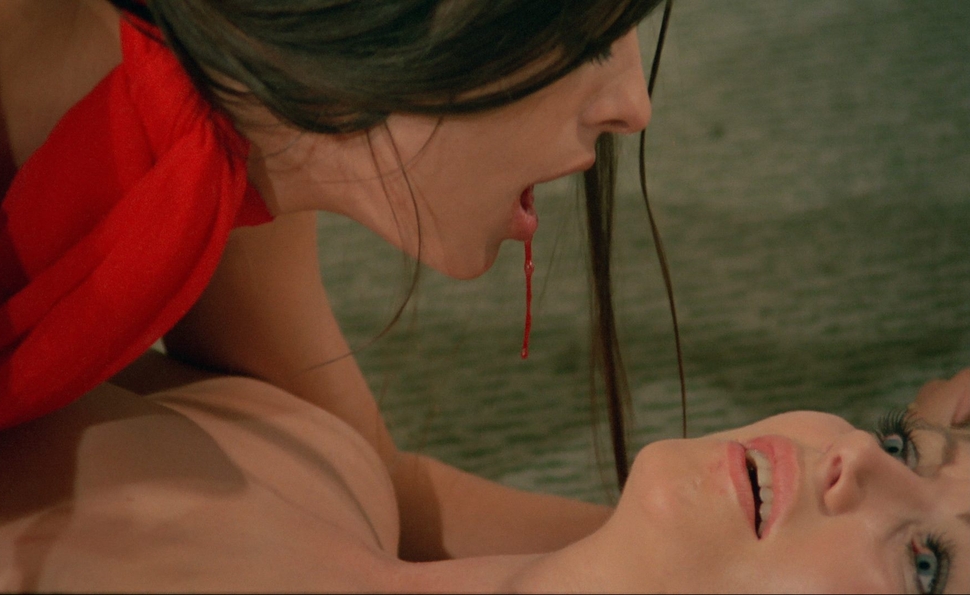 Cult hero Jess Franco directed somewhere in the neighborhood of 150 films, quite likely more, in his career, starting with larger genre productions in the 1960s before dipping into cheap exploitation fare, pornography, and the more ambiguous spaces between. Franco’s 1970 film Vampyros Lesbos, perhaps the most celebrated work in an oeuvre celebrated only by the few and the fervent, could fairly be dismissed as a thin pretext to softcore, with muddled vampire psychology ladled over prolonged sequences of beautiful women getting it on. Even Franco himself seems to acknowledge this, in arted-up theatrical setpieces where men with carefully trimmed mustaches stare blankly at the stage while this dark dance of seduction unfolds. Though elements of Franco’s film are almost insultingly crude—he has been likened to Ed Wood on occasion—it also gave exploitation audiences something different, a mesmeric vibe that’s perfectly in line with the Dracula myth, no matter how far astray the film takes it.

Some of the credit for that vibe belongs to the soundtrack, which enjoyed a resurgence in the mid-1990s when it was released under the title Vampyros Lesbos: Sexadelic Dance Party. One track (“The Lions And The Cucumber”) later found its way into Quentin Tarantino’s Jackie Brown. And some of it certainly belongs to Franco’s muse at the time, Soledad Miranda, whose vampire vixen deserves a place somewhere in the creature-of-the-night pantheon, perhaps on the end furthest from Max Schreck. The plot is somehow both wispy and incomprehensible, but then, Vampyros Lesbos is more of an intuitive, dreamlike experience than a gripping horror-thriller about the dastardly schemes of the undead. Going by the wondrous name of Linda Westinghouse (Ewa Strömberg), the innocent heroine works as a lawyer by day. By night, she slips into the same erotic dream where Miranda ravages her body before going for the jugular. When the firm sends Linda off to a Turkish island to resolve a real-estate issue, her dreams become semi-reality when Miranda appears in the form of client Countess Nadine Oskudar. Though warned by a creep (Franco) in Istanbul that the island is a place of madness and death, Linda submits herself to the Countess—sunbathing, drinking a little red wine, and losing herself to hypnotic coitus. Linda’s disappearance alarms her boyfriend and a slice of the scientific and psychiatric community, but they’re powerless to do anything about it.

On top of the psychedelic score, which combines wa-wa softcore mood-setting with trippy blasts of guitar and guttural moans, Franco brings Vampyros Lesbos across with a bright yet minimalist color scheme, scene-setting shots of Istanbul’s spires and glimmering seas, and more zooms than a Formula One car on race day. It would be absurd to make an argument for a film this flush with lipstick lesbianism as a feminist picture—seriously, don’t make too much of the “but” that’s about to happen after the next em-dash—but Franco associates male sexuality with torture, violence, voyeurism, and possession, and suggests that Linda’s attraction to the Countess is as much retreat as surrender. (There’s a history of female vampires as feminist boundary-pushers, and the metaphors extend here.) Still, the extent to which Franco manages the themes of this movie—or any of his 150-plus movies, for that matter—is questionable to say the least, and vast stretches of Vampyros Lesbos lapse into tedium, whether they’re extensive love scenes or, worse, the blatherings of serious men with “Dr.” before their names. What ultimately lingers is the perfume mist of Franco’s art-damaged softcore, and the glare of Miranda’s penetrating Barbara Steele eyes.

One of a glorious things about the home-video market in 2015 is that a Jess Franco vampire lesbian movie can get more TLC than most Best Picture winners. Severin has put together a good package here. A 20-minute interview with the late Franco rambles on a bit—and requires subtitles, even though much of it’s in English—but “Sublime Soledad,” a featurette built around Soledad expert Amy Brown, is a fascinating tour through a varied career that started in flamenco dancing, continued in every kind of genre throughout the ’60s, and finally landed with her collaborations with Franco, which unleashed a darkness and sexuality that had been inexplicably suppressed before. Franco scholar Stephen Thrower gives the context for Vampyros Lesbos and its insta-sequel She Killed In Ecstasy (also released on Severin Blu-ray), which came after a period where the director worked for cheap, without a producer, and with a freedom he was subsequently unwilling to relinquish. Also included is Franco telling the story of how he inspired Yoda, and an entire second DVD of the Spanish-language bootleg cut of the film.