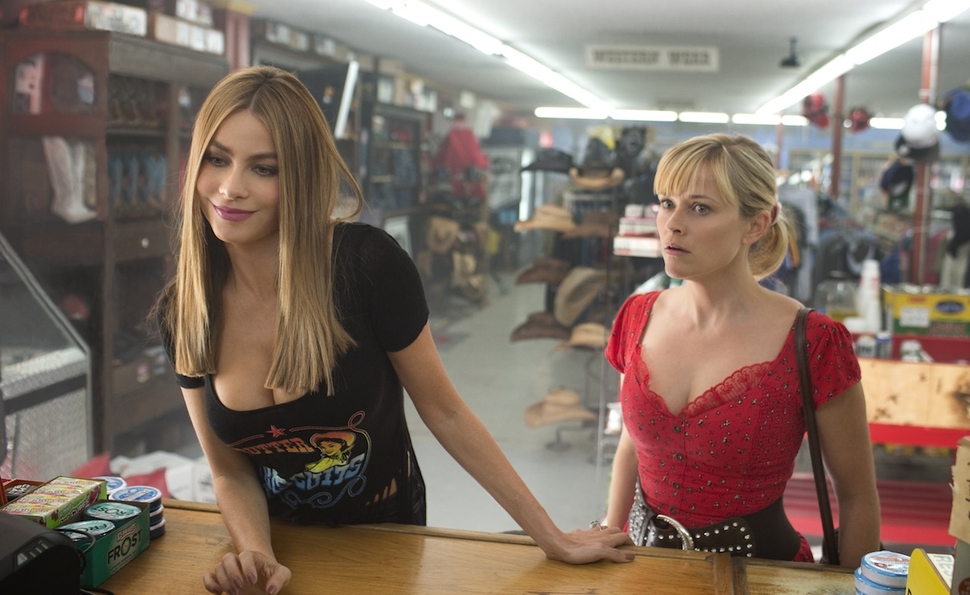 Few setups are sturdier than the buddy road comedy. Put two characters on the road, let each stop serve as a chance for misadventure, frustration, and bonding, and drag them over a bumpy path to the end of the trail. But even the sturdiest setups can prove comedy is never a sure thing. For every unlikely-but-terrific pairing, like Robert De Niro and Charles Grodin in Midnight Run, there’s an unlikely-and-unwelcome pairing like Reese Witherspoon and Sofia Vergara in the Midnight Run-inspired Hot Pursuit, which struggles to get any mileage out of a team-up between Cooper (Witherspoon), a Texas cop with something to prove after a mishap that made her a laughingstock, and Daniella Riva (Vergara), the wife of a drug informant. One’s uptight. The other’s flamboyant. Put them together and… Well, not much happens, except the desperation Hot Pursuit brings to its attempts to wring laughs out of the contrast.

It didn’t have to be that way. It would be a stretch to say that Hot Pursuit opens well, but its first scenes at least suggest some effort was put into it. As usual, Witherspoon gives it her all, fully investing in a character whose intensity and profession scares off potential suitors she meets on a Christian dating site, and who recites police codes to calm herself down. The daughter of a highly respected cop, she wants nothing more than to follow in her father’s footsteps, but as the film opens, she’s been reduced to working in the evidence locker after Tasering a kid for calling shotgun on a car ride. (Cooper has never heard the colloquial use of the word.)

But the film, co-written by David Feeney and John Quaintance and directed by Anne Fletcher (The Proposal, 27 Dresses), keeps dropping none-too-subtle suggestions that other obstacles stand in her way. One male cop after another is condescending to her, even Detective Jackson (Richard T. Jones), the relatively nice guy she’s partnered with to bring Daniella and her husband back to Dallas. Things don’t go as planned: Daniella’s home becomes the site of a shoot-out between two rival factions, including a pair of masked gunmen. Jackson and the husband die, and Cooper and Daniella abruptly depart in a classic Cadillac. When it becomes apparent that some of Cooper’s fellow officers were the masked men, the two women have to flee multiple bad guys as they try to make their way back to the city.

This involves yelling. A lot of yelling. On Modern Family, the sitcom that made Vergara a star, she has her share of over-the-top moments, but also some subtle ones. Hot Pursuit finds her operating at the shrill top of her range at every moment, pushing the scene to be louder and broader. She doesn’t have to push particularly hard: The film also asks Vergara and Witherspoon to hide inside a deer costume and to make out with each other in an attempt to distract a rifle-wielding farmer (Jim Gaffigan) whose car they’ve been caught trying to steal. That last scene is Hot Pursuit’s probable nadir. It’s both obvious and staged in a way that’s more awkward-uncomfortable than awkward-funny. Which raises a larger issue: It’s great that Hot Pursuit is part of a rising trend that’s seen more comedies starring and focused on women (and in this case, directed and produced by women). But is that really progress if such films require their protagonists to catfight on a hotel bed while “Black Betty” blares on the soundtrack?