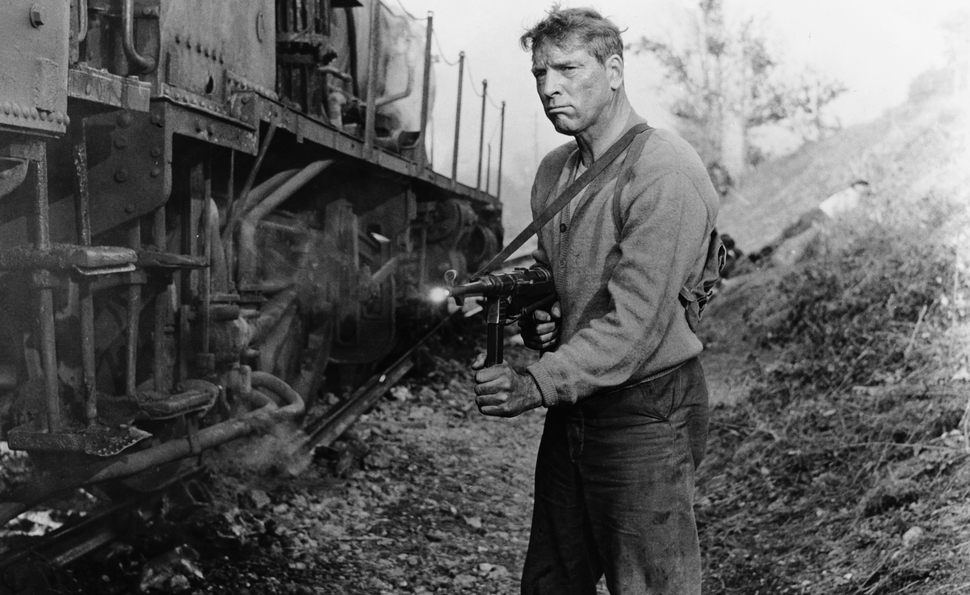 On the commentary track for his rip-roaring 1964 WWII movie The Train, director John Frankenheimer calls it the last studio action picture ever shot in black and white. And that’s the primary takeaway from watching it in 2015: That if filmmakers are ever inclined to shoot in black and white for that throwback effect, action pictures are the way to go—not just neo-noirs or silent-comedy homages or historical dramas. The stark, deep-focus images in The Train have a clarifying effect on the action that makes the film virtually unthinkable in color, playing as if the newsreel before a matinee suddenly morphed into the main attraction. Using almost all real locations—and blowing up many real trains and trucks, too—Frankenheimer makes a kick-ass genre film seem like history writ large, even if that history involves Burt Lancaster playing a Frenchman. Much like The Great Escape, another rousing fact-based/fact-fudging WWII thriller released the year before, it has a “print the legend” quality that’s an entirely forgivable trade-off for what really happened.

Frankenheimer took over for a pre-Bonnie & Clyde Arthur Penn when Lancaster had him fired shortly after production began, but the result was much more fruitful for the director than when he did gun-for-hire work three decades later on The Island Of Dr. Moreau. Under orders to make a more action-oriented movie than Penn had planned, Frankenheimer took the assignment with brio; even at 133 minutes, there’s scarcely a second of The Train that doesn’t move it forward on the tracks. Lancaster plays Labiche, a railway inspector with ties to the Resistance who’s trying to survive the last days of Nazi occupation in Paris. With the Allied forces closing in on the city, German officer Colonel Franz von Waldheim (Paul Scofield) hatches a plan to cherry-pick masterpieces from the Jeu de Palme museum—Renoirs, Cezannes, Van Goghs, Picassos, the works—and load them on a train to Germany, essentially looting France of its cultural heritage. After hearing the pleas of the museum’s curator, Labiche and his men do everything they can to sabotage the train without damaging the cargo, which takes a lot of creativity, bravery, and luck.

Though The Train is a marvel of old-fashioned action craft, from invisible dolly shots of breathtaking sophistication to the careful staging of massive railway catastrophes, it’s not a thoughtless adventure by any means. There’s an irony in the cat-and-mouse relationship between Labiche and von Waldheim: Despite selling the urgency of his plan to superiors by stressing the billion in war funds that could be generated by “degenerate art,” von Waldheim is a true aesthete with a curator’s eye for value; Labiche couldn’t care less about art, but has enough passion for France and for thwarting the Nazis that he’s willing to protect the art at the cost of his own life, even as the war is drawing to a close. Both men treat the art as precious cargo, but for very different reasons. And in Labiche’s relationship with Christine, played beautifully by Jeanne Moreau, the film delves deeper into the reluctant heroism of everyday French citizens, when it would have been safer to mind their own business and wait for liberation.

When The Train came out, Frankenheimer was in the middle of a peerless run in the 1960s—The Manchurian Candidate and Seven Days In May preceded it, Seconds and Grand Prix followed it—and what remains striking about the film is how it’s simultaneously stripped-down and gigantic. Frankenheimer was reportedly saddled with a very long script, and The Train is a lesson in focusing on the most essential, forward-moving elements and throwing everything else away. That’s not to say that Frankenheimer betrays the more character-driven piece Penn had envisioned, but he proceeds with the belief that action reveals character. Von Waldheim is and isn’t the pitiless, soulless Nazi officer he appears to be; Labiche is and isn’t as simple in his rebellious instincts as he appears to be. The Train has plenty of things to say about these characters—and about the character of the Nazis and the Resistance—but it doesn’t pause for long to say it. There’s a job to do.

KL Studio Classics’ reissued DVD includes commentary by Frankenheimer, who was a master of the form. After making an introduction, Frankenheimer notes that the first establishing shot was done on a freezing-cold night—the same night he got married. From there, it’s off to the races. His commentary style is very scene-specific, with larger details about the production sprinkled in along the way, but he has an excellent memory. He shot The Train about three decades before recording this commentary track, but he remembers the shoot like it was yesterday. The theatrical trailer rounds out the supplements.