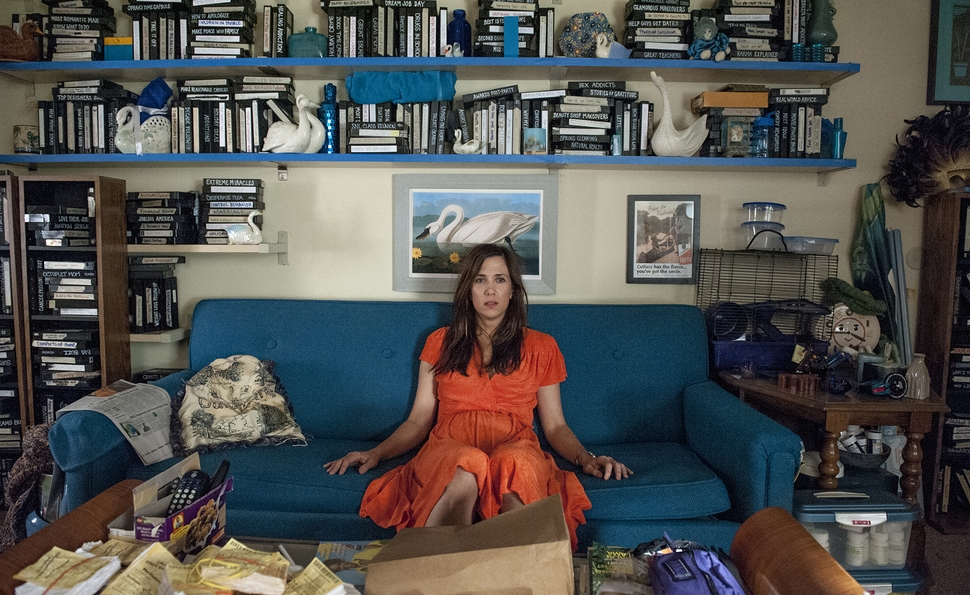 As Welcome To Me opens, it appears as if Alice Klieg (Kristen Wiig) has simply fallen asleep with the television on. How else to explain why anyone would watch an ad for Perfect Polly, an actual product that promises all the pleasures of a live parakeet without the mess. Then it becomes clear that Alice, when home, always basks in the glow of a TV and has, we learn later, for 11 years. She’s an odd woman, prone to approaching strangers and asking them if there’s a rape in A Tale Of Two Cities and other befuddling questions. Diagnostically speaking she has, in the view of her shrink (Tim Robbins), borderline-personality disorder, a condition not helped by her decision to quit taking her meds in favor of a high-protein diet. She’s the sort of marginal character most people keep at a distance, and those who don’t view as something of an obligation. “You don’t have to stay,” the husband of Alice’s friend Gina (Linda Cardellini) tells her when Gina talks to him on the phone from Alice’s house. “Someone has to stay,” she replies, knowing that without her help, Alice would have no one. Then Alice wins a multi-million dollar lottery jackpot, and everything changes.

Directed by Shira Piven and written by Eliot Laurence, who studied improv under the director, Welcome To Me then follows Alice to the edges of sanity. Deciding to apply her money to something she loves, Alice hooks up with a struggling infomercial operation run by Rich (James Marsden) and his brother Gabe (Wes Bentley), the latter a face familiar to Alice and other late-night viewers thanks to programs he hosts touting the benefits of algae and other dietary wonders. Using Oprah as her role model, Alice launches Welcome To Me, a talk show dedicated to her life and thoughts. After she won big, the lottery commission cut off her prepared statement when she hit the line, “I’ve been using masturbation as a sedative since 1991.” But with her own show, Alice can just keep going (and going and going), despite the misgivings of producers played by Joan Cusack and Jennifer Jason Leigh, and, ultimately, Gabe, with whom Alice begins an unexpected romance.

There are a number of obvious directions Welcome To Me could take this material, and part of what makes it so refreshing, and insightful, is that it takes none of them. Instead of scoring tired points about the banality of television or the ways the 21st century encourages narcissism or the way money changes people, the film focuses on Alice, and the longer it spends with her, the less freakish she seems. As the show progresses and adds segments like “I Can Still Smell You” and “Lucky Foods,” it picks up viewers as interested in Alice as she is herself, perhaps because they see more than a little of themselves in the way she can’t let go of the past. In some of the film’s best scenes, which edge over into the casual surrealism of Charlie Kaufman or Tim And Eric, Alice oversees reenactments of traumatic past events, most memorably a time in 1991 when someone “tampered” with her make-up bag.

Alice stages the event as a soul-tearing psychodrama, which is both absurd and truthful to a character unable to process the past and move on, or understand the present without the filter of television. It’s a role that plays to Wiig’s strengths as a both a comedic and dramatic actress. On stage, performing her life for the camera after riding onto the set on the back of a giant swan, Alice looks like a character Wiig might have created on Saturday Night Live. But the movie stays with her, allowing her to develop shading and dimension as it becomes clear that the situation could tilt toward tragedy without much of a push. There will be few creepier images to make it to the screen this year than Wiig mouthing along to an episode of Oprah she’s committed to memory.

Welcome To Me never develops much momentum, doesn’t always know what to do with supporting players like Leigh, and builds toward a finale that plays as a bit too neat. Yet even this doesn’t betray the character’s cracked integrity. Welcome To Me is more defined by an abundance of memorable moments that pose fascinating questions about the nature of what Alice is up to and how others respond to her, as when an enthusiastic grad student (Thomas Mann) drawn to what he calls her “narrative infomercial” struggles to find common ground by sharing a Cindy Sherman book with her—only to realize she not only has never heard of Sherman, she doesn’t have any distance from what she’s doing, much less any conception of it as art. Alice almost lacks the self-awareness to be called a narcissist. It’s all a big show and it’s all her show as she struggles to be the best, happiest version of herself she can be. Guests should come forewarned that their time on the stage might be limited.