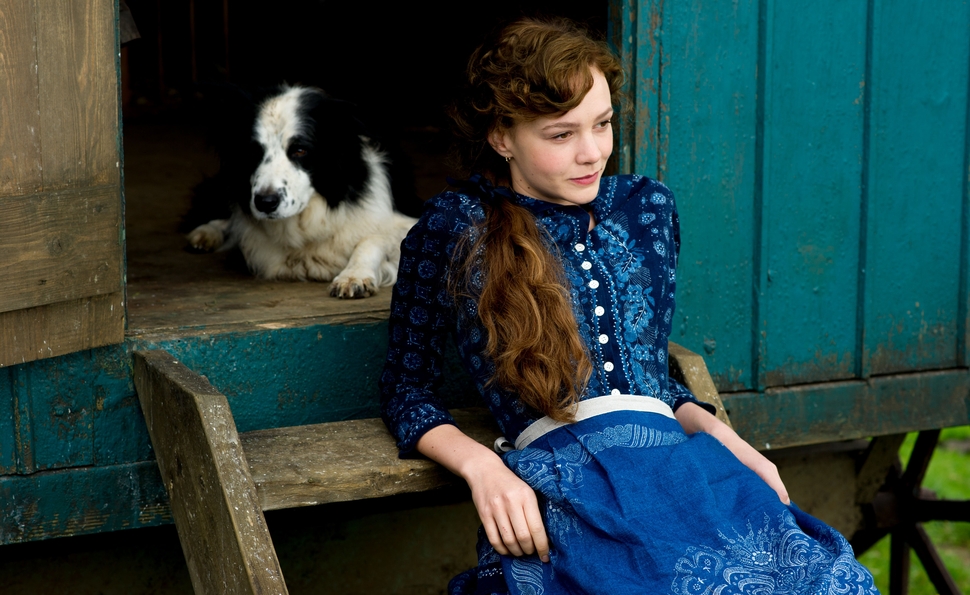 Far From The Madding Crowd

Incredible as it may seem today, Thomas Hardy was frequently accused of misogyny during his lifetime. Not that Victorians necessarily threw that particular word around, but there was a general feeling that Hardy treated his female protagonists cruelly, in part because he seemed staunchly opposed to letting them find happiness in marriage. For contemporary readers, on the other hand, Hardy comes across as a proto-feminist, enamored of women who refuse to be shackled by societal convention. The Return Of The Native’s Eustacia Vye is the gold standard in this respect, but Bathsheba Everdene, the heroine of Far From The Madding Crowd, is no demure doormat, either. Thomas Vinterberg’s fine new adaptation of Madding Crowd, starring Carey Mulligan, celebrates Bathsheba’s independence as fervently as Beyoncé could wish. “It’s a bunch of emasculated men chasing after a woman who doesn’t want any of them,” complained one man after a press screening, and while that description is ludicrously inadequate, it’s not inaccurate.

Written by David Nicholls (Starter For 10), this version—the first made for the big screen since John Schlesinger’s, way back in 1967—restructures the narrative to place Ms. Everdene at its center. As the story begins, she’s a young woman of no special means who catches the eye of a sheep farmer, Gabriel Oak (Matthias Schoenaerts), who lives nearby. When Gabriel proposes marriage, however, Bathsheba gently declines, saying she has no use for a husband. A subsequent reversal of fortune—Bathsheba inherits a fortune; Gabriel loses his entire flock—further alters the dynamic between them, as Gabriel ends up in Bathsheba’s employ. Meanwhile, she’s courted by a wealthy, middle-aged gentleman farmer, William Boldwood (Michael Sheen), in whom she has no romantic interest, and also by a dashing young soldier, Sergeant Troy (Tom Sturridge), who makes her quiver even though his heart actually belongs to one of Bathsheba’s former servants, Fanny Robin (Juno Temple). There’s a secret wedding, a murder, a person presumed dead who dramatically returns, a pauper’s grave, and numerous other juicy classic-lit staples.

Hardy’s novel tells this story through all five of those characters, with roughly equal stature accorded to each. There’s no way to accomplish that kind of depth in a two-hour adaptation (the 1967 film ran three hours), so Nicholls pares things down considerably, reducing Fanny in particular almost to a cameo. As a cinematic condensation, it mostly works, even if the pace sometimes feels a bit frantic. Vinterberg shoots simply, prioritizing performances over the merely picturesque, though he lets some handheld Dogme-style jitteriness intrude during moments of great agitation. He also nails the famous scene in which Sergeant Troy woos Bathsheba with a demonstration of swordplay as foreplay, passing his allegedly dull blade repeatedly within centimeters of her body before revealing that he could have flayed her alive. It’s the movie’s one display of dazzling showmanship, each cut as perfectly judged as Sergeant Troy’s thrusts; when Bathsheba practically has an orgasm while standing there being almost-filleted, it’s very clear why.

Equal credit for that triumph—and for the film’s success in general—belongs to Mulligan, whose interpretation of Bathsheba is thrillingly unorthodox. Rather than project the sort of natural, unwitting charisma that would justify the attention of every man she meets, Mulligan conveys a bottomless reserve of plainspoken self-possession. Not only does this Bathsheba have no need for a husband, she has no need for anyone at all (at least until her sheep start dying of bloat—spurring Gabriel to the rescue), though that doesn’t make her invulnerable to being seduced by meretricious adulation. It’s precisely her all-business manner that makes her sudden surrender, which sets multiple tragic wheels in motion, so intensely moving; it’s like watching a dam burst, but without any suggestion that Bathsheba had been repressing anything. (Sheen pulls off a more muted version of the same effect with Boldwood.) This reconception requires Nicholls to slightly revise a crucial plot point involving a prank valentine, and it makes the ending—one of Hardy’s few happy endings—less than convincing. But it’s refreshing to see a prestige costume drama so interested in its heroine that it that treats “happily ever after” as an afterthought.