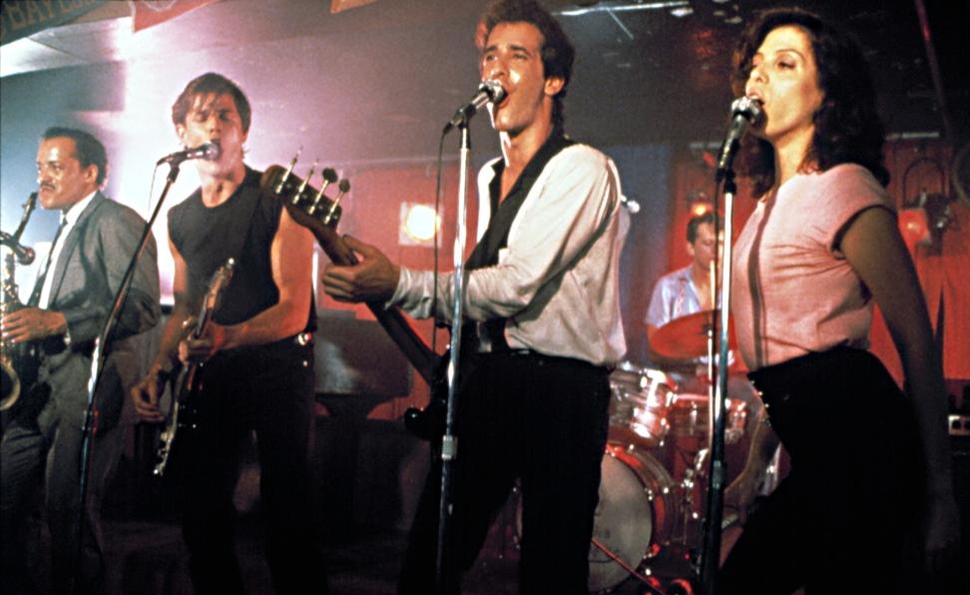 If not for pay-cable and an obscure Rhode Island bar-band, the 1983 musical drama Eddie And The Cruisers probably would’ve sunk into obscurity—which might’ve been justified, given how bonkers the project was in the first place. Adapted by writer-director Martin Davidson from P.F. Kluge’s novel of the same name, Eddie And The Cruisers aimed to be nothing less than a rock ’n’ roll Citizen Kane, following a reporter, Maggie Foley (played by Ellen Barkin) as she researches the legend of long-dead 1960s rocker Eddie Wilson (Michael Paré). Maggie’s interest inspires old Wilson bandmate Frank Ridgeway (Tom Berenger) to do his own digging into two enduring mysteries: Did Eddie fake his own death? And what happened to the tapes for the experimental album he’d been recording? Eddie And The Cruisers is a hodgepodge of seemingly unmarketable ingredients: a complicated flashback structure, oblique nods to Elvis Presley conspiracy theories and The Beach Boys’ unreleased opus Smile, and anachronistic Bruce Springsteen-style frat-rock.

As it turned out, the latter saved the day. Around the same time that the movie was released, Billy Joel’s oldies homage An Innocent Man became a hit, and the following summer, Springsteen himself released his most popular album, Born In The U.S.A. Though Eddie And The Cruisers flopped in theaters, it started airing on HBO around the same time that Top 40 radio couldn’t get enough of retro pop and heartland rock. Soon, the John Cafferty & The Beaver Brown Band soundtrack started climbing the charts, led by the surprise Top 10 hit “On The Dark Side.”

Aside from Eddie And The Cruisers’ funky structure, the music remains its chief selling point—though Cafferty’s songs don’t plausibly pass for early 1960s tunes. Springsteen’s music was inspired by that era, but it was also decidedly post-Bob Dylan, and more 1970s FM than 1960s AM, so Cafferty’s copies also sound like products of 1983, in both the production and the attitude. Nevertheless, “On The Dark Side” is a catchy number, as is the ballad “Tender Years.” They help prop up a corny showbiz melodrama that’s entertainingly strange and silly.

Davidson, taking his cues from Kluge, set out to say something meaningful about rock’s evolution, and how musical inspiration can strike anybody, regardless of social station or formal training. But the movie gets hung up on the insecurities of the lower-class Eddie, and it features one scene after another of the hero trying to determine whether if anybody in any given room thinks they’re “better” than him. Yet even with the flat dialogue, the weak conflict, and the sucking sub-Travolta void that is Paré, Eddie And The Cruisers remains as captivating now as it was to HBO subscribers and video-store customers back in the mid-1980s. That’s largely because there’s inherent appeal to the film’s mystery, as well as to its fantasy of The Great Lost Album (Unfortunately, the snippet the audience hears of that album, A Season In Hell, sounds like turgid 1980s Adult Contemporary with a few arty sound effects overlaid.)

The belated 1989 sequel Eddie And The Cruisers II: Eddie Lives! is even clunkier, and still more fun than it has a right to be. In the original, everybody assumes Eddie Wilson died when he drove his car off a bridge, but what the sequel presupposes is… maybe he didn’t? Annoyed that the Cruisers’ 1980s revival has led to greedy record executives releasing music he never finished, a mustachioed, incognito Eddie—again badly played by Paré—joins with a young Montreal band and sets about proving to a new generation what rock ’n’ roll is all about. Eddie Lives! allows fans of the first film to find out what an older Wilson’s music would sound like (more Georgia Satellites than Springsteen) and how he’d behave in his middle age (still pretty snippy). It’s mostly a series of campy scenes of Eddie berating folks: his new lead guitarist for preferring flashy metal guitar solos; a snooty gallery owner for not recognizing the genius of his girlfriend’s representational paintings; himself for being haunted by the drug overdose of the Cruisers’ old sax player; and so on.

It’s hard to pin down exactly about the music-making elements of these movies makes them more enjoyable—though it’s not unique to the Eddies. Better films like Grace Of My Heart and That Thing You Do! offer the same kind of kick, as do the similarly middling movies Dreamgirls and The Idolmaker. Maybe it’s that they’re all musical biopics of musicians who never existed, which means they can present a version of popular culture that’s like fans want it to be, unbound by dull facts. The actual act of creation is mysterious, and mostly internal. It’s far more exciting to watch a dweeby pianist played by Berenger haltingly plunk out the chords and words of “On The Dark Side,” to the derision of his bandmates, only to have the cocky Eddie swoop in and turn it into a hit song. Every bit of pop ephemera should have such a glorious origin story.