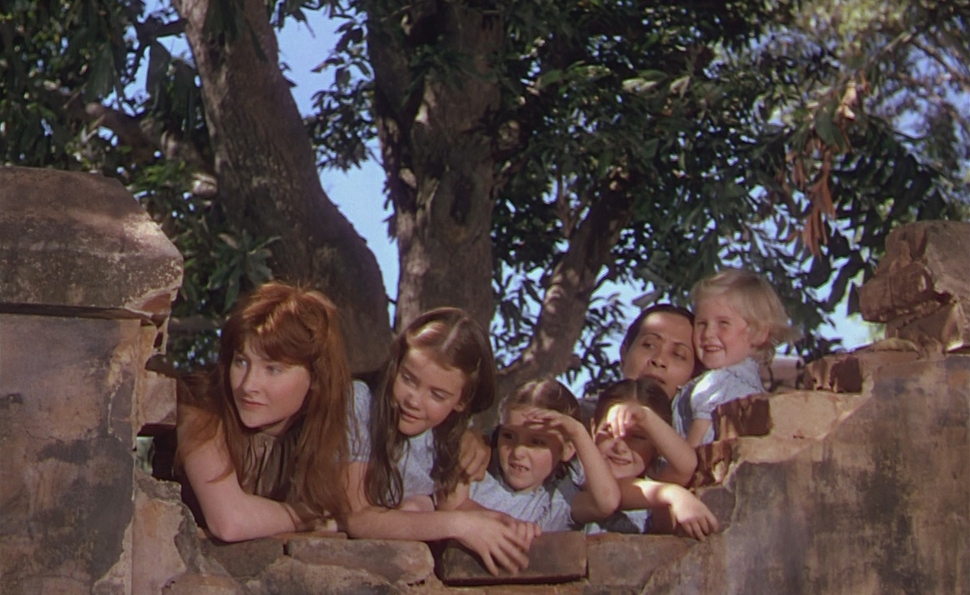 “A movie set in India must contain certain essential elements,” Jean Renoir recalls Hollywood producers telling him when he tried to sell them on The River. “You need tigers, Bengal lancers, and elephants.” The River, released in 1951, has none of the above. Adapting a novel by English author Rumer Godden, who also co-scripted, Renoir decided to eschew the visions of India that had previously made it to the screen. Instead, he stayed close to the India Godden knew as a girl growing up in the country, and tried to find the universal truths in that particular experience.

Renoir’s first film in color, and his first after that Hollywood phase, The River is simultaneously beautiful and odd. Martin Scorsese ranks it next to The Red Shoes as the most beautiful color film ever made, and it’s easy to see why. It emphasizes Technicolor’s vibrancy, but it’s also notable for the way it accentuates muted tones, like the clay bricks and the sand by the riverbanks. It’s also awkward at times: Though Renoir doesn’t overplay the exoticism, it’s very much an outsider’s film about the experience of Europeans in India. (Another perspective was to come. Satyajit Ray, though yet to pick up a camera, sought out Renoir and met him during filming.) The cast is a curious mix of professional actors, non-professionals, and children who don’t seem to be acting at all. Yet it all blends together remarkably well, and the film’s ability to incorporate so many seemingly disparate elements into its story matches its broad vision.

Patricia Walters (in her sole film credit) plays Harriet, whose adult voice, provided by June Hillman, supplies the narration. She lives on an estate near the family’s jute mill with her father (Esmond Knight), mother (Nora Swinburne), five sisters, and a brother named Bogey (Richard R. Foster). Another family, the Johns, lives nearby, and when their handsome American cousin Captain John—a veteran of World War II, which took his leg—arrives for a visit, Harriet, her older friend Valerie (Adrienne Corri), and Melanie (Radha), the family’s marriage-aged, mixed-race daughter, all start to vie for his attention. Nothing much comes of this in terms of dramatic incident, at least not of the sort on which traditional plots usually get built. But it lets Renoir portray romance and heartbreak as part of life’s natural progression against a backdrop that includes a celebration of Diwali, the changing seasons, and in one heartbreaking passage, an unexpected death.

There’s scarcely a non-stunning frame in the film, yet Renoir never pushes too hard for effect. One sequence dissolves from one figure napping in the afternoon to the next without offering further commentary. In another, two boys explore a wooded area filled with danger, yet Renoir never makes it look especially foreboding. The beauty is there alongside the danger. That’s just the way of things, and Renoir keeps finding simple, unadorned ways to present the profound. There’s a story here, with a beginning, middle and end. But it takes the form of discrete vignettes that have their moment, then pass. Renoir fades in and out between scenes as the voiceover offers a lyrical take on what we’ve just seen, and what it means. This happens, the movie suggests, and then this happens, just as it’s always done along the Ganges, and all over the world.

Jean Renoir supplies a vintage introduction, while Scorsese, who pushed to have the film restored, supplies one from 2004. The other features all provide various perspectives on the film’s production, including the hourlong 2008 documentary Around The River and a 2000 interview with producer Kenneth McEldowney, a florist whose love of India helped make the film possible.