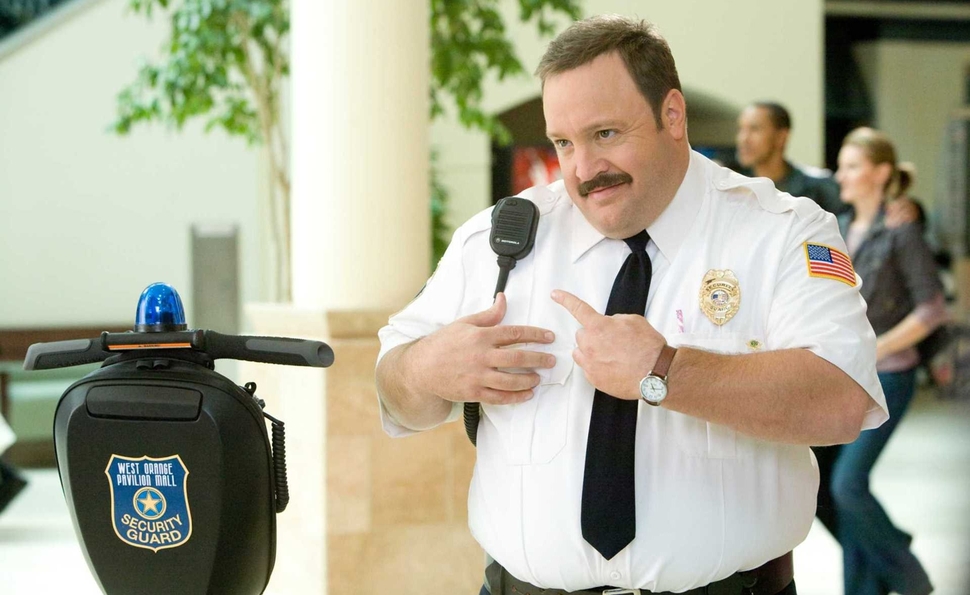 The 2009 sleeper hit Paul Blart: Mall Cop was the Happy Madison version of Paddy Chayefsky’s Marty. Both are fundamentally sad movies about average men looking to improve their miserable lives. And Paul Blart had the perfect lead for such working-class schmaltz in Kevin James, who has Ernest Borgnine’s bowling-ball physique and some of his innate weakness—though not Borgnine’s gift—for pathos.

Paul Blart: Mall Cop spends its first half establishing its humorously named protagonist as the world’s saddest sadsack before affording him the chance to live out his John McClane fantasies once his mall is invaded by a high-tech gang. There’s a germ of a good idea here: Die Hard reimagined with a fat, mustached schlub at its center instead of a cop turned lone warrior. At its best, it suggests a family-friendly version of Blue Ruin, which similarly put an inept everyman on a quest for justice. Yet that promise went unfulfilled in the same gooey combination of oafish slapstick and sticky sentimentality that’s become Happy Madison’s stock-in-trade.

But James is a very different performer than Adam Sandler, his frequent co-star. Where Sandler seems pained to have to suffer through the 5 percent of his movies that are sincere, James gravitates toward the painfully earnest. It’s where he appears to feel most comfortable, to the point where the first film and its belated sequel, Paul Blart: Mall Cop 2, is largely devoid of jokes outside of physical slapstick.

Now, six years after James delivered the infinitely lesser of 2009’s mall-cop movies—the better being the appealingly insane Observe & Report—the mustached gent with the comical name and smooth Segway moves is back in action. Paul Blart: Mall Cop 2 takes a page from the Think Like A Man Too playbook by moving its sequel to Las Vegas, and a page from seemingly every other bad sequel by essentially remaking the original.

The first film, do recall, ended on a note of triumph, with the heavyweight rent-a-cop rising to the occasion and stopping a daring robbery. He goes from zero to hero in the process. Well, Paul Blart: Mall Cop 2 wastes no time knocking Blart back down to zero. His gorgeous wife has left him after six days, and his beloved, doting mother was fatally hit by a milk truck, a death that’s played for a glib laugh. Good news arrives, however, when Blart is invited to a security-officer convention in Vegas and Blart’s teenage daughter is accepted to UCLA, although she’s too scared of her father’s reaction to actually tell him, for fear it might fracture their tight-knit bond. James tries to overcompensate for the humble nature of his position by constantly acting like the big shot and posturing like a real cop, which makes him both a loser and a bit of a jerk—a winning combination for any screen hero.

Just as in the original, this film is evenly divided between a first half establishing its protagonist as a pathetic little man who thinks he’s a big dog, and a second half where he’s called upon to thwart a high-tech robbery conducted by a gang of art thieves led by the sneering Vincent (Neal McDonough). And though the whole appeal of shooting in Las Vegas is the glittering casinos, Paul Blart: Mall Cop 2 manages to get its protagonist back in his natural habitat of a mall, which could hardly be less cinematic.

One of the film’s central subplots involves Blart thinking he’s going to be giving the keynote speech at the convention after a fellow attendee hints a keynote address is in his future. This suggests that keynote speeches at conventions are hastily improvised spiels from speakers chosen moments before they’re supposed to deliver oratory to a large group of people, and not assignments delivered months in advance to give the speaker time to prepare. But it seems petty to complain about such a plot hole when nothing here works, and it fails in the exact same way the last one did. At last give James marks for dependability.

In the past, James at least had likability on his side. He was a big, lumbering oaf, the ideal drinking buddy. But there’s an arrogance to the way he treats people here, particularly a gorgeous hotel employee he’s convinced is in love with him, that renders him strangely unsympathetic. With Paul Blart: Mall Cop 2, James has made the same joyless, laugh-free comedy twice, albeit this time in a more fun location. Perhaps he’ll finally sort it out by the time he shoots the final entry in the Paul Blart: Mall Cop trilogy, 2021’s Paul Blart: Mall Cop 3.