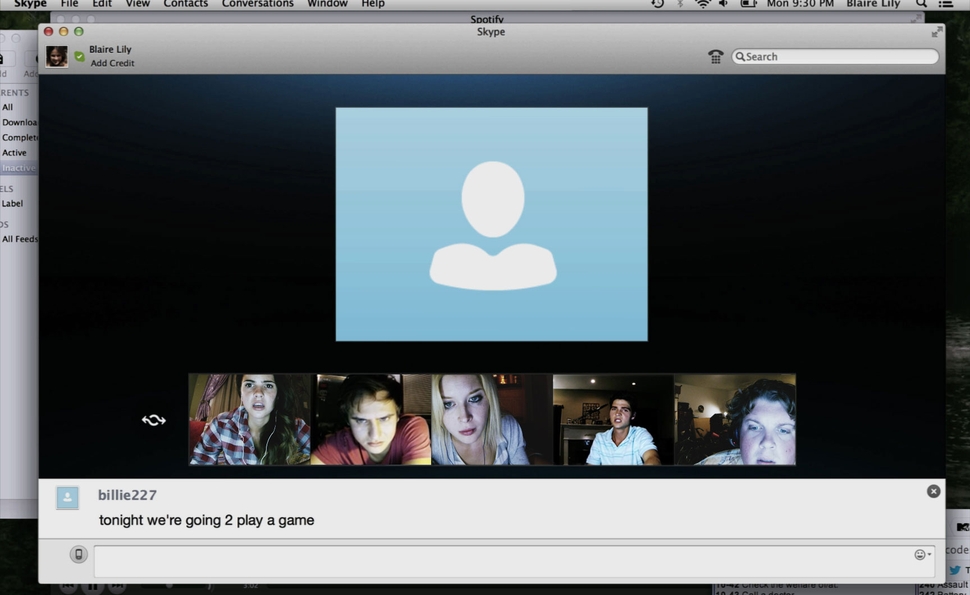 Technology isn’t always a friend to horror. Just consider the narrative loop-de-loops many contemporary horror films have to go through to establish that their characters’ phones won’t save them in that old abandoned mine shaft/rickety cabin/particular part of town. Some horror films have kept up with the times: For better or worse, we wouldn’t have so many found-footage movies if we didn’t live in a culture where it’s now possible to record every action at all times. Yet the default response for many horror filmmakers has been to port old monsters into new machines, as with all those scary old ghosts that slipped in through VHS tapes or cell phones during the heyday of J-horror. The inventive new horror film Unfriended doesn’t do that. Instead, it looks just beneath the surface of today’s technology and discovers a place crawling with terrors all its own.

Directed by Levan Gabriadze from a script by Nelson Greaves, Unfriended commits to totally immersing viewers in the online experience, starting with the Universal logo, which starts to break down into pixelated images and distorted noise like a bad stream or a corrupted torrent file. It taps into the way many of us experience technology every day: as an element that should make life easier, but contains the potential for chaos, or worse, whenever it threatens to break down. From there, the story shifts to the laptop screen of a Fresno high schooler named Blaire (Shelley Hennig), who knows she ought to be studying for tomorrow’s test, but keeps getting distracted. And that’s where the camera stays planted for the rest of the film. This would play as a gimmick if Unfriended didn’t make clever, occasionally ingenious use of the pile-up of windows within windows, some filled with urgent text messages, some with talking (and occasionally screaming) heads, some just playing songs on Spotify.

As the film opens, it’s some extreme content on LiveLeak that has her attention, namely year-old footage of her friend Laura (Heather Sossaman) committing suicide after she was widely taunted when embarrassing footage of her getting sloppy drunk at a party appeared online. (Cyberbullying and teen suicide don’t necessarily make for the most tasteful horror movie premises. But then again, the genre hasn’t ever been powered by good taste.) She’s interrupted when her boyfriend Mitch (Moses Jacob Storm) tries to take a Skype conversation in a sexy direction. That virtual make-out session is also interrupted when their friends barge in via their own laptops, making it a group chat. That is, their friends plus an anonymous stranger with a blanked-out screen, who uses the text screen to taunt the teens before escalating the session with threats, embarrassing photos, and worse. Meanwhile, over on Facebook, someone using Laura’s account has struck up a none-too-civil conversation with Blaire.

The film uses real services, from YouTube to Chatroulette, which lends it an added layer of believability. Unfriended gets a lot more shivers out of the default, no-photo-added-yet Skype icon than anyone could have expected. (Maybe in the sequel, a Twitter account with an egg icon can do some of the menacing.) So does its naturalistic approach to online communication. Characters talk over each other, drift in and out of frame, make typos, and revise what they’ve written before sending. Some of the movie’s eeriest moments come less from scares than from the everyday ghosting of images, and the way Gabriadze lets one open window hide what’s happening in the windows underneath it. Often it’s nothing of consequence, much less anything scary, but the setup emphasizes how trying to multi-task always means missing out on something, and that something might be dangerous. The only formal concessions Unfriended makes to being a movie come from the way it lets some background conversations fade back into the mix, and the occasional ominous bit of score music.

Yet for everything here that’s new and exciting, there’s much that’s way too familiar. The kids are so one-dimensional and unpleasant, it’s hard to care once they start dying off. And lines like, “I’m gonna go check it out” double as death sentences, as they always do. Unfriended is often more innovative than scary, too, with some memorable but not particularly chilling and hilariously foreshadowed death scenes. (Kids, if you’re being menaced by the spirit of a dead friend online, take the dangerous household appliances into a different room.) The innovation goes a long way, though, as does a wicked sense of humor that sends Blaire following a search trail to message boards offering advice about what to do when you get a message from the dead. Typical of the Internet, the advice turns out to be pretty lousy. Sometimes it’s the way technology falls short that makes it scary.