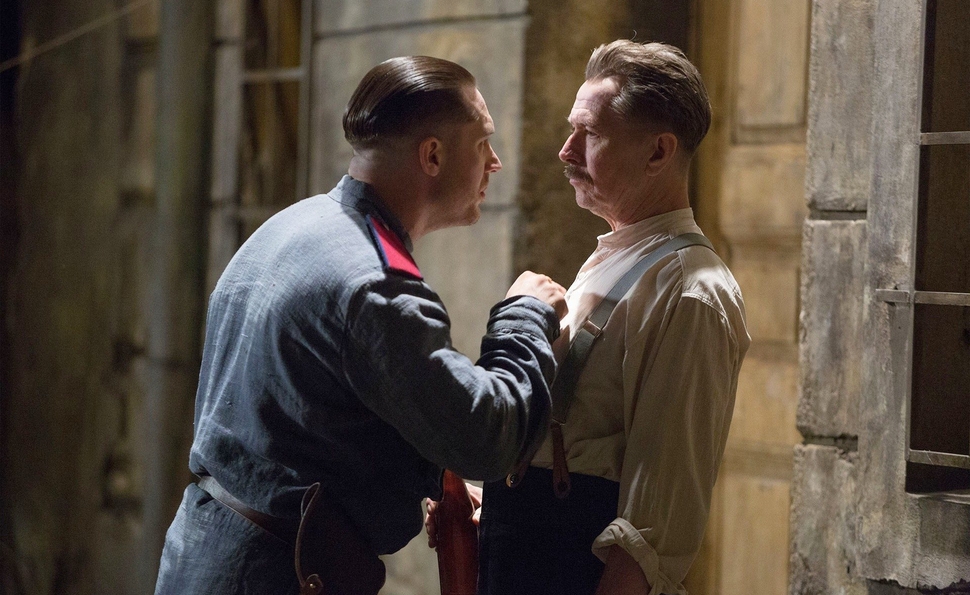 From 1978 to 1990, Russian serial killer Andrei Chikatilo murdered and mutilated at least 52 women and children, for which he was executed in 1994. Tom Rob Smith’s 2008 novel Child 44 took this spree as the inspiration for a heavily fictionalized version set in 1953, pointedly grounded in the peak-terror moments before and after Stalin’s death. Daniel Espinosa’s unwieldy, sometimes unintentionally funny film adaptation nails the gloomy period production design of a perpetually gray empire, but otherwise, it’s a wash, starting with a Europudding assemblage of performers of all nationalities besides Russian.

As Moscow-based agent MGB (the KGB’s predecessor) agent Leo Demidov, Tom Hardy struggles even more with his Russian accent than he did with Bane’s mask: His voice is pitched somewhere between Carlito’s Way-era Al Pacino, and Boris Badenov. After Leo incurs the enmity of fellow officer Vasili Nikitin (Joel Kinnaman), his wife Raisa (Noomi Rapace) is falsely denounced as a spy, and the couple is shipped off to the outskirts of Rostov. This might be enough plot for one film, but the real through-line is a series of child murders, which Demidov first encounters in Moscow. The existence of homicide is dismissed as even an outside possibility by his superiors—per Stalin, murder can only be the disease of a capitalist society, and the corpses are written off as train accidents—but when more dead children pop up in Rostov, Demidov won’t let the case go.

Given the historical scope of its setting and its factual basis, Child 44 might, sight unseen, beg comparison to Zodiac or Memories Of Murder. At its core, though, Child 44 is a boilerplate story about a brilliant rogue police officer who won’t play by the rules, is framed by corrupt superiors, and ultimately vindicated—the domain of routine television procedural, rendered here with little inspiration. Jon Ekstrand’s by-the-numbers score has pounding timpani to accompany putatively exciting/dramatic scenes, and mournful violin solos when a child is killed. That attempt to underline sadness typifies the overall approach. Espinosa seems most comfortable in scenes emphasized by punched-up gunshots, but displays little real flair for action; he renders a big train-car brawl utterly incoherent. Besides letting his actors embarrass themselves in a variety of ways, his other main contribution is an endless series of helicopter shots of industrial chimneys and buildings twinkling in the night, regularly reminding us that we’re still in a depressing setting.

The killer—seen early from below the waist, and head-on halfway through—is sketchily characterized as a kind of Thomas Harris reject in the “Buffalo Bill” vein; in one inexplicable scene, he effectively waterboards himself, shouting that it’s in honor of Stalin. The dictator’s picture is everywhere; he’s the ultimate murderous father in a society whose children are being routinely killed. But there’s little sense that anyone involved has more than a passing familiarity with the Stalin era. The screenplay is by Richard Price, an ace crime novelist. But Child 44 has little of the specificity or sense of being lived-in (or at least heavily researched) as, say, Price’s Clockers. Indeed, the dialogue tends toward the goofy or generic, complete with a “We are both killers, you and I” moment between murderer and hero. There’s no actual moral ambiguity here, though, just a case to solve, with the dialogue helpfully labeling Vasili as “a monster” and Leo as “not a monster” in case anyone gets confused.

Everyone overacts, leaning heavily on moments of unexpected shouting, with Hardy taking bottom honors: Whether busily cracking a hard-boiled egg on the kitchen table during dinner, or holding up a silver salver during a conversation with his wife, he relies on eccentric prop usage to fill moments not powered by sheer voice volume. The screenplay’s most interesting fillip is that Raisa married him for fear, not love: She couldn’t imagine what might happen if she rejected an MGB agent, a possibility that never occurred to Leo. He needs to check his state-conferred privilege, which he’s subsequently forced to do, and the movie makes the banal suggestion that nothing brings a struggling couple together like a bit of government persecution. While it’s not necessarily criminal to use a historically tragic setting as the backdrop for a routine crime case, it’s unnerving that the film ends up feeling like a long pilot for a series about the Moscow homicide department. Which is exactly what it hypothetically could be: Demidov is the hero of three novels to date. Audiences may have to wait a while before that second installment.