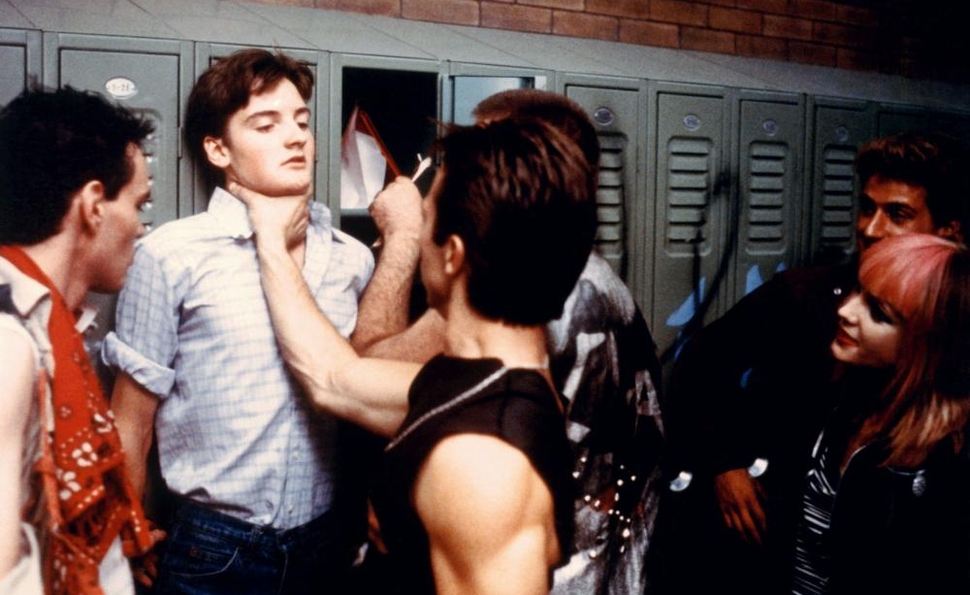 The word “prescient” gets thrown around a lot on the new Blu-ray edition of Mark Lester’s ripe exploitation movie Class Of 1984, both on the packaging and on the special features, where Lester himself points to a marked increase in school violence lately. But calling Class Of 1984 prescient is like calling The Day After Tomorrow prescient due to the winter snowstorms in Boston. A grotesquely overblown thriller about school violence does not become an essential social document for explaining Columbine. Still, the film’s lurid appeals are tied into the delusion that it’s full of truth writ large: Much like Death Wish III, another mid-’80s fantasy about inner-city punks squaring off against a middle-aged avenger, the film has aged into a benignly reactionary statement that’s too extreme to be taken seriously. It can be enjoyed—substantially enjoyed—as a fantasy that purports to be a social document, but reflects the assumption of its creators more than anything that could be recognized as reality.

Arriving at graffiti-strewn Lincoln High School for his first day, Andrew Norris (Perry King) is an idealistic music teacher who’s informed before he enters the building that teaching will be a secondary concern. There are some good students at Lincoln—hello, pre-Family Ties Michael J. Fox—but the kids and the faculty are both under the sway of the switchblade-wielding thugs who actually run the place. (The metal detectors and surveillance cameras around the school are ineffectual at best.) Led by Peter Stegman (Timothy Van Patten, who went on to direct episodes of HBO shows from The Sopranos and The Wire to Game Of Thrones), an upper-class piano prodigy gone bad, the gang runs a full-blown crime ring out of the school, selling heroin and other drugs, and running a prostitution racket, too. Despite the risks of standing up to Stegman and his gang, Norris coaches the good kids into prepping for a musical performance, and takes on the bad kids any way he can. Both goals come to a head in a climactic concert turned behind-the-scenes bloodbath.

Class Of 1984 anticipated Lean On Me, The Substitute, and a spate of other high-school thrillers and docudramas that advocated a fight-fire-with-fire approach to teen violence, but it’s vastly more entertaining. Norris is the ostensible hero, but as the ugliness escalates—there are at least two explosions, and a gang rape of nauseating length—he becomes as deranged as the punks he’s trying to silence. (In one great fit of retributive anger, he stomps into a parking deck, hot-wires Stegman’s red convertible, and smashes the back and front repeatedly into a wall.) Roddy McDowall is on hand, too, as a handgun-packing history teacher who’s on the road to a hammy crack-up to end all hammy crack-ups.

There’s no point in decrying the film’s risible politics—no surprise that Stegman’s evil is explained by him having an indulgent single mother—especially when it’s just an enjoyable relic of Reagan-era paranoia and generational hostility. Here’s a movie where a good kid takes his first snort of blow, climbs up a flagpole, and plummets to his death, still wrapped in the red, white, and blue. One possible reaction to this is to tsk-tsk and shake your head over a plainly hysterical depiction of teen drug use from 1982. Another is to laugh at the cartoonish absurdity of it all. The choice throughout Class Of 1984 is clear.

Lester is the biggest presence on the extras here, appearing on a commentary track, an interview, and a making-of featurette. Though he went on to direct many ripe genre pictures, like Firestarter, Commando, and Showdown In Little Tokyo, Lester was heavily invested in Class Of 1984 as an enterprise, and went on to make the 1990 follow-up Class Of 1999. He makes a strong argument on the film’s behalf. The other interviewees are further down the cast list, like Merrie Lynn Ross, who plays Norris’ pregnant wife, and Lisa Langlois and Erin Noble, who play a punk girl and a good girl respectively.