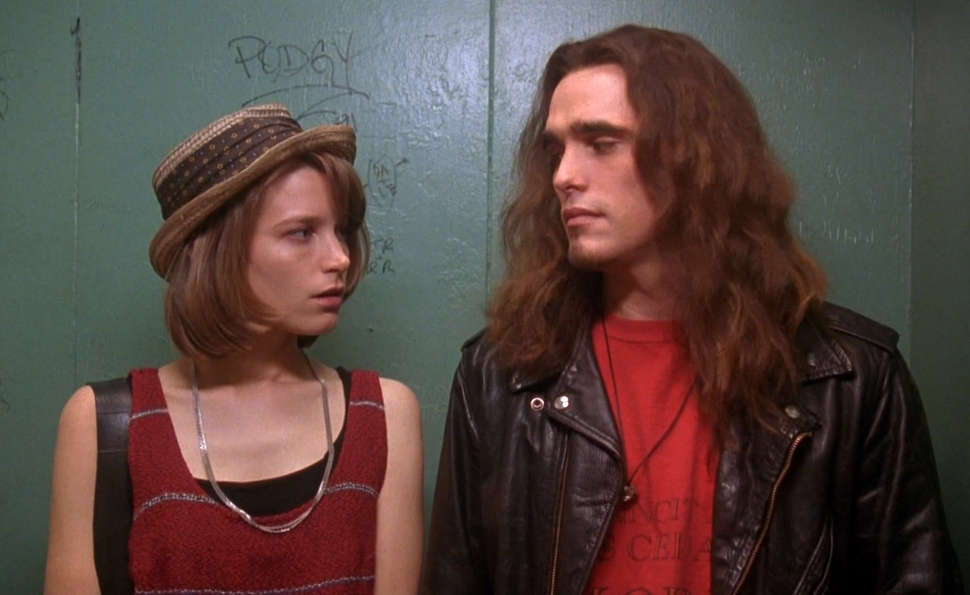 When Cameron Crowe started shooting Singles in Seattle in March 1991, Nirvana hadn’t yet recorded Nevermind. By the time the film was finally released in September 1992, what had been an internationally renowned underground rock scene had exploded into the mainstream, and the buddies Crowe had called on to help him with the Singles soundtrack—including the members of Pearl Jam, Soundgarden, and Alice In Chains—were platinum-level superstars. Meanwhile, in summer 1992, the popular TV soap Melrose Place debuted on Fox, and two years later, the sitcom Friends became a hit for NBC. A trend was developing.

During the process of making and then refining Singles, Crowe heard over and over from his studio bosses at Warner Bros. that he was aiming for a niche that might not be big enough. He wasn’t speaking to the teenagers who’d loved his Fast Times At Ridgemont High and Say Anything…, or the older arthouse crowd inclined to go see a plotless, talky movie about relationships. Instead, he was targeting the kind of hip 20-year-olds more likely to be at a club than at the multiplex. What neither Crowe nor his backers had any way of knowing back in 1991 and 1992 was that American popular culture was about to reorient around young adults just like the ones in Singles.

Singles wasn’t really ahead of its time. If anything, the reason it’s more likable with each passing year is that it’s very much from its time. The film is ostensibly about two Seattle couples and their closest friends, and how they try to advance their careers, forge satisfying relationships, and become actual adults while still clinging to their college habits of hanging out at coffee shops and rock shows. But in 2015, Singles is really about the cordless phone with the expandable antenna, the wristwatch that stores phone numbers, the personal fax machine, the video-dating service, the soul patches, the Mudhoney T-shirt, the “safe sex” party, and the dozens of other products, fashion choices, and pieces of technology that keep the story stuck in 1991. It’s also about some aspects of being young and plugged-in that haven’t changed: hand-stamps at nightclubs, shouting at friends long after a loud concert is over, showing off an awesome record collection to a date, bonding over social activism, and covering apartment walls and corkboards with posters, postcards, and ticket stubs.

Singles did modestly well at the box office, relative to what was a low budget for a studio picture. But it didn’t become a sensation, even though the soundtrack—released three months before the film—was a huge hit. That lack of follow-through can probably be pinned on Crowe, who struggled to wrestle his scattered thoughts on courtship, city life, the emerging grunge scene, and youthful camaraderie into something like a story.

He focuses on four main characters: idealistic urban planner Steve (Campbell Scott); independent-minded environmentalist Linda (Kyra Sedgwick), whom Steve falls for; and would-be rockstar Cliff (Matt Dillon) and peppy design student Janet (Bridget Fonda), who live in Steve’s apartment complex. A few other neighbors and co-workers have significant screen-time, between cameos by Eddie Vedder, Tim Burton, and Crowe himself. But mostly, Singles tracks the on-again/off-again romances of Steve, Linda, Cliff, and Janet, and how they’re affected by juvenile game-playing and a general fear of settling down too soon.

Singles’ main issue is that Crowe wars with himself, sometimes seeming on the verge of making something loose and experimental before retreating to the unconvincingly straight. After some documentary-style footage of ordinary Seattle-dwellers in love during the opening credits, Singles starts with what’s more or less a short film about Linda getting duped by a sleazy lothario, and subsequently swearing off men. From there, it proceeds through what initially looks like a series of similar vignettes, occasionally narrated by the characters in voiceover, or in direct addresses to the camera. Though Crowe is a student of craft, as both a writer and director, his films typically keep cinematic and literary flourishes to a minimum. The same is ultimately true of Singles, which uses chapter-headings throughout, but largely drops the “sketches and short stories” approach in favor of more conventional romantic-dramedy beats.

But while Singles ends up being a mess as a movie, it remains impressive as a Crowe showcase. At the time, he was still proving himself as a filmmaker, with only a couple of produced screenplays and one well-liked directorial debut on his résumé. Singles is like a catalog of everything Crowe had to offer back in the early 1990s, from the detailed evocations of a place and time to the characters’ informed pronouncements about the state of popular culture. There’s even a climactic scene between Steve and Linda that plays like a first draft of the Jerry Maguire ending.

As is so often the case with Crowe, what mostly stands out about Singles is how sensitively and honestly it tries to capture the way people with deep convictions are inevitably headed for heartbreak. There’s real insight into human behavior in the studied casualness that Janet tries to adopt around the aloof Cliff, and in the way Steve tries to pretend he’s not wallowing in depression by plastering on a fake smile and saying, “I’m great! I read half of Exodus!” Crowe’s greatest gift has always been that he can write a scene of a young man on the make insisting, “Tonight I’ll be the super-me,” and a scene of a couple awaiting the results of a pregnancy test, and in both can get at how a veneer of cool thinly masks deeper anxieties. More importantly, he’s savvy enough about the cycles of life to understand how the first scene leads to the second.

In a 1992 Rolling Stone article, Crowe published some of his Singles production diary, and wrote about the torturous process of slicing an hour out of his first rough cut, as the studio tried out different versions of the film—some more glib and funny, some more dramatic—on test audience after test audience. The main extra on the new Warner Bros. Singles Blu-ray is a collection of 25 deleted and/or extended scenes, featuring entire subplots that were lost, and characters who otherwise barely appear. There are no seeds of a better extended cut here, or at least nothing like the excellent “Untitled” version of Crowe’s Almost Famous. Crowe probably ended up with the best Singles he could’ve carved out of his lumpy mass of ideas. But the excised footage does offer a useful glimpse at the process of a writer-director in his early 30s, eager to squeeze all of his accumulated wisdom—and all of his friends—into every open space he could find.