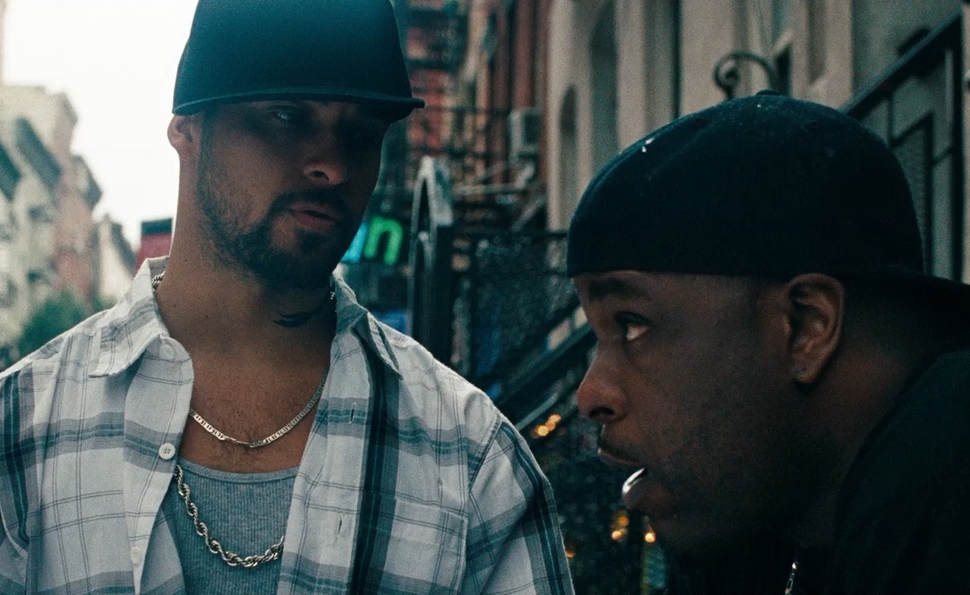 The Girl Is In Trouble

The eponymous “girl” in Julius Onah’s The Girl Is In Trouble is first seen huddled in a dark closet, a narrow band of light illuminating her eyes—a shot straight from the film-noir playbook. Peeking out into the room, she witnesses one man suffocating another, and she captures the entire thing on her cellphone. Director Julius Onah (who co-wrote the script with Mayuran Tiruchelvam) moves the story backward from that moment (and then further back, then forward, then back again), showing how she came to be in that closet, and the byzantine connections at work among a group of people living on Manhattan’s Lower East Side.

While the girl (Alicja Bachleda) is definitely “in trouble,” she is also just flat-out trouble, and any man who tries to help her had best watch his back and check his wallet. Executive-produced by Spike Lee, The Girl Is In Trouble jostles with a kind of energy and freshness that elevates it from its familiar urban-crime-thriller storyline. The film is bold enough to focus on some larger issues having to do with the locale. What is the Lower East Side? What is the neighborhood really like? New York City is not a monolith. It’s a metropolis made up of small, self-sufficient neighborhoods, each with its own past, character, and atmosphere. Onah has something to say about the Lower East Side, and in these moments, The Girl Is In Trouble really shines.

August (played by former Scandal star Columbus Short) is a bartender with dreams of being a famous DJ. When Signe (Bachleda), a Swedish girl he barely knows, calls him in the middle of the night asking to meet up for a drink, he’s baffled. Is it a booty call? He’s even more confused when she shows up at the bar wearing only a man’s trenchcoat and flip-flops.  She needs a place to stay for the night. She turns on the charm. He falls for it. The next morning, she shows him the video on her cellphone. She begs him to help her, tears in her eyes. What’s a big lug to do when a dame cries like that? (If August had seen Out Of The Past or The Postman Always Rings Twice, he’d know to run for the hills.)

August’s voiceover narration introduces multiple characters, all somehow connected to Signe. Each character has a moment of floating down the sidewalk, speaking to the camera about their inner lives, a clear nod to Lee’s signature shot. There’s Angel (a wonderful Wilmer Valderrama), worried that his younger brother Jesus (Kareem Savinon) is dealing drugs; Angel and Jesus’ Spanish-speaking grandmother (Miriam Colon), who does not understand what her grandsons are doing; Nicholas (Jesse Spencer), the rich kid who’s also a drug-dealer, living off of the money from his Wall Street dad’s Ponzi scheme; and Maria (Paz de la Huerta), a street girl who knows Angel and who might know Nicholas. August is drawn deeper and deeper into this web of connections. Unfortunately, the voiceover device is dropped for long periods of time; the film misses having August as its guide.

Short brings an openness and humor to his performance. August has high hopes for himself, and the weight of his parents’ expectations on his shoulders. But the connection between August and Signe feels tepid and uninvolved, at least by comparison with its noir counterparts. August seems irritated with her, for the most part, yet also intrigued by the possibility that maybe he could make a little money if he plays his cards right. Scenes are filmed in realistically tiny New York apartments with a mostly hand-held camera. Some of the scenes could use more structure in order to amp up the tension, but the style is lively and energetic, with title cards inserted throughout (“Three Weeks Before,” “Four Days After,” et al.), underlining the story’s Russian-nesting-doll structure.

The Girl Is In Trouble is most engaging when August makes his observations on the Lower East Side and its immigrant-group striations. August, born in Nigeria, says at one point, “Our parents brought us here for a better future. We were part of something that stretched back to the 19th century.” Onah shows this continuum graphically, almost like a Schoolhouse Rock cartoon, with charts and old photographs, maps, facts, and figures. Onah’s Lower East Side is packed with people who came from other places. August’s friends are documentary film-makers, Fashion Institute students, bartenders, and drug dealers. Drug use crosses class lines, pulling in Wall Street kids with money—which connects everyone. Onah treats this material affectionately, comedically, and confidently. It’s not didactic or preachy. It’s the background noise for all of the characters, the ground on which they walk.

Though the film gets more banal as it reaches its climax—most viewers will have seen it all before—Onah creates refreshing space around these familiar stories and themes. He has a wonderful sense of style and movement, and he isn’t afraid of a story’s personal elements. He goes after them.