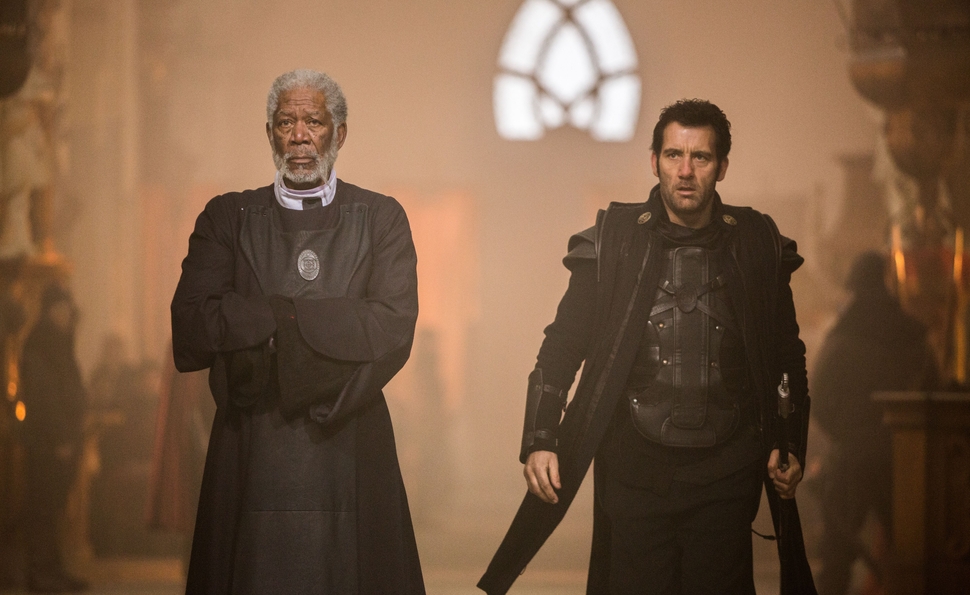 In the forgettable international action drama Last Knights, Clive Owen morosely plays Raiden, a popular character type that at its best is represented by the dashing likes of Rick from Casablanca and Han Solo in the Star Wars movies. Raiden is a true believer who’s learned to mask his passion and idealism behind a world-weary mask of indifference bordering on nihilism. He affects the camouflage of brutal pragmatism because it’s the only way for him to survive. Alas, that makes Raiden sound far more compelling than he actually is. As Owen presents him, with a barely suppressed air of boredom, Last Knights’ hero is a gloomy killjoy, a walking black cloud who’s eventually roused to heroism but seems to spend most of the film skulking.

To be fair, the film gives him plenty to skulk about. The movie opens with Bartok, a mentor played by Morgan Freeman, making a Faustian bargain with an evil, effete emperor in a desperate bid for survival. It doesn’t work, and Bartok is slain, leaving his warriors lost and tragically lacking direction. This is most true of Raiden, who once led the hard, debauched life of an outlaw, complete with an oft-referenced drinking problem, but who had turned his life around to better serve Bartok. When Bartok dies, however, Raiden slinks back into his troublesome earlier ways. He begins drinking copiously again, is rude and unpleasant to his long-suffering wife, and generally behaves like a man without a nation or a cause.

In the ultimate clumsy symbol to prove Raiden has turned his back on his noble ways and re-embraced his inner degenerate, he sells his sword, proving that his days as a dangerous threat to a corrupt emperor have reached a bleary, unhappy end. Even though Raiden makes an elaborate show of giving up, the powers that be still tremble in fear that he will sober up, regain focus, and lead a insurrection.

Raiden does eventually get his act together to become a leader, and the fearsome force his enemies fear him to be. But it takes a long time to reach that point, and the trip there is brutal for all the wrong reasons, mainly because it’s so achingly dull. Funded by Korean money, this old-school international hodgepodge production is weighed down by a lumbering humorlessness and a glacial pace that makes it seem far longer than its 115 minutes.

Much of Last Knights is shot in a darkness that obscures the action, which is of the brutally simple hack-and-slash variety anyway, so perhaps it’s good that so much of the film is difficult to see. The screenplay is similarly bogged down with tiresome monologues about duty, fate, and destiny, and no one seems to be enjoying themselves even slightly least. At least the upside to a dreadful film with the word “last” in its title is that it seems to preclude even the possibility of a sequel to this joyless, inky slog. Given the dispirited drudgery of Owen’s performance, it seems like he’d be the one least excited about a theoretical follow-up. He’d be better off taking a long nap instead.