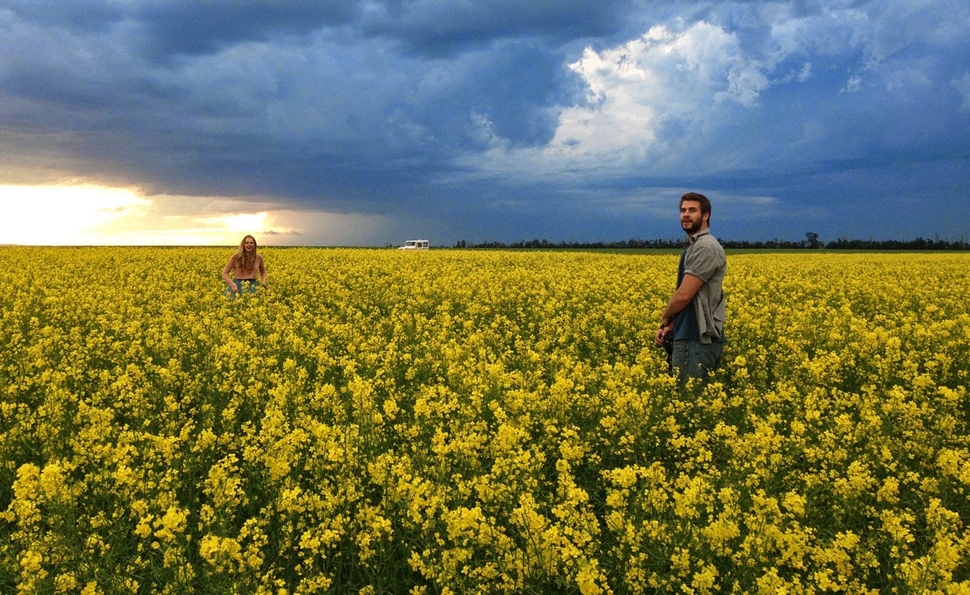 Outwardly, Matt Shakman’s big-screen debut, Cut Bank, affects the appearance of a top-tier movie. Visually, it certainly resembles a top-tier movie: Cinematographer Ben Richardson captures the fading pastoral beauty of the eponymous Montana town with the same wide eye he brought to Beasts Of The Southern Wild. It’s full of heavyweights from top-tier movies, including John Malkovich, Billy Bob Thornton, Bruce Dern, and Oliver Platt. Its plot even treads the same backwater paths that some top-tier movies have already trod. But they’re the exact same paths, which is where the trouble starts.

Cut Bank is not a top-tier movie, and not just because scriptwriter Roberto Patino cherry-picked his favorite elements of Fargo, No Country For Old Men, (the Coen is strong with this one), and Killer Joe, slapped a new coat of varnish on them, and called them his own. There are deeper, weirder problems at play here than a simple charge that the film is derivative.

Foremost among them is Liam Hemsworth as Dwayne McLaren, a restless native of Cut Bank who spends his waking hours California scheming. He and his lady-love, a pageant-queen hopeful named Cassandra (Teresa Palmer), foster ambitions too large for their tiny Montana hamlet, and have resolved to go west or bust. Turns out the “or bust” part isn’t a joke. Dwayne’s harebrained plan to “accidentally” catch the staged murder of a mailman (Bruce Dern) on camera in order to claim the Postal Service’s $100,000 reward for hard evidence is practically success-proof. When weak-stomached Sheriff Vogel (John Malkovich) starts poking around and USPS Inspector Joe Barrett (Oliver Platt) demands to see a corpse before he starts writing checks, Dwayne’s Jenga tower of a plan begins to teeter dangerously. All the while, the body count slowly ticks higher.

Hemsworth and Palmer would ideally provide this chicken-fried neo-noir with its moral core, but Cut Bank’s center cannot hold. Hemsworth is outdone at every turn by character actors firing on all cylinders, and he drags the morbid fun down every time his somber face appears. Realizing the role’s full potential would require a careful balancing act—playing the man’s underlying cowardice against his strong and silent exterior, countering his ethical lapses with his decent intentions—but just like Dwayne, Hemsworth gets in way over his head. Even in close-up, he feels like the least interesting character in the frame.

The most interesting character also happens to tidily encapsulate Cut Bank’s central shortcoming. Michael Stuhlbarg, primarily known as A Serious Man’s put-upon nebbish Larry Gopnik and gangster Arnold Rothstein on HBO’s Boardwalk Empire, splits the difference between those two roles to create something hypnotically transfixing. Stuhlbarg plays Derby Milton, a stuttering recluse who only slithers out of his secluded cabin to retrieve a p-p-p-parcel he hasn’t received due to the recently “murdered” mailman. (For one of the film’s funniest running jokes, every character greets Derby by cheerfully announcing that they assumed he was dead.) Derby was transparently conceived as a clone of Anton Chigurh from No Country, but Stuhlbarg manages to elevate the role above mimicry and beyond a cheap collection of quirks. Derby is a loaded gun in Coke-bottle glasses, punctuating his meek stammerings with bursts of unfathomable violence.

But Stuhlbarg is a little uneven with Derby, and Cut Bank is frightfully so. Sometimes Stuhlbarg appears to take the little fellow seriously, sometimes he plays him like a total loon. (Then there’s the third act’s denouement, which reveals a vein of blood-curdling craziness not even hinted at by Derby’s performance thus far.) Still, that inconsistency is nothing in comparison to the film’s huge vacillations in tone.

For the most part, the characters onscreen speak and act like human beings—except for the moments in which they really, really don’t. It’s as if the only weather-beaten DVD the township of Cut Bank has access to is The Counselor, and its off-kilter dialogue has heavily influenced the local vernacular. Patino likes to cram the occasional misshapen or entirely nonsensical phrase into his players’ mouths, which makes for erratic shifts. Some of it could be fairly written off as local color, or noir-aping flourishes. (For instance, everybody in Cut Bank refers to Washington, D.C. exclusively as “the nation’s capital.”) But this exchange, in which one character surprises another while sleeping, conveys the ridiculousness more clearly:

“I thought you were the God-forbid!”

“I am the God-forbid… Here you are, off in the Land of Nod with the jazzy playing and beer cans all about. You gotta be the most fat-headed ass.”

This Bizarro-universe Coen brothers mash-up has the decency to be sporadically fun, even when it isn’t especially original or steady. Rip-off or no, there’s no debating the magnificence of a decrepit, drunken Bruce Dern wrasslin’ with an alien-ish Michael Stuhlbarg. It’s a top-tier moment in a merely mid-tier movie.