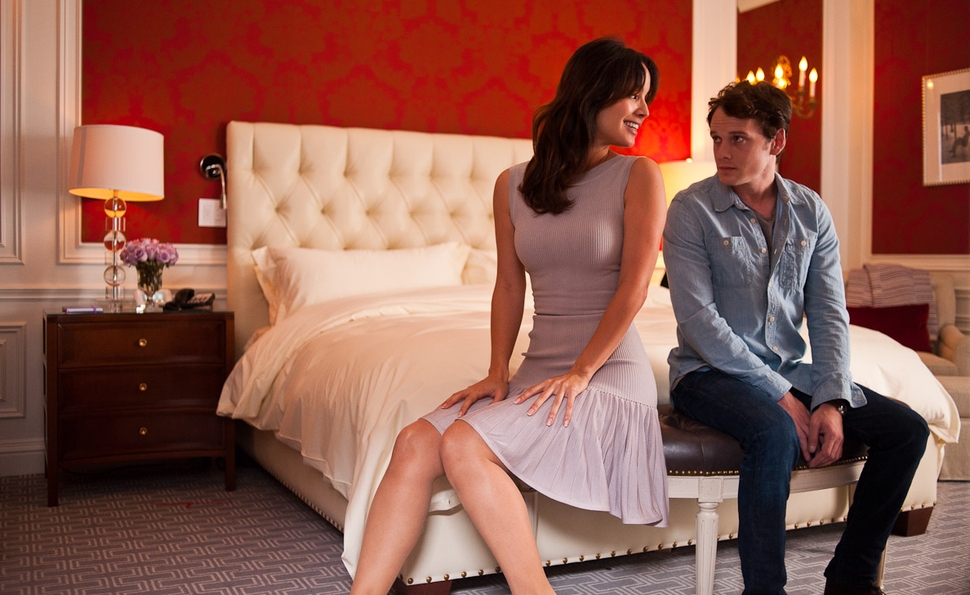 In Victor Levin’s appealing romance 5 To 7, Anton Yelchin plays Brian Bloom, a young fiction writer who’s determined to reach the literary mountaintop by climbing a pile of rejection letters. And the love story within the film is presented like his big break: Yelchin frames it with the Central Park cutesiness of When Harry Met Sally, waxing rhapsodic about all the great stories behind the inscriptions in park benches, and offering what follows as one of his own. The device itself is a cloying touch, and makes Brian sound like he’s earned every curt form letter tacked to his wall. But it also couches the romance in fantasy, which helps the film’s broad, self-serving caricature of French values come across with the lightness and sweetness Levin intends. Otherwise, it would be the tale of a magical Frenchwoman who validated Brian as a great person, a great writer, and a great lover, before floating off into the ether.

Though Brian’s struggles as a writer give 5 To 7 a necessary note of self-deprecation, it’s his inexperience that comes through most in his dalliance with a married woman, which sometimes plays like Ben Braddock and Mrs. Robinson with an international twist. (Levin is a wise enough writer to steal from the best.) It’s love at first sight when Brian spots the beautiful Arielle (Bérénice Marlohe) across the street and she returns his interest, despite his fumbling attempt to compare her to Ariel from The Little Mermaid. As it happens, Arielle is happily married to a diplomat (Lambert Wilson), with whom she has two children, but she nonetheless makes herself available to him from 5 to 7, that twilight period where the French allow themselves to have affairs. Brian initially bristles at the thought, but Areille’s husband also has a younger American on the side—a book editor, conveniently enough, played by Olivia Thirlby—and perhaps it’s time to question his prudish inhibitions.

There’s an easy, shake-and-bake tension here between American notions of fidelity and commitment and more libertine European values that 5 To 7 plays out to predictable effect. Much as Arielle’s openness has its appeal—all the fun parts of a relationship, with none of the hassle; a husband who happily consents to being cuckolded—love is not so easily compartmentalized. Though Marlohe adds shades of complex emotion to Arielle, who also finds the situation increasingly untenable, too much of 5 To 7 is Brian’s tribute to himself. He’s smart, sincere, funny, good-hearted, and transcendent in the sack, and their affair does nothing but affirm his best qualities and give him the adult experience necessary to impress New Yorker editor David Remnick. The drizzle of melancholy can hardly be tasted on the giant hot-fudge sundae life has bestowed upon him.

And yet, accepted as fantasy, 5 To 7 has a bright, literate charm that’s hard to resist, thanks to the scattered witticisms in Levin’s script, a deftly managed tone, and fine performances across the cast, especially the always-vibrant Thirlby, or Glenn Close and Frank Langella as Brian’s eccentric parents. The film accomplishes some of what Woody Allen’s Vicky Cristina Barcelona did on the other side of the Atlantic, playfully pitting American and European notions of love against each other. Though its conclusion says more about Brian’s perception of the relationship than the truth of it (see The Reveal for more), 5 To 7 beckons its viewers to enjoy its two-hour indulgence in a same way he and Arielle do theirs—without making a big deal out of it. On that level, it’s an agreeable diversion.