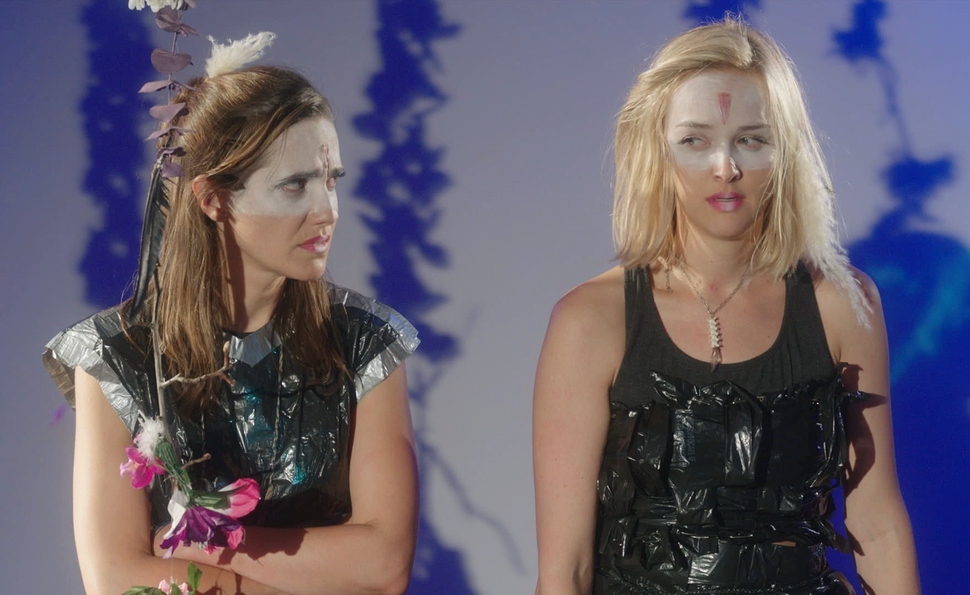 Finding suitable housing in New York City is a notoriously tricky endeavor, an expensive and emotional undertaking that can make even the most hardened residents go totally batty. Olivia (Jennifer Prediger) and Nicole (Jess Weixler) have been through it before, and come out the other side with an enviable walk-up in the East Village, complete with a workspace for their artsy tendencies and a landlord (Jeffrey Tambor) who is far more lenient than many. It’s a dream! The problem—or, more precisely, the “troubles”—at the heart of Apartment Troubles isn’t about getting an apartment, it’s about holding on to one. And when you’re as unstable and immature as Nicole and Olivia are, that’s trouble enough.

Nicole and Olivia have big dreams—Olivia wants to be an actress, Nicole is a prolific artist and sculptor—but neither is especially ambitious about making those dreams happen. That lackadaisical approach extends to making even basic things happen, like paying their electricity bill or buying enough food to keep from keeling over from hunger. Their bohemian lifestyle is initially passed off as a quirky and whimsical choice—No food? They’re on a juice fast! No power? They don’t want to contribute to pollution!—but they’re teetering on the edge of genuine disaster. Hit by the one-two punch of eviction and pet death, the shiftless duo refuse to spring into action, and instead opt for the most cowardly choice: They leave.

Despite their characters’ inability to function as adults, both Prediger and Weixler deploy enough charm to keep Olivia and Nicole engaging and interesting to watch, and their chemistry gives their on-screen friendship the kind of substance so often lacking in stories about shiftless millennials. The threat at the heart of Apartment Troubles is a real one—that these girls could actually end up homeless—but the film is remarkably good-natured, and Weixler and Prediger keep things on an even, enjoyable keel. Good friends in real life (they even briefly lived together), Prediger and Weixler also co-wrote and co-directed the film, and their personal and creative bond elevates the material.

Prediger and Weixler shade Olivia and Nicole with small details that illuminate the codependent nature of their friendship—for one, they share a single cell phone—while also making it clear that neither is emotionally equipped to discuss the real problems bubbling under the surface. On the page, neither Olivia nor Nicole is especially likable, but their deep (yet still troubled) friendship humanizes both of them. Even when their characters are exhibiting maddening characteristics, Weixler and Pedigree’s sweetness keeps the dippy buddy comedy afloat.

The girls temporarily abandon New York City for Los Angeles, where an awful mini-vacation and one heck of a bad reality-show audition await them, along with Megan Mullally as Nicole’s terrifyingly touchy aunt. Although the cracks in their friendship begin to reveal themselves before Nicole and Olivia make their way out West, things are only exacerbated by their trip and the pressure of their so-called apartment troubles. Moving the action to Los Angeles is the film’s biggest misstep, and although the change of venue allows for the appearance of some funny supporting characters (Mullally is amusingly unsettling, while Will Forte pops up as a deranged fellow traveler), Apartment Troubles is at its best when it’s confined to the claustrophobia of New York City.

Still, Apartment Troubles consistently finds opportunities to subvert expectations and tropes in an appealing fashion. Even seemingly egregious Los Angeles cliches, like visiting a tarot card reader for advice, are gently twisted into something pleasing. (The joke of the tarot card reader isn’t that she’s a hippie who doesn’t know what she’s talking about, it’s that she’s one of the few characters who actually understands the demands of real life.) Olivia and Nicole might be troubled by their inability to turn creativity into substance, but Weixler and Prediger have no problem doing just that.