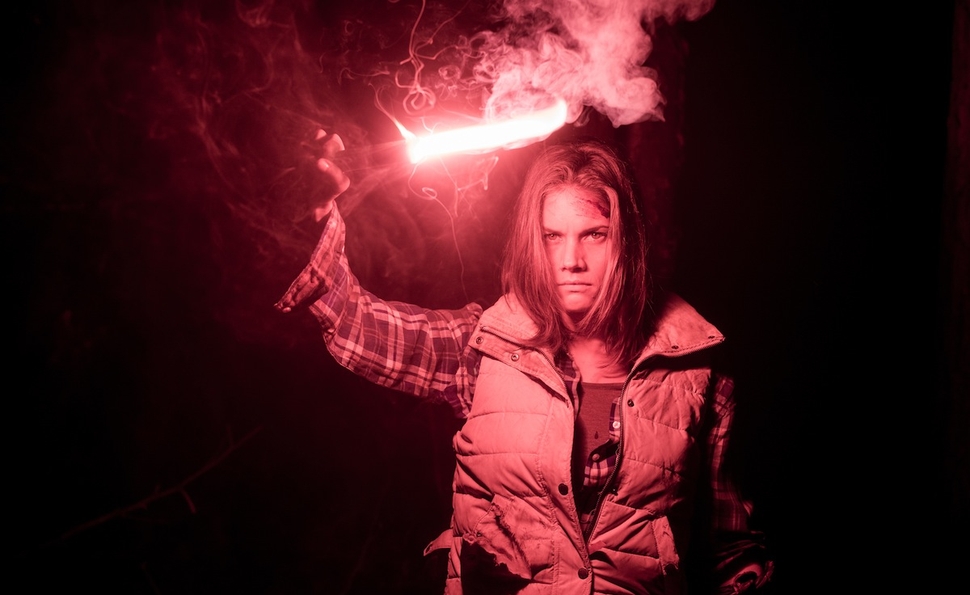 As a location, “the woods” are freighted with symbolic significance: They’re a space outside civilized society, where people can go to be exempt from the law of man and tap into a rawer, more primal way of being. Hester Prynne and Arthur Dimmesdale took to the woods to consummate their love affair away from watchful Puritan eyes; the forbidding, untamed wilds of the woods paralleled the animalistic acts of depravity perpetrated on four unsuspecting city-dwellers in Deliverance.

Backcountry, the directorial debut from C-list Canuck actor Adam MacDonald, also mines the woods’ potential to break down manners and other minor niceties. The woods become a crucible for the relationship between Jenn (Missy Peregrym) and Alex (Jeff Roop), testing its tensile strength until it reaches the point of splintering. But MacDonald elevates Backcountry by couching what turns out to be a keenly observed relationship drama inside a horror flick, whose star has exponentially greater staying power than any man or woman onscreen: It’s a bear.

It’s somewhat baffling that bears rank so low in the Grand Hierarchy Of Horror-Movie Nemeses. They’re huge, which makes their nimble speed even scarier. The first half of the 2010s has seen 16 North American bear-related fatalities, compared to a measly five from the shark community. All the more unjust, then, when 1976’s Grizzly ended up being a pale imitation of Jaws. (The other entry in the lamentably small canon of bear-terror, The Edge, sticks Bart The Bear in the back seat behind David Mamet’s dialogue and Alec Baldwin and Anthony Hopkins performances that chew as much figurative scenery as the bear chews literal anything.) At long last, MacDonald does right by the noble bear, eking every available iota of growling menace from the mountain of fur and claws that lumbers into the film in the second act.

Deep, deep in the second act. The bear only enters the picture around minute 70 of this 90-minute film, and MacDonald fills the preceding time by fleshing out the relationship between his two non-bear performers. Alex has taken his girlfriend Jenn out for a weekend trek to camp on a lake in the Canadian wilderness, where he traveled with his father when he was younger. Because Alex repeatedly does unadvisable things such as covertly stealing Jenn’s phone and stashing it in the car for a truly unplugged weekend, or insisting on navigating the woods without a map, they get inexorably lost. The resulting aggravation brings simmering resentments between the two to a boil; minor squabbles over trivialities like gathering firewood and rationing food metastasize into sweeping arguments over the faultlines in their love’s foundation. For a moment, it seems like the greatest threat to Jenn and Alex might not be the elements, but each other.

And then: Enter a bear. MacDonald doesn’t drop the beast in completely out of nowhere; Backcountry flirts with the trappings of the horror genre well before the bear makes itself known, layering on foreboding ambiance courtesy of a creepy ranger (Nicholas Campbell) and a creepier tour guide (Eric Balfour). But when the film pivots, it pivots hard. One hour in, Backcountry shifts gears from a naturalistic relationship drama to a no-holds-barred survival nightmare, and there’s no contest over which mode is a better fit for MacDonald. He never overplays his action scenes, leaving the most intense sequences stripped of Frères Lumières’ score, or completely silent. He rightly trusts his ursine star to do ample scaring without the aid of flashy camerawork (MacDonald mostly shoots those bits erring on the side of horror, with a shaky-but-not-too-shaky handheld) or a mood-setting soundtrack.

Realistically speaking, Backcountry will probably not do for forests what Jaws did for open water. But the film still hits the disparate targets it aims for, managing the character work until it gets to the fireworks factory. (Which is, in this instance, full of bears.) If there’s any justice in this world, Backcountry will be the vanguard of a rich, lengthy bear-terror renaissance. But if not, we’ll still have this solid, well-executed testament to the horrors of the great outdoors.