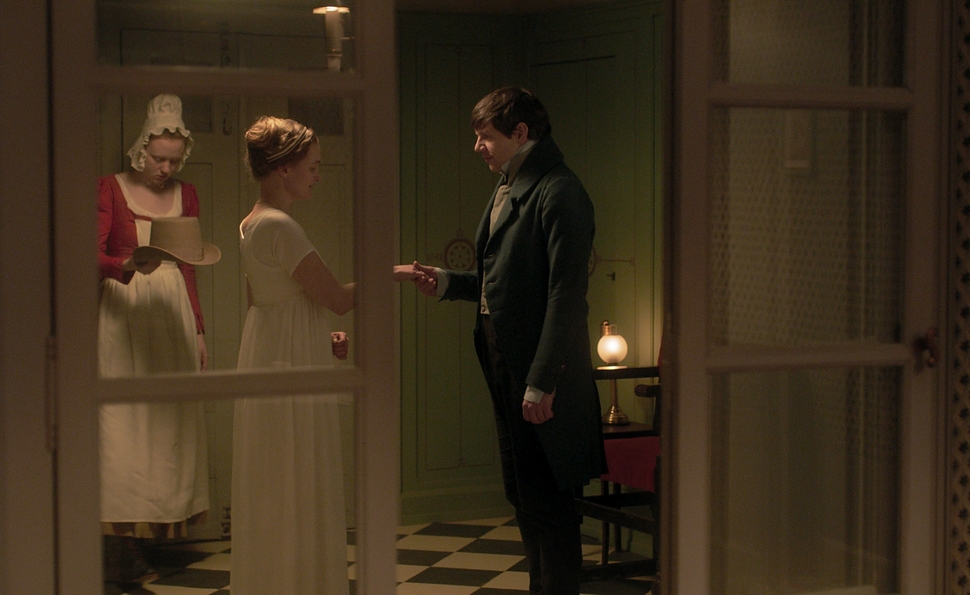 On November 21, 1811, the famed German writer Heinrich von Kleist (“The Marquise Of O,” The Prince Of Homburg) and a married woman of his acquaintance, Henriette Vogel, committed suicide together by the shore of a small lake, where their bodies are still buried today. Kleist shot Vogel with a pistol, then shot himself; the two of them planned it together, though, and both left behind multiple letters to friends and family explaining their reasons for not wanting to be alive anymore. Jessica Hausner’s Amour Fou, which dramatizes this infamous suicide pact, sticks pretty closely to what happened, but the film is still very much a fictionalization of Kleist and Vogel’s relationship, which it presents as both a droll, twisted comedy of manners and a referendum on the 19th-century German aristocracy. It isn’t exactly funny, however, and its sociopolitical subtext, while pointed, has no perceptible present-day resonance. Mostly, it’s just expertly bloodless—a series of beautifully composed tableaux stripped of all passion. It’s as if Hausner had no greater goal in mind than to make her title, which means Crazy Love, seem dully ironic.

To that end, she’s cast two remarkably unprepossessing actors in the lead roles. As Kleist, Christian Friedel speaks every line with a clammy earnestness that’s grating to behold, and otherwise stands with his arms straight at his sides, twitching his fingers nervously. Early in the film, he tells his cousin, Marie (Sandra Hüller, from Requiem and Brownian Movement), that the world fills him with dolor: “I have become so sensitive that even the smallest of onslaughts to which my feelings are exposed causes me the greatest of suffering.” When he pleads with her to die with him, however, she all but laughs in his face. Only when he meets Vogel (Birte Schnoeink), who finds him oddly fascinating, does his quest for mutual oblivion start to get some traction. Soon after he proposes his plan, she mysteriously falls ill, and while doctors initially can find nothing physically wrong with her, suggesting the problem is psychosomatic, she’s eventually given a diagnosis of terminal cancer, which makes it easier for her to fulfill Kleist’s fondest wish. Schnoeink’s deliberately wan performance suggests that ceasing to exist won’t be much of a sacrifice.

In real life, Vogel was dying. “The autopsy confirmed,” reads the official inquest, “that the deceased female was suffering from incurable cancer of the uterus, which doomed her to a slow and cruel death.” In the movie, by contrast, her doctor shows up at the end, with egg on his face and further test results in his hand, to reveal that she was actually in perfect health. That isn’t necessarily grounds for complaint (“What Amour Fou Gets Wrong About Post-Enlightenment Literary Scandals”)—Hausner has every right to reimagine this event for her own dramatic purposes. Trouble is, it isn’t at all clear what those purposes are. Whenever the film’s supporting characters are talking at dinners and parties, the topic of conversation is invariably a new tax being instituted in the Prussian kingdom, which will apply equally to the rich and the poor; the men in particular are appalled by the idea, wondering aloud if freedom for the serfs is worth the burden of their having to pay taxes, and grumbling about having to pay themselves. By straining, it’s possible to connect this privileged whining to Kleist and Vogel’s joint death wish, but it’s hard to be moved by an interpretation that’s offered so bluntly, yet demands so much huffing and puffing.

When Amour Fou premiered at Cannes last year (out of Competition), its champions—and there were quite a few—tended to emphasize its comic aspects, and that’s probably how the film is best approached. Admittedly, there’s something bleakly amusing about the disjunction between the gravity of Kleist’s plan and the casualness with which he proposes and discusses it; even later in the movie, when he and Vogel declare their undying mutual love, they do so with the studied, uninflected demeanor of two university students quizzing each other for a psychology exam. A little of this blasé indifference to life goes a long way, however, and eventually, a corresponding indifference on the audience’s part begins to seem like the only rational response. Amour Fou’s foreground action is so tepid that it’s frequently upstaged by the hideous wallpaper in Vogel’s house: an olive background geometrically studded with tiny black flowers. Hausner’s previous feature, Lourdes, was sometimes frustratingly opaque, but at least it had a discernible pulse. Here, she seems more interested in period décor and symmetrical compositions than in Kleist, Vogel, or any of the ideas they espouse and/or embody. Her impressive formalism is hollow.