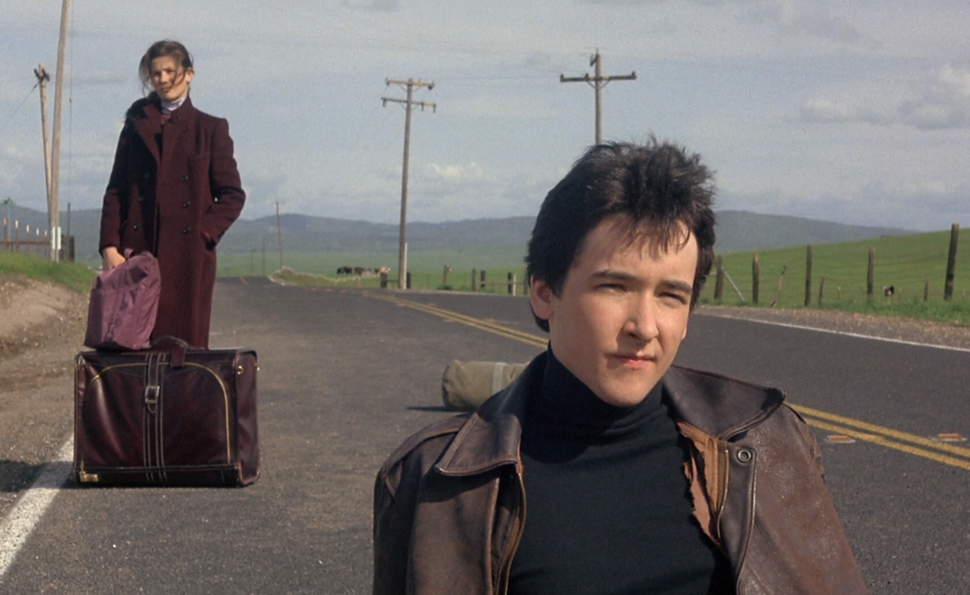 Early in his career, part of Rob Reiner’s talent was figuring out the future by drawing from the past. Reiner’s When Harry Met Sally... shamelessly lifted the structure and urbane banter of Woody Allen’s Annie Hall with an eye toward a broader audience, providing what would become the template for the modern romantic comedy. Four years earlier, with The Sure Thing, Reiner co-opted a market clogged with dumb sex comedies by updating the cross-country romantic adventure of It Happened One Night. In the process, he made a star out of 17-year-old John Cusack and offered critics the adjective “refreshing” to describe a movie that looked like another Joysticks or Screwballs, but was grounded in something approximating reality. In truth, The Sure Thing is queasily old-fashioned, a raunchy road trip without the raunch that nonetheless trades on sex-comedy stereotypes: party animals in Hawaiian shirts, tea-sipping no-fun-niks in neutral-colored sweaters, and a compliant blonde sex doll that is, in fact, a sure thing. The film takes baby steps to something better.

Released on Blu-ray for its 30th anniversary—let that sink in a little, old-timers—The Sure Thing succeeds most in identifying the self-effacing charm that would become Cusack’s stock-in-trade as a young romantic lead. Say Anything... seized on it more effectively a few years later, but from The Sure Thing’s opening scene, in which he tries haplessly to turn star-gazing into a pick-up maneuver, Cusack comes across as a gentler, more approachable alternative to the usual sex-comedy skirt-chaser. He stars here as Walter “Gib” Gibson, a high-school graduate who spent his senior year striking out with women. Things don’t get any better at his stuffy Eastern college, and he bristles at reports from his best friend (Anthony Edwards) that the women at his West Coast school are gorgeous and willing. (So far, the premise is a Beach Boys song that David Lee Roth would cover that same year, but stay with us.) When his buddy informs him of a “sure thing” (Nicollette Sheridan) waiting for him in a white string bikini, Gib embarks on a desperate cross-country to get there, accompanied by Alison (Daphne Zuniga), an uptight student en route to visit her boring boyfriend.

Short of mounting the “wall of Jericho” in a roadside motel, The Sure Thing slavishly re-creates the It Happened One Night dynamic, only with the gender roles reversed: Cusack in the Claudette Colbert role of the free spirit looking to escape his hidebound life, and Zuniga in the Clark Gable role of his mature, rational counterpart. They will meet somewhere in the middle—Alison learns how to shotgun beer, Gib learns that a brainier woman trumps his juvenile fantasy bot—and they do it on the open road, through hardship and hitchhiking, and sharing the last stick of gum when they’re penniless and starving. Of the two, Cusack gets virtually all of the laugh lines—a trend that would continue in When Harry Met Sally..., which sometimes plays like Meg Ryan reacting to a Billy Crystal stand-up routine—but the film is loaded with memorable on-the-road episodes (Tim Robbins and Lisa Jane Persky as a showtunes-happy couple is a particular standout), and the leads have good chemistry.

Working from a script by first-timers Steven L. Bloom and Jonathan Roberts, Reiner made a college sex comedy that’s resolutely old-fashioned without seeming reactionary. The Sure Thing isn’t prudish for dialing back the raunch of Porky’s and its imitators, but rather savvy in the way it promises another Porky’s as a bait-and-switch, hoping that audiences, too, will evolve just as Gib does. The Sure Thing isn’t nearly as brilliant as Reiner’s This Is Spinal Tap and it’s not as sophisticated as When Harry Met Sally..., either, but the It Happened One Night plot provides a sturdy-enough framework to get it past those stretches when it resembles the frat comedies it’s trying to transcend. But ultimately, it endures for breaking the bottle on the good ship Cusack, who’s spontaneous yet sensitive, the kind of guy who can party all night and still stick around to cuddle in the morning. He’s a keeper.

All the supplements are lifted from a previous edition. The half-hour making-of featurette isn’t all that compelling, because The Sure Thing wasn’t difficult to make. The script had a little trouble finding a home, because its authors were novices, but Reiner came on board immediately and the production sounds like smooth sailing. Better is Reiner’s commentary track, in which he acknowledges his debt to It Happened One Night and Preston Sturges comedies, and admits to his squeamishness in directing a teen sex movie. In fact, Reiner was so uncomfortable that he wasn’t present on the set for the title sequence, in which Sheridan oils herself up on the beach. That duty fell to cinematographer Robert Elswit, who would go on to shoot the California hardbodies of Paul Thomas Anderson’s Boogie Nights and Inherent Vice.